Fans of MTR know that I love a good comedy. So much so that I joke on Rich regarding his stricter taste regarding the genre. This appreciation definitely carries over to anime as you will see in today's pick. The 31 Days of Anime spotlights a classic from Rumiko Takahashi. Said classic is the long running television show Ranma ½. The life of a career martial artist can be a difficult one. Devoting your very being to training and the pursuit of strength can make the normal life of a teenage boy a difficult one. This tale shows how the opposite sex can seriously compound those daily challenges. 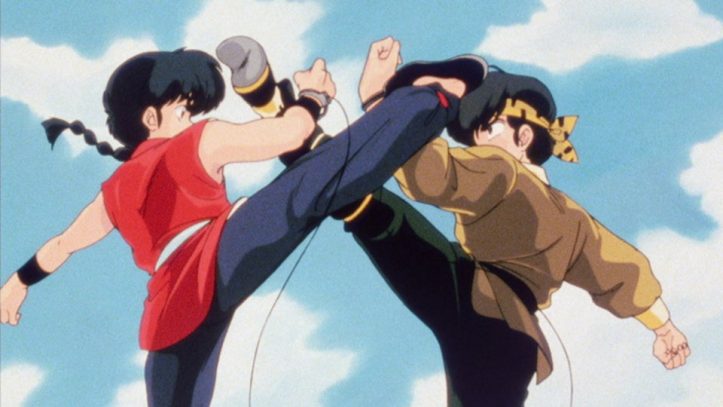 The story tells the tale of the Saotome clan, consisting of father Genma and son Ranma. They had been travelling for years to train in the Musabetsu Kakutō Ryū. This is better known as the “Anything Goes” Style in English. Both were extremely proficient in their skills; the ability to spar with nothing to stand on but bamboo reeds was proof. Unfortunately, they both fell during said training into a pair of cursed pools in China. The curse would turn the victim into whatever drowned in that specific pool when doused with cold water. They would remain that way until splashed with hot water. Genma found himself transformed into a Panda Bear; he rather enjoyed it. Ranma was not so happy; he found himself transformed into a beautiful, teenaged girl.

The “men” settled in Japan shortly after, as part of a promise to Genma's friend, Soun Tendo. Their children were to marry to carry on both the Anything Goes Style and the Tendo dojo. Much like Genma, Soun's three daughters train in the style. Most proficient and closest in age to Ranma is Akane Tendo. She is chosen to be Ranma's bride because of her age and her dislike of men; they figure Ranma is perfect since he is only a man half of the time. A rocky relationship blossoms over seven seasons and several movies as Ranma gains those that would defeat and or kill his male side but fall in love wit hthe female and vice-versa.

As one of the funniest harem style anime ever made, I would highly recommend this to those interested in the genre. The entire TV show is available on blu-ray and the movies and OVA will be on blu-ray next year. Admittedly, later episodes show that the series ran a bit longer than it should have, but if you make it that far you probably will not care. I thoroughly enjoyed this show and strongly recommend it.