“I felt like an avenging angel, what I looked like was a fat bald guy with a bad temper.” Max Payne 3 is full of these types of stellar quotes and even more  stellar action this is the best game in the series and possibly the best game to have come out this year. From start to finish this game plays like a big budget well written action film. James McCaffrey does an excellent job as Max, really making you feel how little he cares for his own well-being and is still torturing himself over the death of his wife and daughter. The game keeps its noir feel with a non linear story that pieces together through flashbacks, building up to the final act. This is not a story of redemption for Max; he himself points this out. Max has hit rock bottom and with nothing left to lose he  hopes this last mission may actually kill him. The game takes place seven years after the events of Max Payne 2 mostly in Sao Paulo, Brazil with occasional flashbacks to New Jersey. Without spoiling the story, I can tell you that everything goes to hell after a woman Max has been paid to protect has been kidnapped. Trust me when I say that you will want to find out what exactly is going on and how it all unfolds.

This game is absolutely beautiful. From the slums of Brazil to the New Jersey projects, Rockstar manages to make the grimiest environments look pretty on screen. Max’s movement has been revamped as well. In the first two games he came off as robotic and didn’t really move like a normal person. In this game Max moves with fluidity from the way he loads his gun to the way he flinched when a bullet hits the wall he is against. This is one of the best looking games I have played in some time and Rockstar really has stepped up their game from even titles like GTA IV and Red Dead Redemption.

This game plays similar to the fist two games but the mechanics work very differently. The first two games relied upon the bullet dodging to avoid getting hit; this installment almost makes the move a non factor. There are huge chunks of the game where I didn’t use the bullet dodge at all because most of your gun fights happen in congested areas where you will just bang against the wall and get killed. You have to use the cover around you to be affective in this game and it is a better shooter because of it. Your enemies in this game work differently depending on who they are. The militia flanks you and uses cover effectively while the Brazilian gangsters run around shooting like crazed idiots. The game doesn’t take bullet time out at all with multiple action moments that slow down time and have you do cool violent things. The only real gripe I have with the game is occasionally you run out of ammo for no apparent reason. It makes no sense that everyone else is getting ammo and I am dying and there are no bullets anywhere for me to use. The game is difficult without being unbeatable and you will die multiple times, but instead of frustrating you it just makes you want to beat certain sections even more. The gameplay is also extremely linear; you will not have any option of handling certain things differently than the game wants you to point-blank. This isn’t a bad thing just counter intuitive sometimes because there are missions where they give a silencer but as soon as you kill anyone it turns into an all out gun fight which makes you question what the fuck was the point of the silencer in the first place.

The online in this game is fun and fast-paced. While I won’t say it is the best multiplayer game I have ever played, it is a good time for everyone to enjoy. The action keeps you on your toes and a group of friends will have a blast with this. 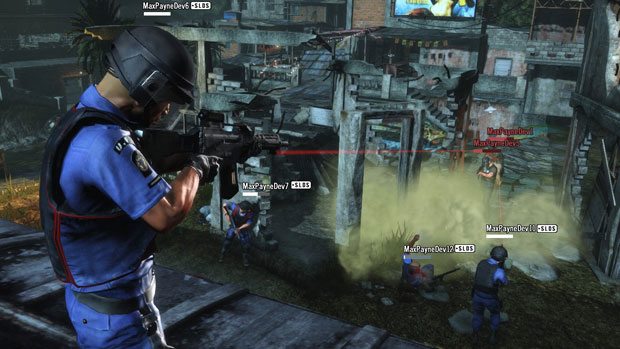 This is a game about an extremely  fucked person who you get to control while he kills a crazy amount of people. The game looks great and is paced beautifully. I found the gameplay to be amazing overall; what more can you ask for out of a great game.