My Take On: Evil Dead 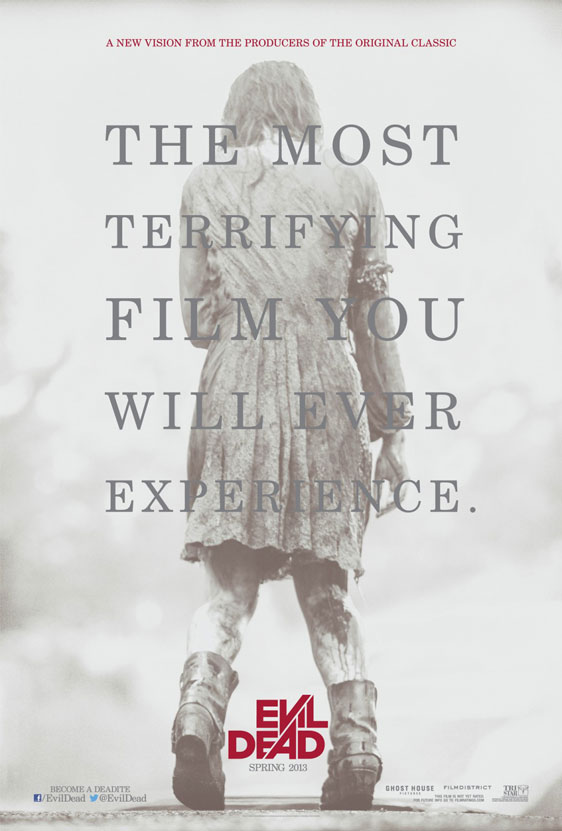 When five friends head to a cabin to stage an intervention  for one of their own they discover a “Book of the Dead” that unleashes an unspeakable evil.

Since it was tough to find some of the more violent and gruesome scenes, I figure the red band trailer should suffice.

If you are a fan of horror films the Evil Dead series has graced your television on more than one occasion. Fede Alvarez was tasked with not only giving viewers a new vision of a storied franchise but to also in some ways capture the magic that made the original film great.  I initially felt that remaking something as iconic to horror fans as Evil Dead would sully the universe Sam Raimi created. I was pleased to see Raimi involved, as that softened my stance on this remake and Bruce Campbell’s blessing was the icing on the cake. Now, this movie is by no means a horror masterpiece nor does it have the light-hearted elements of Army of Darkness to call its own – instead it delivers a visceral and gruesome product that is high on gross but lacking in fear or suspense. The overall core concept of film was definitely solid and the cast was shockingly better than I expected but I felt the gore was a crutch in some parts. Now before anyone jumps the gun thinking I completely hated this film or that it's shit you’ll be disappointed to hear that is not the case. This new version of Evil Dead succeeded in carving out its own niche and laying the foundation for a new mythology that will connect with today’s audiences; who in my opinion have to come to appreciate the gore and dismemberment that are standard in today's horror films over solid jump of your seat scares. I blame this shift on films like the Saw franchise which made dismemberment supersede fear and suspense.  Fede Alvarez had big shoes to fill and he managed to do that to some degree with ample nods to the source material. The box office totals don’t lie in that regard. I have to commend Jane Levy for her work as Mia as her performance was definitely a high point in the film. I also felt Lou Pucci’s Eric was solid as well and provided some comedic elements, albeit at times inadvertently. Lastly, the effects were a high point because they relied very little on CGI and instead utilized practical effects which definitely added to the grit and overall feel of the film.

I can sit here and tell you this film is decent and worth a watch or I can tell you it sucks, but honestly everyone who has seen it besides me is actually torn between thoroughly enjoying this film or deeming it shit much like me so I am going to break this recommendation down a bit differently. If you are fan of the camp and light-hearted scares of the the Bruce Campbell films you may not enjoy this more violent approach. If you appreciate some good dismemberment and don’t turn away from blood and guts then this film is worth checking out as it delivers that in spades.  I personally liked the approach even though it needs a bit more polish which I hope we see in later films. I would like to close out by saying STAY AFTER THE CREDITS! Old school Evil Dead fans will appreciate the fan service.