Quark’s Corner- Saints Row IV: How the Saints Save Christmas

Saints Row IV: How the Saints Save Christmas (HTSSC) is the second and last (?) of the Saints Row IV DLC and boy does it deliver. HTSSC deals with the Saints trying to stop an imposter Santa Claus from, and I quote, “putting the entire universe on the naughty list.” HTSSC comes with the season pass of Saints Row IV or is seven dollars by itself and is one of the best DLC’s  I’ve played in a long time. While the game offers up only about 2 hours of actual story missions, there are activities you can participate in once you are done and you can always replay the missions. While the price tag may seem steep to some for the small amount of content, here are three reasons why I think everyone should pick up HTSSC. 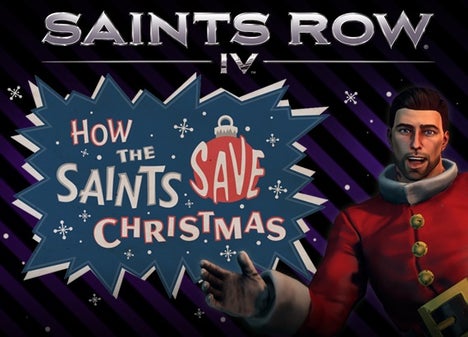 I played the shit out of Saints Row: The Third as well as played each one of it’s DLC packs, and I can safely say that each one felt like a bad cash grab. Genki Bowl felt like cut activities that should have been included in the base game, Gangstas in Space simply wasn’t fun or funny, and Trouble with Clones was way too short and simply teased the super power angle found in Saints IV. But here we have a short little DLC that hits all the notes of what makes Saints Row great. Humorous characters and interesting twists on the game's almost stale combat. There were moments that you will crack up and other moments where you’ll be at the edge of your seat, it’s the perfect mix of combat and humor. I don’t want to spoil a lot, but let’s just say you have to assault the North Pole and kill giant elves…who are now the size of regular people.

Finally, completing the DLC actually feels like a reward. You actually get interesting vehicles, weapons and homies to recruit instead of the ho-hum unlockables of past Saints Rows. Several DLC’s have a problem; once you finish the DLC, you no longer want to go back to the main game. However, all the shit you get from completing the DLC makes you want to go back and try out your new toys. Who doesn’t want to pilot a rocket-powered Santa Sleigh that shoots coal and present missiles?

While it is called How The Saints Save Christmas, other holidays are featured as to not alienate anyone. With that said, HTSSC feels like a Christmas classic that I can come back to every year and enjoy and laugh. I can easily say that HTSSC is the best Christmas game I have ever played. It also begs the question: why they didn’t release this as a standalone game and sell it on the online market? If Infamous: Festival of Blood did it for Halloween, why didn’t HTSSC? That doesn’t matter, because the fact is that HTSSC is a blast that everyone, especially Saints Row fans, should play.