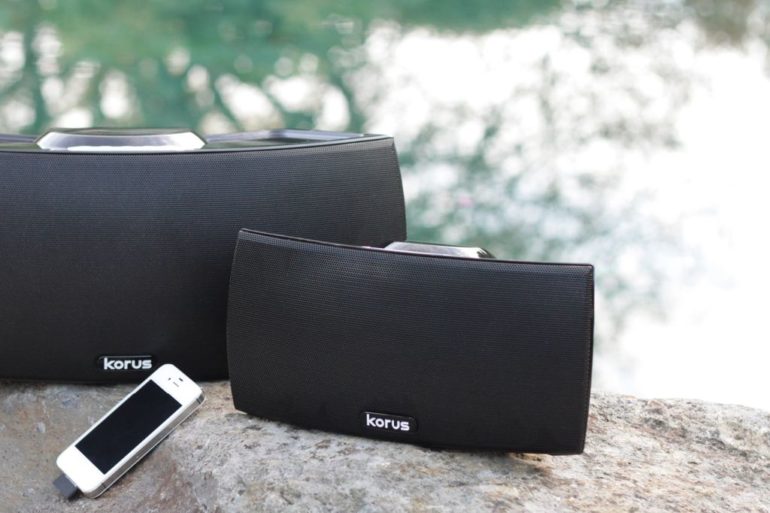 The Korus V600 and V400 are wireless speakers that do not rely on Bluetooth, NFC or Airplay to deliver audio from your iOS devices or your PC. They instead utilize SKAA wireless audio technology to deliver audio.

The Korus V600 and V400 pair with your iOS (via 30 pin & lightning) devices as well as PC’s and Macs (via USB) utilizing a baton connector system and SKAA wireless audio technology as opposed to Bluetooth, NFC or Airplay. The speaker also charges your devices with the included charging cables so you can enjoy your music, movies and games all while simultaneously charging your devices.

What’s wrong with it?

While the speaker system delivers stellar audio from iOS, Mac and PC’s, Android users are relegated to using a line-in connection, which is a bit disconcerting since it does allow the audio to sync to the V400 speaker. **I hope Korus releases a micro USB baton or at least adds NFC for Android devices since it definitely would increase it’s footprint in homes that do not use iOS devices. I also feel that the V400 and V600 would benefit from a physical remote. iOS owners do have the free Korus app to monitor audio and adjust volume, but in the event you can’t get to your iOS device, a remote would be a welcome alternative. At least then in my case I would pair it with my Logitech Harmony remote.

I know some may balk at the $399 and $299 MSRP, but when you compare Korus to companies like Sonos, Cambridge and even Bose I truly feel the pricing is competitive. However, I do think a smaller introductory speaker would definitely be more appealing, especially if it was less than $199 as it would allow Korus to get into more homes and become a name that people can recognize.

Why do you/don’t you need it?

You need it if you are looking for a wireless solution that doesn’t rely on Bluetooth pairing, Airplay or the always fun WiFi solutions currently utilized by the competition. The expandability component is a plus as well since it allows you to add a maximum of four units throughout the home with no loss of sound quality. Every genre of music was clear and crisp with room filling bass to boot. While the V400 is solid speaker, I do have to say the its “big brother” the V600 delivers a more immersive audio experience. The V400 in a smaller room packs a punch but in a larger environment it does not deliver the same impact. But again, one must consider room acoustics as well so everyone’s experience will vary.

A surprising feature that many of you may find appealing is that the V600 can run on “D” batteries giving an estimated 90 hours of playtime. During the summer when trips to the beach and outdoor picnics/barbecues are the norm, this will be a welcome perk.  I am bummed that the V400 does not have the same capability considering it has a carry handle and a more travel-friendly form that would make it  a must outdoors.

The stellar audio quality of the Korus speakers really surprised me not only because the audio was so crisp, but the connectivity was so simple and straightforward. It really is an idiot-proof system that would compliment the home of any iOS device owner. I am fortunate to have iOS in my house to fully test the capabilities of the system, but I must stress that Android users are left in the cold if they want to enjoy the speakers’ full benefits – at least for the time being. **Korus has reached out to us to let us know that a micro USB baton can be expected this year. While the Android issue is a minor one with a remedy in sight, it is worth noting but in terms of product and sound quality I have to say that Korus is taking no prisoners and is a worthwhile purchase for those looking to step into the wireless audio system arena.

We’d like to thank Scott Porter from Korus for allowing us to demo the unit over the last few weeks. You can pick up a Korus unit by heading to KorusSound.com. You can also visit Korus at their Macworld booth from March 27-29  where they will be giving away one of their V600 units.  If you want to buy a V600 or V400 head over to korussound.com .