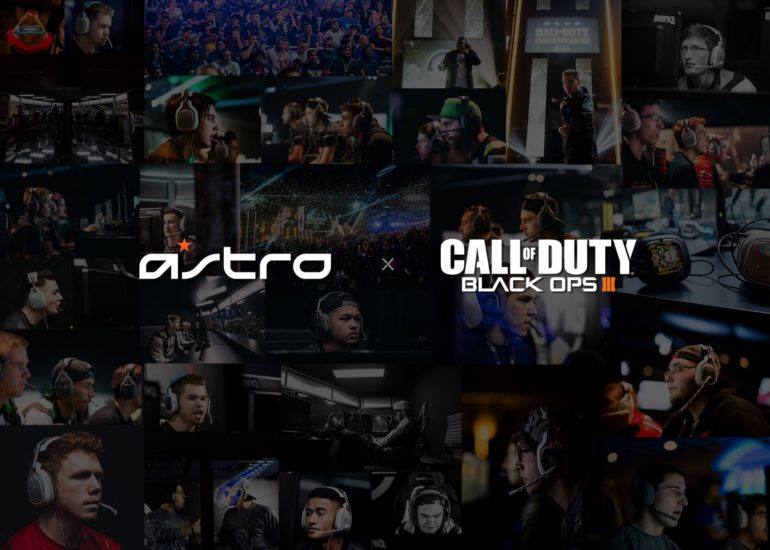 ASTRO announced earlier today that they will be partnering with Activision and Treyarch to release new headsets and accessories based on the upcoming Call of Duty: Black Ops III game release.This new partnership not only means new gear but also makes Astro the official audio gaming headset for Black Ops III.

ASTRO Gaming is already well-known as the preferred gaming headset brand for numerous competitive Call of Duty teams, including Team EnVyUs and 2-time X-Games Gold Medalists OpTic Gaming. In addition, ASTRO’s A40 headset and MixAmp Pro were featured at the Call of Duty® Championship earlier this year.

Fans won't have to wait long to see what ASTRO has in store as they will be unveiling the new headsets and accessories at PAX Prime next week.

ASTRO Gaming is already well-known as the preferred gaming headset brand for numerous competitive Call of Duty teams, including Team EnVyUs and 2-time X-Games Gold Medalists OpTic Gaming. In addition, ASTRO’s A40 headset and MixAmp Pro were featured at the Call of Duty® Championship earlier this year.

“As we prepare to unveil a new evolution in ASTRO Gaming professional audio equipment, we’re honored to be working with Call of Duty, the leading console eSports franchise worldwide, and of course one of the biggest gaming entertainment properties in history.” said Aron Drayer, VP of Marketing, ASTRO Gaming.  “eSports has grown dramatically over the last 5 years, and with it the needs of the athletes has also evolved. Our new products will redefine expectations of what Pro really means. We will be working closely to spread the message about our new products to all consumers, while simultaneously helping to grow awareness of the eSports lifestyle overall, including competing, spectating and streaming.”

About Call of Duty: Black Ops III
Call of Duty: Black Ops III is set in the year 2065, where bio augmentation and cybernetic enhancements have given rise to a new breed of Black Ops soldiers. Through Direct Neural Interface (DNI) technology, players are now connected to the intelligence grid and their fellow operatives during battle. This elite squad consists of men and women who have enhanced their combat capabilities to fight faster, stronger, and smarter. Black Ops III also offers the deepest, most rewarding multiplayer ever offered in Call of Duty®, featuring a brand new chain-based fluid movement system, Specialist characters with unique weapons and abilities, Gunsmith weapon customization tools and, in the PlayStation® 4, Xbox One and PC versions of the title, a range of new eSports capabilities.  In addition, Treyarch's signature Zombies mode makes its return with “Shadows of Evil,” an on-disc experience set in a 1940s film noir-inspired era that follows four unwitting characters that must work together to stay alive while a mysterious, shadowy figure offers them a path to redemption.
Call of Duty: Black Ops III, slated for release on November 6, 2015, is in development for the PlayStation® 4, Xbox One, PC, PlayStation® 3 and Xbox 360.  The title is not yet rated. For more information, visit: www.callofduty.com, www.youtube.com/callofduty.

About Skullcandy, Inc.
Skullcandy, Inc. (NASDAQ: SKUL), is the original lifestyle and performance audio brand inspired by the creativity and irreverence of youth culture. Skullcandy designs, markets and distributes audio and gaming headphones, earbuds, speakers and other accessories under the Skullcandy, Astro Gaming and 2XL brands. The Company launched in 2003 and quickly became an international audio brand by bringing innovation, bold color, character and performance to an otherwise monochromatic audio space. The Company's products are sold and distributed through a variety of channels in the U.S. and approximately 80 countries worldwide, including the Company's website at www.skullcandy.com.

# # #
ACTIVISION, CALL OF DUTY and CALL OF DUTY BLACK OPS are trademarks of Activision Publishing, Inc. All other trademarks and trade names are the properties of their respective owners.
[/toggle] [/toggles]