Check Out The Trailers & TV Spots From Super Bowl XLIX 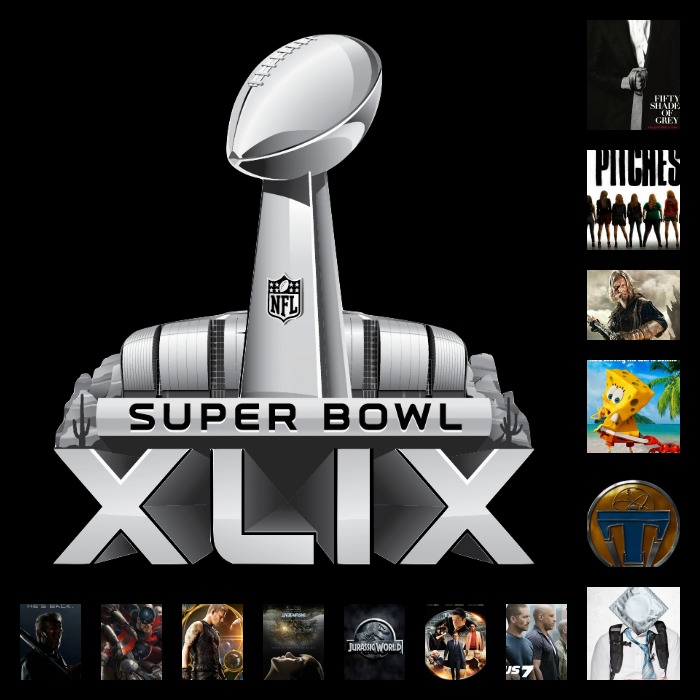 While many of us tuned in to see if the Patriots would win another title or if the Seahawks would earn the honor of back to back Super Bowl victories others tuned in to see the tv spots and trailers for their favorite films. I was really hoping to see a Batman v. Superman: Dawn of Justice trailer but sadly I did not get my wish. Here are the trailers and spots from Super Bowl XLIX:

I never understood the what the big deal was about this film other than the soundtrack ending up on the radio but clearly Hollywood sees $$$ with the cast and the songs. We'll see if the film repeats the success of its prior installment.

Highest advance ticket sales for an R-rated film is the first of many records I am sure the film adaptation of E.L James best-selling series will break.

The Spongebob Movie: Sponge Out of Water

Super Bowl TV Spot for The Spongebob Movie: Sponge Out Of Water on TrailerAddict.

I feel that the boat has sailed with regards to Spongebob. While the show is considered a pop culture phenomenon the popularity is not what it once was. It will be interesting to see if this film not only does well but makes Spongebob relevant again.

I want to like this film, but the trailer remind me of gems like Dungeons & Dragons and Eragon and not in a good way either.

Hey, It's Vince Vaughn playing the same role he always plays. While I am sure Dave Franco will try his hardest to make this film work I feel that any other comedian  would have been a better choice than Vince Vaughn.

Disney continues to crank out box office winners and while Tomorrowland seems a bit “heavier” then most Disney features I'll admit that the cast, story, and special effects have this film on radar.

Over the top action sequences? Check!

The Rock killing it as Hobbs? Check!

We'll see how much the passing of Paul Walker truly affected the film when it hits theaters in April.

Did Ted need a sequel? Not at all but I'll admit the first film had its share of funny moments. They were smart to use the Tom Brady scene for the Super Bowl spot and I am sure it will be discussed quite a bit on Monday morning.

Everything about Jurassic World screams summer blockbuster, but Chris Pratt training velociraptors will either be cool to see or remarkably cheesy.

Another comic brought to the big screen courtesy of Matthew Vaughn. I am looking forward to seeing this film since all I've heard over the last few weeks are good things.

Another young adult series that is printing money for Hollywood. The first film was not my thing, but the box office totals don't lie and neither do the presales.

Sci-Fi fans are chomping at the bit to see if the Wachowski siblings deliver another gem on par with The Matrix. I know Slick is looking forward to seeing this film.

May can't get here quick enough!