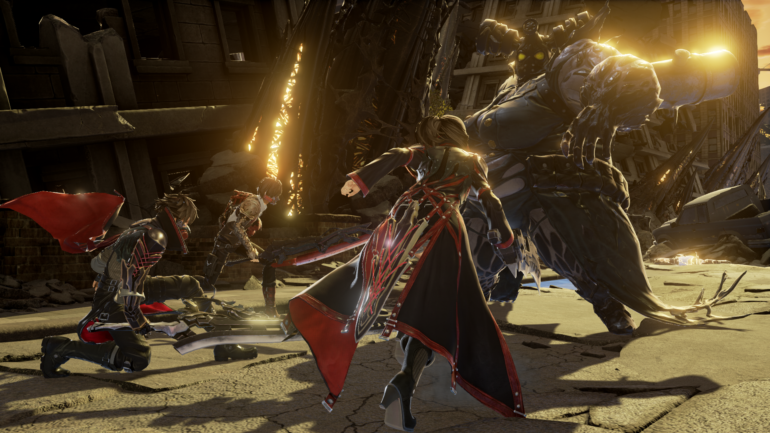 Code Vein gives players the chance to answer requests for help from other Revenants finding difficulty battling against the Lost. Explore and defeat the enemies lurking through each dungeon with your A.I. companion and another human player to get through difficult areas of the game. Players can communicate through a combination of gestures, stamps and voice commands for added communication and teamwork.

Two new characters have been announced for CODE VEIN; Karen and Cruz. Karen is the older sister of Louis who passed away but was revived as a Revenant. Her job is to take care of and support Revenants in battle. Cruz has withstood horrific experiments in an attempt to save mankind. However, under the intense pressure of an unsuccessful experiment, she became a destructive force within the world of Code Vein.

The Story of Code Vein

In the not too distant future, a mysterious disaster has brought collapse to the world as we know it. Towering skyscrapers, once symbols of prosperity, are now lifeless graves of humanity’s past pierced by the Thorns of Judgment. At the center of the destruction lies a hidden society of Revenants called Vein. This final stronghold is where the remaining few fight to survive, blessed with Gifts of power in exchange for their memories and a thirst for blood. Give into the bloodlust fully and risk becoming one of the Lost, fiendish ghouls devoid of any remaining humanity. Wandering aimlessly in search of blood, the Lost will stop at nothing to satisfy their hunger. Team up and embark on a journey to the ends of hell to unlock your past and escape your living nightmare in Code Vein.