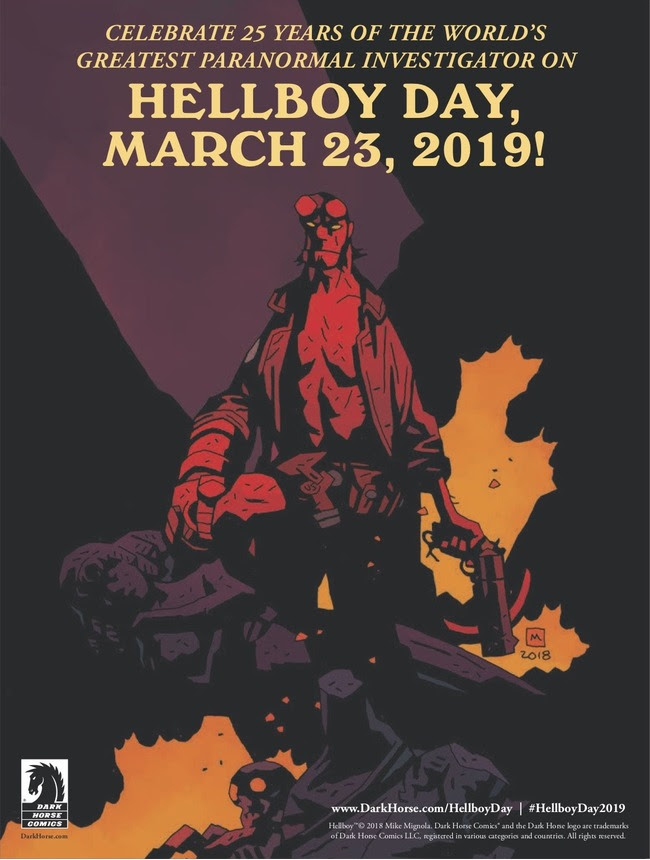 Comic book fans have a lot of days to celebrate including Free Comic Book Day, Batman Day, Local Comic Shop Day and various others but the comic fan calendar is going to get a bit more crowded as Dark Horse names March 23, 2019, Hellboy Day.

The publisher will be celebrating the 25th anniversary of the B.P.R.D.'s greatest investigator. Fans of the character can expect lots of events from their local shops commemorating this awesome milestone. If you're in Los Angeles you'll be able to meet Mike Mignola at Earth 2 Comics on March 23rd.

We'll next see Hellboy back on the big screen the following month with the new film from Neil Marshall hitting theaters on April 12, 2019. David Harbour will be playing Hellboy in this film.

MILWAUKIE, Ore., (November 15, 2018)—Next year, on Saturday March 23, 2019, Dark Horse Comics will celebrate the 25th anniversary of legendary comic book creator Mike Mignola’s most famous creation with Hellboy Day. In 1994, Dark Horse Comics published the debut issue of Hellboy: Seed of Destruction and introduced comic book readers to the Right Hand of Doom, the Bureau for Paranormal Research and Defense, and one of the most iconic comic book characters—and universes—of all time. For 2019’s Hellboy Day celebration, Dark Horse will publish a 25th anniversary, promotional edition of Hellboy: Seed of Destruction issue 1, featuring a new cover by Mignola and colorist Dave Stewart, which will be given away at participating comic book shops; and select stores across the country will host Hellboy Day events.

“When I created Hellboy way back when I never imagined he would be around long enough to celebrate a 25th anniversary,” said Mike Mignola. “I’m grateful to the writers, artists, colorists, and letterers who’ve joined me in telling Hellboy stories for all these years. And, of course, so grateful to the fans. This thing could not exist without their support and it’s a pleasure every time I get to go out to meet them.” Mike Mignola will appear at a Hellboy Day signing at Earth 2 Comics in Sherman Oaks in Los Angeles on March 23.

Dark Horse is inviting comic book retailers to celebrate this milestone anniversary for the world’s greatest paranormal investigator by holding store events and sales of Hellboy titles. In addition, Dark Horse will be creating a series of Hellboy Day promotional materials for retailers, including a Hellboy Tattoo Sheet, a Right Hand of Doom bookmark, a window cling, an open/close sign, and a new, folded version of the Hellboy double-sided poster and Mignolaverse timeline that debuted at New York Comic Con. Retailers will have the chance to order promotional, giveaway materials and are invited to take advance of additional backlist sale pricing in order to hold celebrations at their stores. Qualifying retailers who take advantage of backlist sales promotion will be automatically entered to win special prizing packages from Dark Horse.

“Hellboy fans: please make sure to tell your retailer you want your local store to participate in this awesome celebration today,” said Matt Parkinson, Dark Horse Vice President of Marketing. “And retailers: look for the December Previews for February on Sale (Issue #363) for details on backlist sales and contest deals, as well as ordering information on the promotional material being created for the event.”

For nearly 25 years, Mignola and a host of celebrated writers and artists have chronicled the adventures of Hellboy facing his supposed destiny as Beast of the Apocalypse and explored the mysterious backstories of B.P.R.D. agents including Professor Trevor Bruttenholm and Abe Sapien. Hellboy’s adventures have appeared in what are known as the Mignolaverse — the strange shared universe of comic books and graphic novels, comprised of acclaimed titles including Hellboy & the B.P.R.D., Abe Sapien, B.P.R.D., Crimson Lotus, Frankenstein Underground, Lobster Johnson, The Visitor: How and Why He Stayed and Witchfinder. Hellboy has appeared in graphic novels and comic books, prose novels and short story collections, two animated features, two live-action films, toy lines and all manner of merchandise. Neil Marshall’s forthcoming Hellboy film starring David Harbour, Sasha Lane, Ian McShane, Penelope Mitchell, and Milla Jovovich will be released by Lionsgate on April 12, 2019.

For more information about the Mignolaverse comic books and graphic novels, as well as announcements of Dark Horse Comics’ plans for 2019 to celebrate the 25 year anniversary of the first Hellboy comic book, Hellboy: Seed of Destruction, follow the company on Twitter, Facebook and Instagram.

About Mike Mignola:
Mike Mignola’s fascination with ghosts and monsters began at an early age; reading Dracula at age twelve introduced him to Victorian literature and folklore, from which he has never recovered. Starting in 1982 as a bad inker for Marvel Comics, he evolved into a not-so-bad artist. By the late 1980s, he’d begun to develop his unique graphic style, with mainstream projects like Cosmic Odyssey and Batman: Gotham by Gaslight. In 1994, he published the first of many Hellboy series through Dark Horse, leading to many spinoffs, prose books, animated films, and two live-action films. Along the way he worked on Francis Ford Coppola’s film Bram Stoker’s Dracula (1992), Disney’s Atlantis: The Lost Empire (2001), and with director Guillermo del Toro on Blade II (2002), Hellboy (2004), and Hellboy II: The Golden Army (2008). A new Hellboy film by Neil Marshall is currently in the works. Mike’s books have earned numerous awards and are published in a great many countries. He lives in Southern California with his wife, daughter, and cat.
About Dark Horse
For more than thirty years, Dark Horse Comics has proven to be a solid example of how integrity and innovation can help broaden a unique storytelling medium and establish a small, homegrown company as an industry giant. Founded in 1986 by Mike Richardson, the company is known for the progressive and creator-friendly atmosphere it provides for writers and artists. In addition to publishing comics from top talent, such as Eric Powell, Mike Mignola, Geof Darrow, Brian Wood, Gail Simone, Stan Sakai, and Guillermo del Toro, and comics legends, such as Will Eisner, Milo Manara, Kazuo Koike, Neil Gaiman, and Frank Miller, Dark Horse has developed its own successful properties, such as The Mask, Ghost, X, and Barb Wire. Its successful line of comics, manga, and products based on popular properties includes Dragon Age, Buffy the Vampire Slayer, Aliens, Conan, Tomb Raider, The Legend of Zelda, Halo, The Witcher, Game of Thrones, and Avatar: The Last Airbender. Today, Dark Horse Comics is the largest independent comic book publisher in the US and is recognized as one of the world’s leading entertainment publishers.