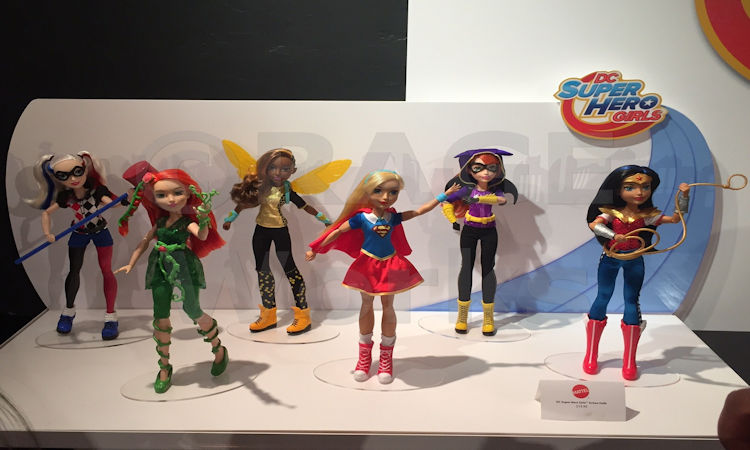 This past weekend at Toy Fair, we were introduced to Mattel’s new DC Super Hero Girls dolls and figures, and girl, were they super!

Currently, a YouTube animated short series (which premiered in October 2015), the DC Super Hero Girls follows young heroines Supergirl, Wonder Woman, Batgirl, Harley Quinn, Poison Ivy, Katana and Bumblebee as they attend classes at Super Hero High School with other heroes. The characters deal with their superpowers coupled with the regular antics of growing up.

The comic book genre has been considered “only for boys” for far too long, and with more and more girls interested in these characters (whether or not being due to blockbuster big-screen movies), it was high time that merchandise was made for our daughters, sisters and nieces to join the adventures with the boys!

Now, we will have just that. DC Entertainment and Warner Bros. Consumer Products are gearing up to roll out the newest offerings for the DC Super Hero Girls franchise. Aimed at 6 to 12-year-old girls, the dolls and merchandise from Mattel will include 12-inch dolls, 6-inch action figures (a first for girls), books, role-play apparel and accessories. These items will be sold exclusively at Target starting next month, with a worldwide release in July. Also in March, the companies will release a DC Super Hero Girls app, offering access to videos and online games. So, all the little ladies in your life can join together and save the day!

We were treated to a sneak peek at the 12-inch dolls and 6-inch action figures at Toy Fair, and I myself loved them. The characters are all in heroic poses, ready to use their powers to save the day! Personally, it is nice to see dolls other than Barbie and the Disney Princesses on the market. Not that there is anything wrong with those properties, because there isn’t. I just like the fact that DC and Mattel are bringing to life a vast world of other characters that can teach girls to be strong and powerful. I can’t wait to pick up these dolls for the little gals in my life.  As the slogan says, “Get Your Cape On”!