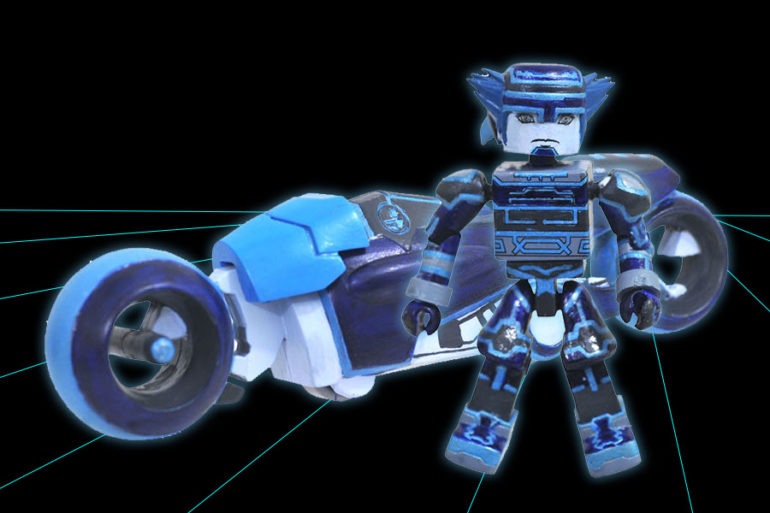 Gamers are counting down for the release of the highly anticipated
Kingdom Hearts 3 and our friends at Diamond Select have a ton of great collectibles on the horizon for Kingdom Hearts fans including actions figures, dioramas, vinyl figures, and Minimates. Check out the press release from Diamond below as well as images of all the upcoming collectibles heading way.

On the eve of the launch of Kingdom Hearts III, the long-awaited video game sequel, DST has a plethora of new Kingdom Hearts products in the works based on the entire franchise! From action figures to vinyl figures to resin busts, there’s something for every kind of collector hitting stores between now and this summer!

In comic shops and specialty stores now, the second series of Kingdom Hearts Select action figures features the world of Space Paranoids, pairing Sora with Sark, Goofy with Tron, and Organization 13 Mickey with an Assassin Heartless! Look for Sora, Goofy and an exclusive Timeless Pete at Walgreens, and Sora, Tron with an exclusive Soldier Heartless, and an exclusive unhooded Mickey with Assassin at GameStop.

Also at GameStop, four exclusive Kingdom Hearts Gallery PVC Dioramas are now available, spotlighting Sora, Goofy, Pete and Mickey with Donald. Ranging from 6 to 9 inches tall, each sculpture is made of high-quality plastic, and features high-quality paint details. They can also be ordered on GameStop.com.

In comic shops and specialty stores, the Kingdom Hearts 3 Vinimates vinyl figures are based on the game’s new Toy Story looks. Featuring Sora, Donald, and Goofy, each 4-inch block-styled figure has an articulated neck for additional posing options.

Coming this spring, the first Kingdom Hearts III Select action figures will be Sora in his new look and the sorceress Maleficent! Packaged in a 2-pack, each 7-inch scale figure features up to 16 points of articulation and includes an accessory – Sora with his Shooting Star Keyblade, and Maleficent with her staff and raven Diablo. Sora’s compatriots Goofy and Donald will also get a re-release in their own two-pack, with shield and scepter accessories, respectively.

Also in the spring, The Legends in 3D line of half-scale resin busts brings to life Sora as he appears in the new game! Measuring approximately 10 inches tall, Sora is limited to only 1,000 pieces and comes packaged in a hand-numbered, full-color box with a certificate of authenticity. It was designed by Joe Allard, sculpted by Varner Studios!

Then in the summer, Kingdom Hearts Minimates Series 3 visits the worlds of Kingdom Hearts 3! Three two-packs make up the assortment, featuring Toy Story Sora with Wreck it Ralph, Pirates of the Caribbean’s Captain Jack Sparrow with Pirate Donald, and Mickey Mouse with Maleficent! Each 2-inch mini-figure features fully interchangeable parts and accessories.

Pick up or pre-order from your local comic shop or favorite online retailer, or visit shop.diamondselecttoys.com/kingdom-hearts!