Evolve Gets The Behemoth & New Hunters With The Latest DLC Pack 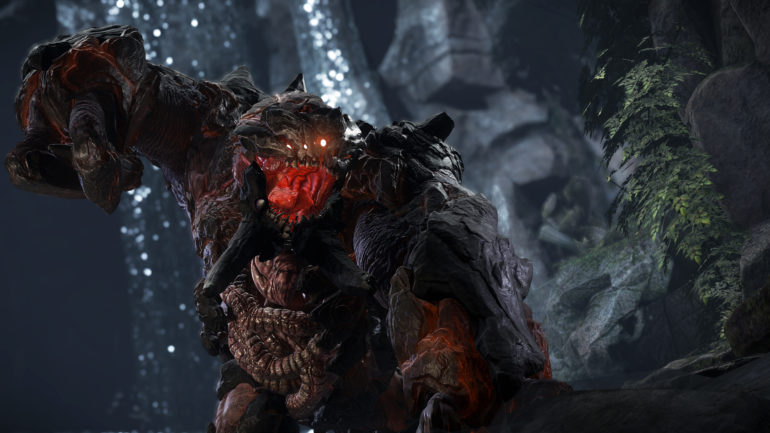 Dust off those copies of Evolve ladies and gents as a new DLC pack heads your way and it brings not only a new monster but four new hunters as well. Observer mode also arrives in this update with tools to add commentary to your matches. Here is a full breakdown of the new arrivals in this new DLC:

Join the conversation on Twitter using the hashtag #4v1

New York, NY – March 31, 2015 – 2K and Turtle Rock Studios announced that the Evolve™ experience is expanding today with the launch of a host of downloadable content* including the fourth playable Monster, Behemoth, four new playable Hunters, a free Observer Mode, and more. Those who own Evolve but do not purchase Behemoth or the four new Hunters can still play against or alongside these new characters online and against them offline, adding depth and replayability for the entire Evolve community without dividing players based on what additional content they own. Additionally, a free Observer Mode means more new content for all Evolve players to enjoy.

Evolve’s new Monster and Hunters are unique in appearance and abilities. Behemoth is a tank of a Monster that becomes a giant, destructive boulder and rolls through the environment for quick traversal. Behemoth is free for those who pre-orderedEvolve from participating retailers as part of the Monster Expansion Pack, and is available separately for $14.99. For complete details on Behemoth, visit: https://evolvegame.com/news/evolve-fourth-monster-behemoth.

Four new Hunters also join the Evolve lineup: Torvald, a cyborg Assault character with a mortar cannon for an arm; Crow, a Trapper with a pet Batray for tracking Monsters; Slim, a genetically modified combat Medic; and Sunny, a Support character equipped with a mini nuke grenade launcher. Each new Hunter expands the Evolve experience with new weapons, equipment, and abilities. The four Hunters are available as part of the Evolve Hunting Season Pass along with three Monster skins** for $24.99. Each Hunter can also be purchased separately for $7.49. For complete details on these four new Hunters, visit:https://evolvegame.com/news/introducing-evolves-next-four-hunters.

Observer Mode is a free feature designed to provide the Evolve community with the tools to observe and add commentary toEvolve. Observer Mode allows a sixth user to passively enter a custom game in Evolve, enhancing any live streaming by seamlessly switching to view any of the five players. Observer Mode includes an informative HUD that updates in real time throughout the match, showcasing player health, survival odds, perks, the mini-map, and more. For complete details on Observer Mode, visit: https://evolvegame.com/news/observer-mode-coming-soon-to-evolve.

Additionally, two free maps are available today exclusively, first on Xbox One, the all-in-one games and entertainment system from Microsoft, and will be available for Windows PC and PlayStation®4 computer entertainment system on April 30, 2015. The Broken Hill Mine and Broken Hill Foundry maps introduce two distinct environments and bring additional depth and replayability to the entire Evolve community free of charge. For complete details on these new maps, visit:https://evolvegame.com/news/two-new-free-maps-coming-to-evolve.

Evolve is now available worldwide for Xbox One, PlayStation®4 system, and Windows PC. Evolve is rated M for Mature by the ESRB. For more information on Evolve, follow us on Twitter, become a fan on Facebook, subscribe on YouTube and visit https://www.Evolvegame.com.

From Turtle Rock Studios, creators of Left 4 Dead, Evolve is a shooter in which four Hunters face off against a single, player-controlled Monster in adrenaline-pumping 4v1 matches. Play as the Monster to use savage abilities and an animalistic sense to kill your human enemies, or choose one of four Hunter classes (Trapper, Support, Assault and Medic) and team up to take down the beast on the planet Shear, where flora and fauna act as an adversary to Hunter and Monster alike. Level up to unlock new Hunter or Monster characters as well as upgrades, skins, and perks. Earn your infamy on the leaderboards and become the apex predator.

Headquartered in New York City, Take-Two Interactive Software, Inc. is a leading developer, publisher and marketer of interactive entertainment for consumers around the globe.  The Company develops and publishes products through its two wholly-owned labels Rockstar Games and 2K.  Our products are designed for console systems and personal computers, including smartphones and tablets, and are delivered through physical retail, digital download, online platforms and cloud streaming services.  The Company’s common stock is publicly traded on NASDAQ under the symbol TTWO. For more corporate and product information please visit our website at https://www.take2games.com.

“PlayStation” is a registered trademark. “PS4” and “PSN” are trademarks of Sony Computer Entertainment Inc.

All trademarks and copyrights contained herein are the property of their respective holders.

Cautionary Note Regarding Forward-Looking Statements
The statements contained herein which are not historical facts are considered forward-looking statements under federal securities laws and may be identified by words such as “anticipates,” “believes,” “estimates,” “expects,” “intends,” “plans,” “potential,” “predicts,” “projects,” “seeks,” “will,” or words of similar meaning and include, but are not limited to, statements regarding the outlook for the Company's future business and financial performance. Such forward-looking statements are based on the current beliefs of our management as well as assumptions made by and information currently available to them, which are subject to inherent uncertainties, risks and changes in circumstances that are difficult to predict. Actual outcomes and results may vary materially from these forward-looking statements based on a variety of risks and uncertainties including: our dependence on key management and product development personnel, our dependence on our products and our ability to develop other hit titles for current and next-generation platforms, the timely release and significant market acceptance of our games, the ability to maintain acceptable pricing levels on our games, our ability to raise capital if needed and risks associated with international operations. Other important factors and information are contained in the Company's Annual Report on Form 10-K for the fiscal year ended March 31, 2014, including the risks summarized in the section entitled “Risk Factors,” the Company’s Quarterly Report on Form 10-Q for the fiscal quarter ended December 31, 2014, and the Company's other periodic filings with the SEC, which can be accessed at www.take2games.com. All forward-looking statements are qualified by these cautionary statements and apply only as of the date they are made. The Company undertakes no obligation to update any forward-looking statement, whether as a result of new information, future events or otherwise.[/toggle] [/toggles]