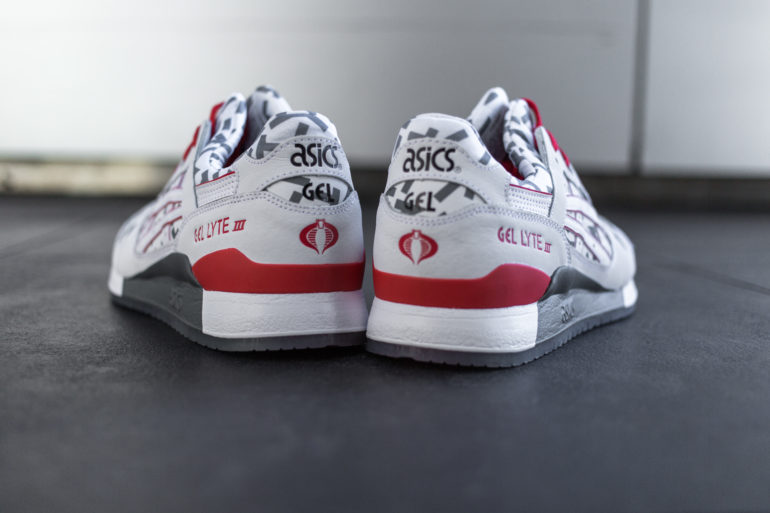 Our friends at Hasbro keep the hits coming this week after their stellar week at Toy Fair. The company announced today a new sneaker and apparel collaboration showcasing G.I. Joe's Snake Eyes and Storm Shadow. Fans of the Arashikage warriors will have their choice of two Gel Lyte III sneakers showcasing the iconic colors of G.I. Joe's silent ninja warrior and his Cobra counterpart. In addition to the sneakers which will be in stores today fans will also have some additional clothing to compliment the sneakers.

Check out the sneakers below and look for them at your local Footlocker, Footlocker.com and Footlocker Pop Up stores.

HASBRO AND ASICS TEAM UP FOR G.I. JOE SHOE LINE

The line is inspired by an epic chapter in the G.I. Joe lore: the rivalry between Storm Shadow and Snake Eyes.  Once brothers in arms as part of the Arashikage Clan, they find themselves on opposing sides of the struggle between G.I. Joe and Cobra. Now, Storm Shadow and Snake Eyes each adorn their own GEL-LYTE® III shoe designed by world-renowned pop artist Anderson Bluu. Uncompromising on style and comfort, the GEL-LYTE® III boasts an iconic and innovative design that wouldn’t be complete without the split tongue and ASICS’ famous GEL® technology cushioning; a silicone-like material that effectively absorbs shock and protects the feet from high-impact strikes.

“ASICS has a solid reputation of launching innovative designs to consumers across the globe and we are proud to bring G.I. Joe characters to life in an entirely original way,” said Casey Collins, General Manager and Senior Vice President of Entertainment and Licensing at Hasbro. “We know fans and collectors will appreciate the care and detail ASICS has taken in every aspect of the release from the shoe detailing to the packaging.”

“We were inspired by the story of Storm Shadow and Snake Eyes to create these shoes in collaboration with Hasbro,” said Lindsey Sweeney, Global GM Sportstyle Footwear, ASICS. “The characters represent a true Yin and Yang – a duality and symmetry that link their lives together – and we were excited to take that inspiration to our GEL-LYTE III® model.”

The ASICS x G.I. JOE shoes will be sold exclusively at FootLocker.com and select POP by Foot Locker doors because Knowing is Half the Battle.

G.I. JOE and all related characters are trademarks of Hasbro and are used with permission. © 2019 Hasbro. All Rights Reserved. Licensed by Hasbro.

Anima Sana In Corpore Sano, meaning “A Sound Mind in a Sound Body,” is an old Latin phrase from which ASICS is derived and the fundamental platform on which the brand still stands. The company was founded more than 60 years ago by Kihachiro Onitsuka and is now a leading designer and manufacturer of performance athletic footwear, apparel, and accessories. For more information, visit www.asics.com. Follow @ASICSamerica on Facebook, Twitter, Instagram, and YouTube for exclusive content and real-time news around ASICS products, events, and elite athletes.

Hasbro (NASDAQ: HAS) is a global play and entertainment company committed to Creating the World's Best Play Experiences. From toys and games to television, movies, digital gaming, and consumer products, Hasbro offers a variety of ways for audiences to experience its iconic brands, including NERF, MY LITTLE PONY, TRANSFORMERS, PLAY-DOH, MONOPOLY, BABY ALIVE and MAGIC: THE GATHERING, as well as premier partner brands. Through its entertainment labels, Allspark Pictures, and Allspark Animation, the Company is building its brands globally through great storytelling and content on all screens. Hasbro is committed to making the world a better place for children and their families through corporate social responsibility and philanthropy. Hasbro ranked No. 5 on the 2018 100 Best Corporate Citizens list by CR Magazine and has been named one of the World’s Most Ethical Companies® byEthisphere Institute for the past eight years. Learn more at www.hasbro.com, and follow us on Twitter (@Hasbro) and Instagram (@Hasbro).