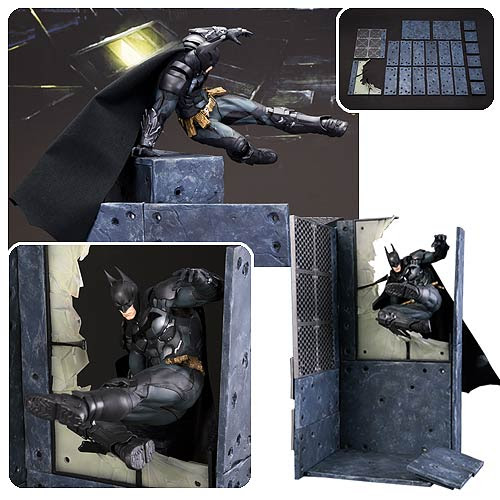 Batman: Arkham Knight has been lighting up the charts both for gaming and collectibles since its release in June. We've already seen our fair share of action figure tie-ins but now Kotobukiya is getting in on the action by releasing a line of ArtFX+ statues capturing key moments from the game that can also be combined to form a fight scene between Batman and The Arkham Knight . While the statues will not be available till 2016 we have a sneak peek courtesy of our friends at Entertainment Earth who is taking preorders for both statues now.

Display Batman breaking through a wall, vaulting over rubber, or in the middle of delivering a flying side kick. With multiple square and rectangular pieces plus a broken window, metal grate, and joint parts, this set is all about building your own diorama base.

You can craft your own unique display by combining Batman's architectural elements with those of his arch-rival the Arkham Knight (shown above) and show off the 2 fighting in a rich and complex Gotham City Environment! Lastly, as a special bonus every bullet hole in the walls of the diorama is approximately 4 mm in diameter so it can also display Frame Arms model kits or Modeling support goods (sold separately).