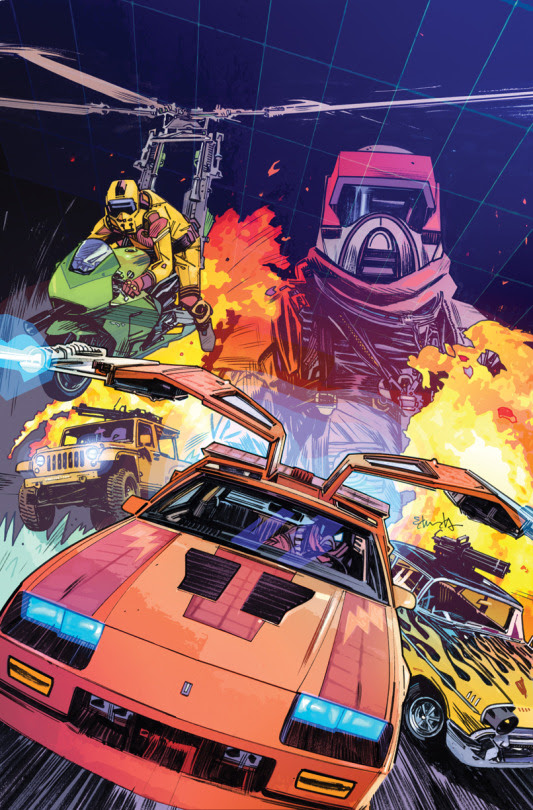 If you grew up in the 80's then M.A.S.K. is acronym you may have seen or heard while growing up. M.A.S.K. stands for Mobile Armored Strike Kommand and was both a cartoon and toyline the focused on the conflict between M.A.S.K led by Matt Trakker and V.E.N.O.M. (Vicious Evil Network of Mayhem) led by Miles Mayhem . The most memorable aspect of the series were its transforming vehicles and the masks worn by both the heroes and villains.  I personally always wanted Matt Trakker's Chevy Camaro which transformed into a jet.

Rumors have been circulating that we will be seeing M.A.S.K. debut on the big screen as part of the G.I. Joe universe in G.I. Joe 3. While we await official confirmation on that rumor fans can get reacquainted with the characters and the series courtesy of a new ongoing series being put out by IDW this fall. The creative team  for the M.A.S.K. ongoing series will be comprised of writer Brandon Easton (Marvel’s Agent Carter, Transformers: Deviations) and artist Tony Vargas (Rot & Ruin, TMNT: Shadows of the Past Board Game).

San Diego, CA (May 2, 2016) – Joining other recent Hasbro additions to the IDW Publishing slate, ROM, and Micronauts, M.A.S.K. will become the latest property to receive its own comic series.

The fans have spoken and so by popular demand, M.A.S.K. will hit comic shops later this year from the creative team of writer Brandon Easton (Marvel’s Agent Carter, Transformers: Deviations) and artist Tony Vargas (Rot & Ruin, TMNT: Shadows of the Past Board Game).

“We are so proud to be able to continue growing the impressive relationship between IDW Publishing and Hasbro with this new M.A.S.K. comic series,” said IDW Managing Editor David Hedgecock. “We can’t wait to bring the high-octane, unique, brand of storytelling to this book that we know fans of M.A.S.K. will expect!”

While being mindful and respectful of the source material, the main drive behind bringing this beloved property into the new century is to preserve the old school qualities fans loved growing up, while also consciously infusing it with slightly more modern sensibilities. This is where sophisticated stories meet cutting edge designs while not afraid to look in the rearview mirror and pay tribute to its origins. It is the editorial and creative team’s intention to focus attention on the multi-cultural heritage of the show, presenting a contemporary M.A.S.K. to fans in a unique, yet familiar, way.

“We’ve had tremendous success with IDW over the years in re-launching classic brands for a contemporary audience while still paying appropriate homage to their origins,” said Michael Kelly, Head of Global Publishing at Hasbro. “We are thrilled to welcome a new team to this library of heroes, as M.A.S.K. joins the ranks of JEM & THE HOLOGRAMS, MICRONAUTS, and THE TRANSFORMERS.”

M.A.S.K. launches this November as an ongoing series featuring cover art by the multi-talented Tommy Lee Edwards. To hold you over until then, this new era of Hasbro titles has already begun with Micronauts #1 on sale now and ROM #0 kicking off on Free Comic Book Day on May 7.

ABOUT HASBRO
Hasbro (NASDAQ: HAS) is a global company committed to Creating the World's Best Play Experiences, by leveraging its beloved brands, including LITTLEST PET SHOP, MAGIC: THE GATHERING, MONOPOLY, MY LITTLE PONY, NERF, PLAY-DOH and TRANSFORMERS, and premier partner brands. From toys and games, television programming, motion pictures, digital gaming and consumer product licensing, Hasbro fulfills the fundamental need for play and connection with children and families around the world. The Company's Hasbro Studios and its film label, ALLSPARK PICTURES, create entertainment brand-driven storytelling across mediums, including television, film, digital and more. Through the company's commitment to corporate social responsibility, including philanthropy, Hasbro is helping to build a safe and sustainable world and to positively impact the lives of millions of children and families. Learn more at www.hasbro.com, and follow us on Twitter (@Hasbro & @HasbroNews) and Instagram (@Hasbro).