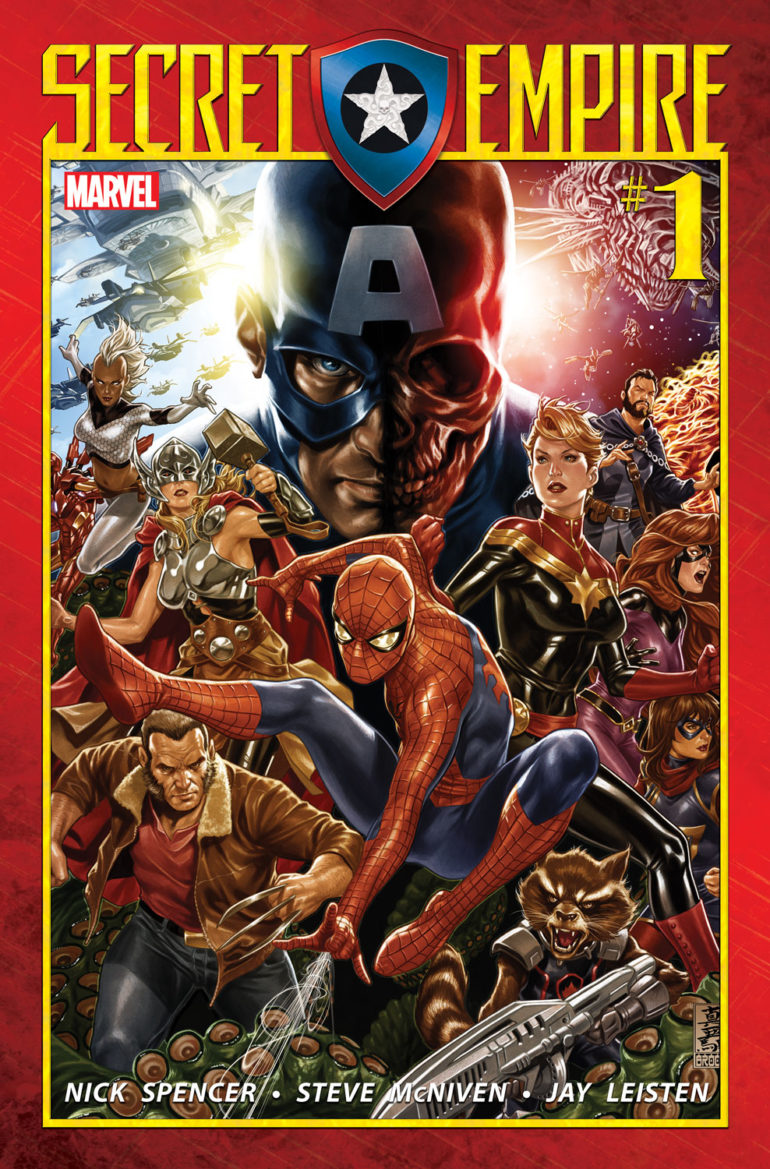 My Take: The reveal of Captain America being a Hydra sleeper agent has divided comic fans. No one can ignore how compelling the concept is and how the ramifications will change not only Cap's standing the Marvel Universe but his relationships with friends and foes alike. We are only a few weeks away from seeing if Marvel's controversial decision was worth the risk.

Check out the variant as well as a sneak peek at issue #1 below.

UNITED WE STAND – Your First Look at SECRET EMPIRE #1!

The Avengers, X-Men, Defenders, Inhumans, Champions, and More Galvanize as One

New York, NY—April 7th, 2017 — This is it, the moment you’ve been waiting for! It has been building for months, but now the time has come. The most trustworthy, stalwart hero the Marvel Universe has ever known will step into the light and reveal himself! How will the heroes of the Marvel Universe cope with such a shattering betrayal? It’s all happening on May 3rd, as the highly anticipated SECRET EMPIRE #1 makes it’s thunderous debut at your local comic shops and on digital devices everywhere! Today, Marvel is pleased to present your first eye-popping look inside issue #1!

From blockbuster creators, Nick Spencer & Steve McNiven comes a first issue that must be seen to be believed! The Marvel Universe is under siege from within. Due to the manipulations of the Red Skull, Captain America, secretly a true believer in the cause of Hydra, uses the trust and respect he has gained over the years to ascend to a position where he can enact Hydra’s ideals. But now, the dominos of his master plan will begin to fall! Ask yourself, what if your greatest ally was secretly your greatest enemy?

Now, the rise of Hydra stands as a rallying cry for the heroes across the Marvel Universe. Avengers, Champions, Guardians, Defenders, X-Men, Spider-Man, Deadpool and more must unite. Put aside their differences and come together as one. The first and last line of defense against Hydra!

The sensational can’t-miss SECRET EMPIRE #1 hits comic stores and digital devices May 3rd. Get in on the ground floor of the comic event of the year that’s sure to have the world talking! As Hydra’s grip tightens around the Marvel Universe, can the heroes stand triumphant? Find out this May!