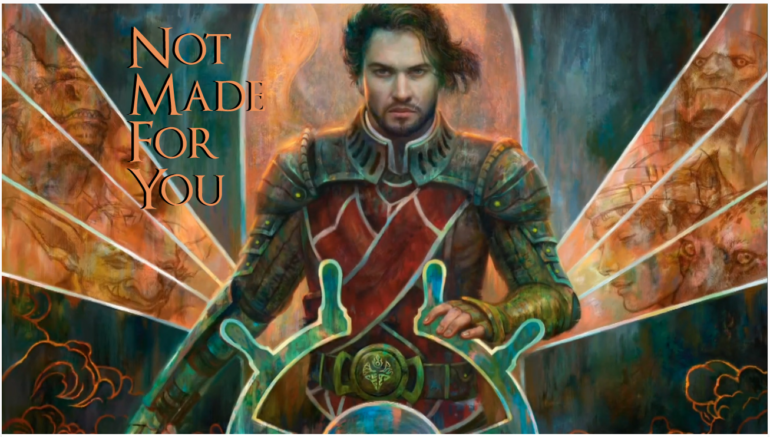 When I started Magic at the launch of Return to Ravnica, I had just started college. One day, my gang of friends and I were invited to play Magic: the Gathering for the first time, and my life hasn't been the same since. I remember cracking my first two mythics, Withengar Unbound and Jarad, Golgari Lichlord. They work great together, but are near unplayable in the 60-card standard format. After years of absence and not playing the game, it wasn't until 2017 where I learned about Commander and could make the combo more consistent.

Commander, the unintentionally most popular format of the quarter century year-old card game, has never been bigger. Thanks to a swarm of podcasts, Youtubers spoon-feeding good budget cards to players, and it's party game social setting, the game has become immensely popular in recent years. So when Wizards of the Coast prints a new product specifically for Commander, the internet becomes totally lost in their excitement. With Commander 2019 being revealed to be geared towards new commander players, it's smart to look back at the entire history of commander products to see how a more basic set was inevitable.

Commander – A History of Products

When I said Commander is unintentionally the most popular format, I meant that it didn't start out as an official Wizards-created format. It wasn't until 2011 that the company started releasing dedicated decks and legendary creatures for Commander. Before then, you had to make due with whatever cards Wizards decided to make legendary. The problem lies with most legendary creatures being near unplayable. I'm looking at you Gerrard Capashen.

Commander 2011 can be seen as the birth of the game as we know it today. It also helps that the next set released in Magic Innistrad is often hailed as the greatest set ever released in the game's 25 plus-year history. Looking at the most famous Commander from 2011 gives you a taste of the power this set of products brought to the kitchen table: Kaalia of the Vast.

There is a reason that she's seen as the commander boogeyman almost ten years later. It's also why she's often destroyed the moment she hits the field. But what if she doesn't die? What if she does use her ability against a brand new player during their first-ever game of Commander? I'd personally never play again and go back to Yu-gi-oh. Kaalia of the Vast, and by the extent, the rest of the Commander 2011 legends, weren't exactly beginner-friendly. Zedruu the Greathearted is obtuse to the point where most new Commander players wouldn't know how to use him properly, while Riku of Two Reflections uses the stack which no one knows how to operate. This was a Commander set for Commander players who have been playing for a long time, and Wizards took note of their dedication. Meanwhile, new Commander players look at Nin, the Pain Artist and see a bad card.

Skipping a year (due to the overwhelming demand of Commander 2011) came two cards I hate with a passion. Derevi, Empyrial Tactician and  Oloro, Ageless Ascetic introduced us to a mechanic that didn't have a name yet, but would in Commander 2017 – Eminence. Eminence is an ability that works out of the Command Zone, the place where your commander lies before you summon it. The problem is, eminence can't be stopped, it just happens and other players can't really respond to it. Derevi's eminence lets him skip the command tax while Oloro lets you gain you two life at the beginning of your turn. The problem with these cards is that they employ a very similar style of deck, in which the player/pilot invokes the essence of Oloro, and just sits back and does nothing. Once again, for a new player, this is the worst way to play Magic. When you're ready for an action-packed night of Commander and your opponent plays a deck which forces all other players to sit on their hands for two hours, your excitement for playing anymore becomes non-existent.

Now we are getting somewhere in terms of design. Planeswalkers are popular with new Commander players and Wizards took note and printed mono-colored planeswalkers that were allowed to be Commanders. I find this set to be a “best of both worlds” scenario for Commander products. The color restriction keeps the planeswalker commanders from becoming overpowered while also making it easy for new commander players to not have to worry about mana fixing. Minimalism and simplicity are important to capturing new commander players and is the reason Krenko Mob Boss is one of the most popular commanders of all time, especially for beginners. Enfranchised players who were looking for commanders that were more complex were treated to format all-stars like Ghoulcaller Gisa and Feldon of the Third Path. These are legendary creatures who inspire decks that specifically cater to their ability, but don't look that exciting to a new player.

It was a whole new experience for players in 2015, as it introduced us to something brand new. The commanders this year would give the player an experience counter. A counter that would allow your commander to do something special based on the number of experience counters you had. Experience is an interesting mechanic that hasn't been used since, and I believe it's because it's another example of a mechanic that's lacking interactivity. Normally, when a creature with counters on it dies, their counters vanish. However, unless you kill the player or play a spell to remove all counters, the player isn't losing the counters. Let's be realistic, you can only have 99 cards in your deck, we all know you aren't wasting a slot to remove counters on the off chance someone is playing an experience counters matter commander. However, I find the mechanic interesting enough to appeal to both casual and hardcore players, with commanders that are both flavorful, and deep, yet straightforward. Except for Meren of Clan Nel Toth, #BanMeren2k19.

I consider this period of time to be the Commander Silver Age. The power level yet simplicity of the face cards is off the charts and really leans into the multiplayer ideology of the game. Atraxa, Praetors' Voice, in my findings, is the perfect commander. A new player sees and is immediately attracted. Its eldritch art style invokes a sense of fantastic dread while the keyword soup makes the pilot feel powerful. Being able to give your creatures with counters, your planeswalkers with loyalty counters, or even yourself with experience counters, even more of those counters for free, feels good. You can take her in so many directions and shes one of the best for that reason. The other commanders are no slouches either. Kynaios and Tiro of Meletis and Saskia the Unyielding get the whole table involved while Yidris, Maelstrom Wielder is pure madness. Commander 2016 had a little something for everyone and is arguably the best commander set released.

Vampires, dragons, wizards, and cats, all the classic fantasy tropes that make up a successful Dungeons and Dragons campaign. This stretched the eminence mechanic to ban-worthy proportions.  Edgar Markov is banned in one-on-one Commander, but in multiplayer, he's a tribal powerhouse. This is the deck you give to your significant other who has never played Magic before. Sure, all the vampires die to a board wipe, but the feeling of steamrolling everyone over with a swarm of bloodsuckers gives you a power trip whether you admit it or not. New commander players will also immediately be attracted to The Ur-Dragon, because of dragons. The only problem with eminence is that it makes you an immediate target. Like players who pilot Meren yet cry about being targeted, people are afraid of that which they can not control. You can't counter Edgar creating as a swarm of vampires just like it's really hard to counter Meren's graveyard shenanigans. Besides that, sticking to classic fantasy tropes was definitely a flavor and marketing win here for Wizards.

Planeswalkers return and feel uninspired. Commander 2018 feels like Wizards cracked to the vocal minority and released more planeswalkers as commanders despite a majority of the player base being against their inclusion. The reason for the dislike comes from the card types' relative newness in Magic as a whole. There is nearly a decade of cards that don't mention planeswalkers, but specifically mention creatures. Opening Pandora's Box and allowing all of them legal commanders would make many decks obsolete. These planeswalkers are nothing to write home about, and with an increase in price with less valuable cards in the product, this set left a salty taste in the saltiest of mouths. Saheeli rocks, however.

Here we are, back to Commander 2019 and it's clear this is the most casual set to date. With fan-favorite mechanics such as Flashback and Madness, a barely explored mechanic in Populate, as well as Morph for some reason, this set had the potential for Commander veterans. Then the signature cards were previewed. With extremely simple abilities and art reminiscent of planeswalker preconstructed decks with the commander large and in center frame, there's no doubt this set was made for beginners in mind.

While the MTG finance subreddit will be upset that they can't hoard these for years to sell at a premium, this is the best thing that could happen to the format. Wizards isn't stupid. Hasbro is a billion-dollar company and does years of marketing research to see what sells. These commanders aren't for you, or me, or people who have been playing for years. We needed the Commander sets in years past to give us new playable legendary creatures. Now, new viable commanders are released every few months in booster packs. Commander 2019 is for the players who play arena and want to get into cardboard crack. While the cards are mechanically boring to someone like me, I don't speak for the millions of arena players who play casually and haven't spent a dime on microtransactions.

Don't be a Cynic

Before judging these cards, I think back to that Saturday in fall of 2012. I'd use my weekly allowance not to buy food or beer, but to buy Magic cards at Target. My two friends and I would sit in the Starbucks cracking packs and would get excited over uncommon cards. I think back to a more simple time when I didn't know the stack. I think back to before net-decking before I even knew you could buy cards online and when I ran six guttersnipes in one deck. I think back to when I wasn't cynical about the “power creep”. I think back to Withengar and Jarad, my two favorite cards in all of Magic and how they did eventually become the core of my first ever Commander deck. I think about all the new commander players who feel the same way I did back then. I know they will like this new product, and I love that more people are playing the best game in the world and get to experience Gerrard Capashen finally get a good card.