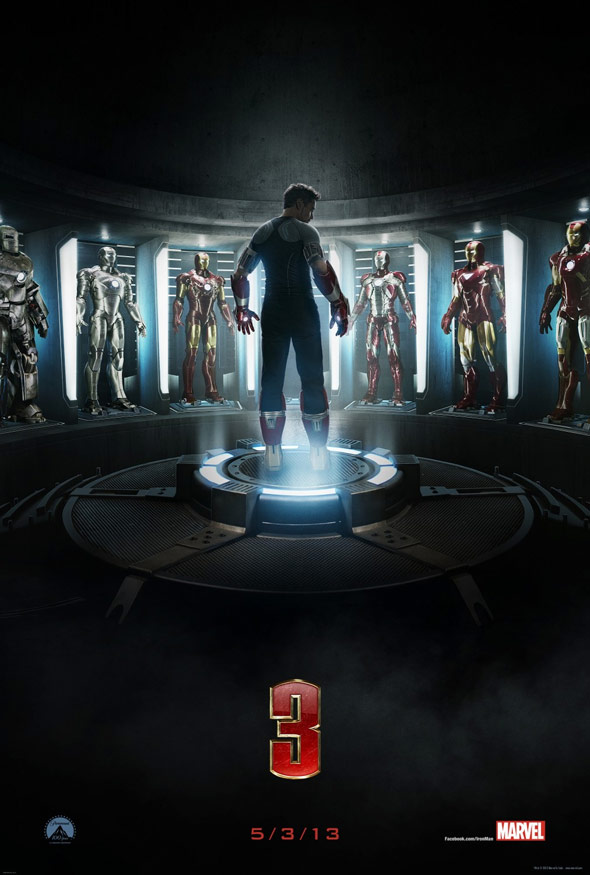 Following the events in The Avengers it seems Tony Stark did not come away completely unscathed, but there is no rest for the weary as The Mandarin makes his presence felt in ways that will not only change the way Tony approaches heroism but force him to go back to basics to protect those closest to him.  The end result will leave Stark forever changed.

There are quite a few that’s for sure!

Of course we can’t forget Mr. Stark’s many suits.

When I look back on the Iron Man trilogy, I view it as the first film being the test run, the second being an Avengers prequel and the third being the end of Stark’s story until after the Avengers.  As soon as the first scene rolled it was glaringly obvious that Jon Favreau’s vision of Iron Man was his alone and not that of Marvel as a whole. Shane Black’s work with Downey in Kiss, Kiss Bang, Bang was underlying from start to finish and made audiences connect and react to Stark differently. In previous films, Stark was a snarky douche, albeit in a more comedic way while in this latest incarnation his vitriol knew no limits and added to his eccentric nature, sometimes bordering on asshole and less snark. If you have seen Black’s work in The Last Boy Scout or Long Kiss Goodnight, the level of character attributes Stark exhibits are in line with some of the leads in those films. I will say that viewers were given notice to expect a more Stark-centric story and less “guys in suits fighting each other” and to some degree that was not a bad thing. It was refreshing to see Stark vulnerable and dependent on others as it brought the character full circle. Don Cheadle really impressed me in this film and you can see the chemistry with RDJ finally come together in the way readers see it in the books. Now don’t think Iron Man 3 was flawless because it definitely was not and there are some things I will say next that are delving into spoiler territory so be warned. My main issue was with The Mandarin, whom we all know as Stark’s main nemesis and the one audiences were most looking forward to seeing. When I found out that Sir Ben Kingsley was playing him I looked forward to it because Kingsley is a classically trained actor whose talent enhances any character. While most complained that Kingsley wasn’t the typical Fu-Manchu Mandarin, the fact remains that the need to not go into those sensitive waters (especially due to the filming in China) was valid. My issue was with [spoiler] The Mandarin being an actor in order to put a face on the terrorism throughout the film in a more idealized image. I felt it was a cop out to not use Kingsley’s work as The Mandarin as the main focus and instead relying on Guy Pearce’s Killian to shoulder the villainy and claim that he is the “true” Mandarin. When this was revealed in the film, you can hear the collective sighs of people who are familiar with the character.[/spoiler] Outside of that issue which was  honestly the proverbial elephant in the room, I think Guy Pearce was terrific as Killian and delivered not only in screen presence but as an overall threat. Killian surpassed Mickey Rourke’s  Ivan Vanko by leaps and bounds and really gave Iron Man a more mental and physical challenge. The evolution of Pepper Potts from sidekick to damsel in distress to being able to hold her own was another high point that I found welcome in this film.

Many have seen this film multiple times already and have come away either disappointed in the story as a whole or the way it ended, but let’s think about Iron Man’s role in the grand scheme of things as being a big cog in Marvel’s film universe. While people will want to see Fin Fang Foom and other Iron Man staples, the fact is that Iron Man has always been a solid character with a subpar rogues gallery and to churn out more films that may suck is a gamble I’d rather Marvel not take. The bulk of the films rogues are Iron Man’s most memorable and they succeeded in taking the franchise forward. Stark’s solo stories are over for the moment and in a way it's for the better as we can now focus on Iron Man in Avengers and not burn out Robert Downey to the point where he gets fed up making standalone films. Fans of the series will enjoy the action on display and the Stark Snark running rampant, while purists will have their issues (as usual). As always, stay after the credits but by now you guys already know that.