This movie terrified me as a child. My mother would watch it every night and I would hide under the damn covers hearing the rain of bullets and those high-pitched squeals. To this day I do not think I have ever seen the entire movie. Mind you, I have watched the other Alien movies and both of the AVP flicks with no real problem. So what is it about this flick that chills me to the bone?

I am not one for believing a situation is hopeless. But when you send a group of highly trained space marines into a hostile situation, who mind you, are all carrying guns bigger than them and they don’t stand a chance? Say hello to a very FUBAR hopeless situation. I mean think about it, how many of them survived: none, not a single one. “But Hicks made it off the planet……” And he died in his sleep chamber. Everybody else basically got torn apart, eaten or something equally as gruesome.

I think this bitch pretty much screams for herself here. Seriously, if this doesn’t scare your intestines clean, nothing will. Here we have the queen alien, who breeds a swarm of perfect killing machines. They take the form of the host they gestate in so I have seen everything from humanoid-looking ones up to the one Batman had to fight: 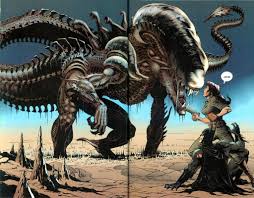 Its forearm is bigger than Batman. I’m out. Won’t be sleeping after this.