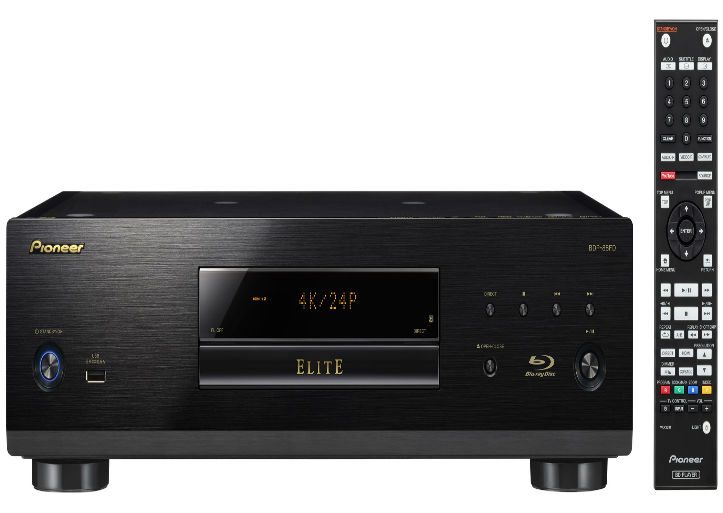 When people talk about Pioneer televisions the first thing they talk about is the quality of their Elite line and the great picture quality they deliver. Blu-ray enthusiasts will soon have something to brag too as Pioneer announced two Elite branded Blu-ray players at CEDIA. Both players will have the exceptional build quality we are all used to from Pioneer's Elite line as well as high quality video upscaling, audio reproduction and of course network capabilities.

The Pioneer Elite BDP-85FD and BDP-88FD Blu-ray players will be available in December with suggested retail prices of $1,000 and $2,000 respectively. While there is definitely sticker shock with those prices it should not come as a surprise given the quality of the Elite line.

If you need more info make sure to check out the press release from Pioneer below.

DENVER, Colo. – CEDIA (September 11, 2014) – Pioneer Electronics (USA) Inc. today launched the Elite BDP-85FD and flagship BDP-88FD Blu-ray players designed to be the ultimate reference players for today’s audio and video enthusiast.  The Elite models feature exceptional construction, high quality video upscaling, precise audio reproduction, and advanced network capabilities.  Both players set themselves apart from the competition in audio performance with their ability to redistribute processing power for audio only playback, shutting off all video circuitry when not in use.

“True audio video enthusiasts will see and hear a significant difference between our new Elite BDP players and other offerings currently in the market,” Chris Walker, director of AV product planning and marketing for the Home Electronics Division of Pioneer Electronics (USA) Inc. “The flagship BDP-88FD is a remarkable playback device built to provide the highest resolution playback possible.”

To deliver reference quality audio, the BDP-85FD and BDP-88FD employ the ES9018 ESS SABRE reference DAC for the utmost audio quality output, capable of playing DVD Audio, SACD and the most popular high resolution audio files. The BDP-88FD takes things further by using all four of its integrated DACs in parallel to greatly reduce noise.  Both players also feature a “Direct Function Circuit” for use in pure analog audio playback mode shutting off all video circuits and dedicating the processing power to the audio components.  The BDP-88FD provides noticeably increased audio performance with its use of a large capacity power supply transformer, independent quartz for 44.1 kHz/48 kHz playback, Hi-Bit and Hi-Sampling processing, and a DAC filter.

For convenience and plug-and-play capability right out of the box, both high-end players feature DLNA®, giving users the ability to quickly share audio and video content from a PC via the user’s home network.  Both models can also work as a DMP/DMR (Digital Media Player/Digital Media Renderer) to push content directly from a portable source such as a compatible smartphone or tablet.  The players were also designed to play high resolution music content from USB, disc, and hard drive devices.  In addition, both models offer YouTube “Send to TV,” making it extremely easy to watch YouTube videos using paired devices.

To greatly reduce unwanted vibration, both Elite models utilize a double-layered chassis for low center of gravity as well as a highly rigid bonnet structure.  Increased performance also comes from the use of acoustic electric capacitors and high grade components.  In addition, the BDP-88FD employs a 3-chamber structure separating its power supply, digital processing circuitry, and audio circuitry.

The BDP-85FD and BDP-88FD feature a Zero Signal Terminal providing a reference ground for audio/video signals. When connected to a display or AVR, the ground potential between the two devices is minimized resulting in a more accurate signal transmission.  Both models are compatible with Pioneer’s new iControlAV5 App that enables most smartphones to act as a basic remote control for the player when connected via a wireless router.  The app is available for download at no charge from the App Store or the App Store for iPhone, iPad and iPod touch. The iControlAV5 for Android smartphones is available on Google Play™.

The Pioneer Elite BDP-85FD and BDP-88FD Blu-ray players will be available in December with suggested retail prices of $1,000 and $2,000 respectively.

PIONEER, ELITE, the PIONEER logo and the ELITE logo are registered trademarks of Pioneer Corporation.

DLNA®, the DLNA Logo and DLNA Certified® are trademarks, service marks, or certification marks of the Digital Living Network Alliance.

Super Audio CD is a registered trademark of Sony Corporation.