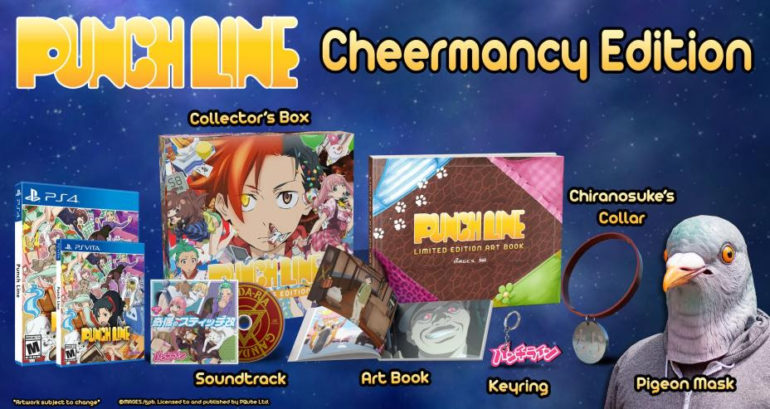 Nothing beats the heat like some good ol' summer fun. Nothing tops off said fun like a good Punch Line. The anime hit where a panty flash could destroy the world (literally) is coming to PlayStation. Knowing that anime fans love swag, there will be a special Cheermancy edition of the game. This loaded box will be exclusive to Rice Digital and we have the details here!

Penned by renowned writer Kotaro Uchikoshi, famed for the Zero Escape Trilogy, Punch Line is a gloriously over the top Visual Novel about a young man named Yūta Iridatsu – a normal high school kid whose soul is separated from his body. As if that wasn’t bad enough, if his excitement levels peak as a result of catching a glimpse of pantsu – he’ll trigger a world shattering cataclysmic event.

Yes, you heard right – a pigeon head mask. Ever wanted to dress up like a pigeon? (And, let’s face it, who hasn’t considered it once in a while?) Well, now you can. In public, in the safety of your home – we’re not here to judge.
The Punch Line: Cheermancy Edition is available for pre-order in both Europe and North America, priced at £79.99 / $99.99 / €99.99 and will be available this Summer.

You can pre-order the Punch Line Cheermancy Edition via the links below: