Going in to pick up my pre-order, a GameStop employee says, “wow I’m sorry.” I reply “for what?” and he says “for owning a Wii U, look at that wall, what games are for it? Big Bass Hunter, games you played three years ago on older systems?”

This is the problem with the Wii U – when people who are trying to sell you the console can’t even recommend it due to the lack of titles. The Wii U has been out for a year and a half and is still struggling to gain ground, but can Mario Kart 8 be the saving grace Nintendo is desperately looking for?

Mario Kart Wii is the 3rd highest selling racing game of all time, and for good reason. It is easy to pick up and play on a system which virtually everyone owned (except me). The problem was that Mario Kart Wii is almost too easy; a very basic Kart racer with few gimmicks to make it stand out. This was my problem with Mario Kart series for the longest time, until now. Mario Kart 8, while still accessible to the casual fan, does not hold your hand during the races. Furthermore, Nintendo has FINALLY embraced the idea that people actually do play online. In turn, all of these changes show that Nintendo is choosing to adapt instead of perish.

In 2013 I lamented Nintendo for having Mario Kart 8 rip off F-Zero in terms of using anti gravity. Well I should have waited until I played the game, because it feels nothing like F-Zero. Anti-Gravity in Mario Kart 8 is activated by driving up blue circle indicated ramps which let you drive on the wall. Here, the mechanics of the game are slightly changed. The camera perspective is still the same as usual while racing, even if you are upside down, but now bumping into players grants you a speed boast instead of knocking them to the side. This new mechanic, along with paragliding (introduced in Mario Kart 7) is in most of the 32 tracks, never feels gimmicky and is incorporated very well in many of the 16 retro tacks.

Tools of the Trade

Mario Kart Wii's biggest fault was its power ups. Too often would 3rd, 2nd, or 1st place be lost to someone coming out of nowhere from 12th place with an item or two that got them there. Luck played a bigger role than skill with the items, but no longer. Less frequent are Bullet Bills, which dash you from 12th to a 1st place finish or the impossible to dodge Blue Shell. While these items haven’t been removed entirely, the game features more skill-based saving grace items, like the Crazy 8. The Crazy 8 spawns 8 different power ups for you to use on your opponents, but you can’t throw them all out wildly, there needs to be thought in your use of power ups. Other items join the traditional selection like the Speaker, Boomerang, Fire Flower and my personal favorite, the Piranha Plant. The Pirahana Plant attaches to the end of your kart and for about 20 seconds destroys obstacles, block attacking items thrown by opponents, collects coins, and chomps at opposing racers.

I usually don’t talk about soundtracks for any title, but wow does Mario Kart 8’s shine. If the next generation of consoles have told me one thing so far, it’s that MUSIC can make a game so much better than it is already. The PS4 had Infamous Second Son with a soundtrack so good it gave me goosebumps and now the Wii U has Mario Kart 8, with a soundtrack worthy of buying. Mario Kart 8 has so much confidence in its music that two of the race tracks are devoted to it. They also happen to be two of the best tracks in the game. With that said, Moo Moo Meadows is my absolute favorite.

In Mario Kart 8, you never feel like you've hit a brick wall in terms of content. There always feels like there is something to unlock. Whether it’s characters, karts, kart parts, or tracks, there always feels like there’s something to strive to. By that same token, so many different variables make it so that there are hundreds of combinations when it comes to choosing a racer. Each kart has a different statistic, whether it be the wheels, paragliders, or characters altering it in some way. These combinations work great for the multiplayer of the game.

The multiplayer for Mario Kart 8 is some of the best couch multiplayer of this and last generation. Besides the usual multiplayer options,  you can finally play Grand Prix mode with a friend, meaning you and buddy can go about unlocking stuff together instead of being forced to go at it alone. Better yet, you and a pal can hop online and play against other people around the world together. Sure, it’s one thing to play online by yourself, but doing it with a friend just adds another layer to an already awesome online service. I played several races with people from all over the world, and there wasn’t so much as a hiccup.  But I do have a few problems with the multiplayer. For one, battle mode is a complete waste of time. Previously in the series you would have special battle arenas to fight in. Now, battles are relegated to the regular tracks themselves. Battles just feel slow and awkward and makes me wonder why they took out battle stages in the first place. Second, tournaments and just confusing, I still don’t know how they work, as the game does a bad job explaining exactly what to do. Finally, there is too much down time in-between races. I wish I could go from one race to the next, but you're forced to go back to the lobby to choose from 4 tracks to race on next.  With that said, online is still in a right direction for a company that has, in the past, been unwilling to embrace it. 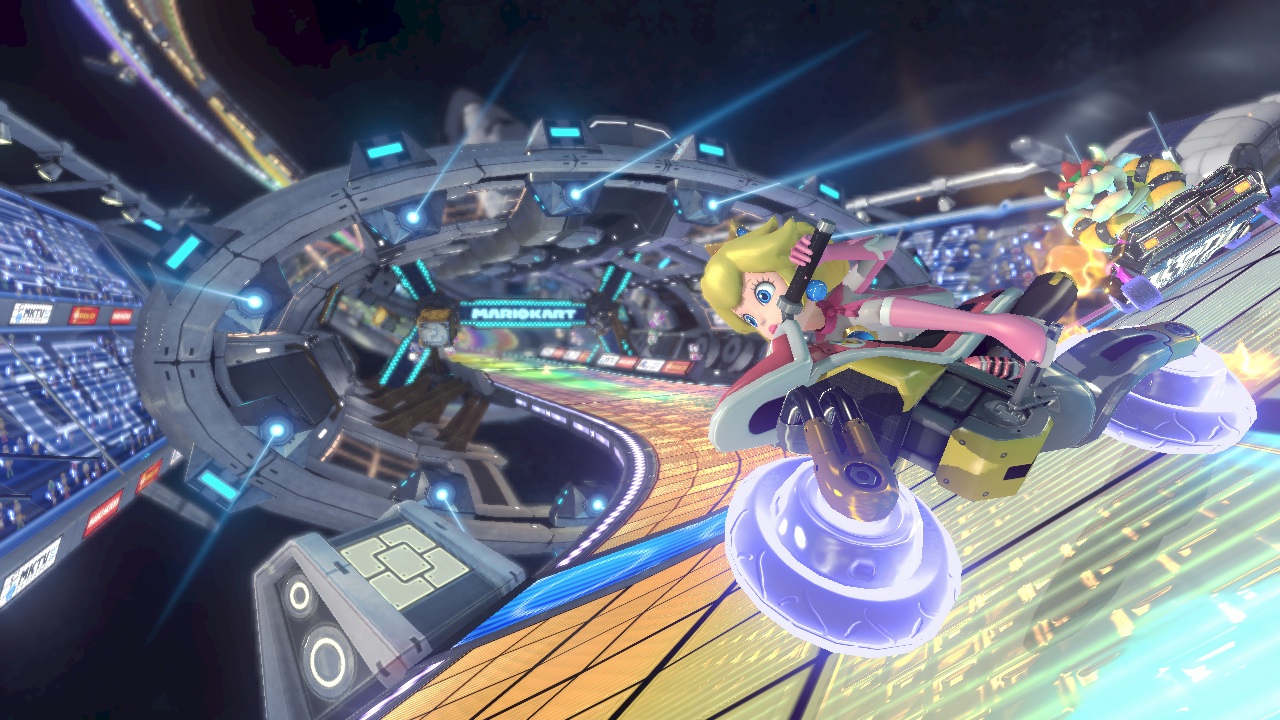 Following my purchase of a Wii U, I had some regret. Sure, Super Mario 3D World was fun and Wind Waker HD was a nostalgic trip, but I still didn't feel justified in my purchase. Then the news hit of Super Smash Bros. Wii U coming out months after the 3DS version, and I lost all hope for the system….and then I played Mario Kart 8. Nintendo has been long criticized for an unwillingness to evolve, but sometimes you don’t need to when your formula is this good. Mario Kart 8 has taken all the negatives of the series’ past and went back to the drawing board to create the best cart racer I have ever played. Nintendo has brazenly proved with its “inferior” system that it can still hang with the big boy,s creating the most fun multiplayer game on the market. The Wii U finally has its killer app and Nintendo has shown the world that it might be down, but it’s far from out.