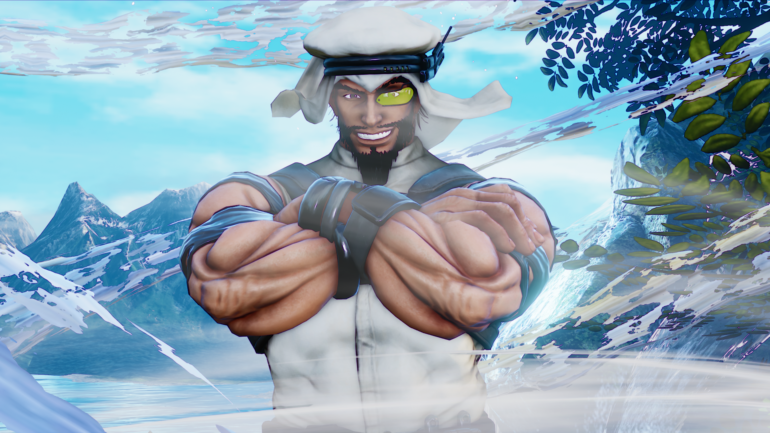 Capcom not only brought Street Fighter V to gamers attending the Games15 show in Dubai, but they also took the time to introduce a brand new character named Rashid. Rashid brings a plethora of wind-based attacks to Street Fighter V and while is he is latest new “world warrior” he most certainly won't be the last. Rashid and Necalli are the latest new challengers, but rumors are we may see two or three more. What do you guys think of this new fighter? Let's hear it in the comments.

[toggles behavior=”toggle”] [toggle title=”Show Press Release”]Another NEW challenger has been introduced to the Street Fighter V roster! Rashid was recently revealed at the Games 15 event in Dubai, where Yoshinori Ono took to the stage to introduce the newest member of the Street Fighter family to the crowd. Attendees at Games 15 were then treated to a brand new playable demo starring Rashid, in addition to all of the previously announced challengers:  Ryu, Ken, Chun-Li, Cammy, Vega, M. Bison, Birdie, Charlie Nash, Necalli and R. Mika.

About Rashid
Joining the series from the Middle East, Rashid is an easy going and laid back character that has a very keen interest in technology and the latest gadgets on the market. His fighting style takes cues from parkour and he mixes it up with his unique ability to harness the power of wind. Always first in line to buy new tech, he uses these devices to research and create his fast-paced acrobatic moves, leaving his opponents in the dust and wondering what’s coming next.

About Street Fighter V
The legendary fighting franchise returns with Street Fighter V! Stunning visuals depict the next generation of World Warriors in unprecedented detail, while exciting and accessible battle mechanics deliver endless fighting fun that both beginners and veterans can enjoy. Challenge friends online, or compete for fame and glory on the Capcom Pro Tour.

For the first time in Street Fighter history, all post-launch gameplay-related content in Street Fighter V can be earnable via gameplay, free of charge. All balance and system adjustments will also be available for free, so players will always have access to the most current version. Through a strategic partnership between Sony Computer Entertainment Inc. and Capcom, the next generation Street Fighter experience will offer cross-platform play that will unite PlayStation 4 and PC fans into a centralized player base for the first time ever. The path to greatness begins here: RISE UP![/toggle] [/toggles]