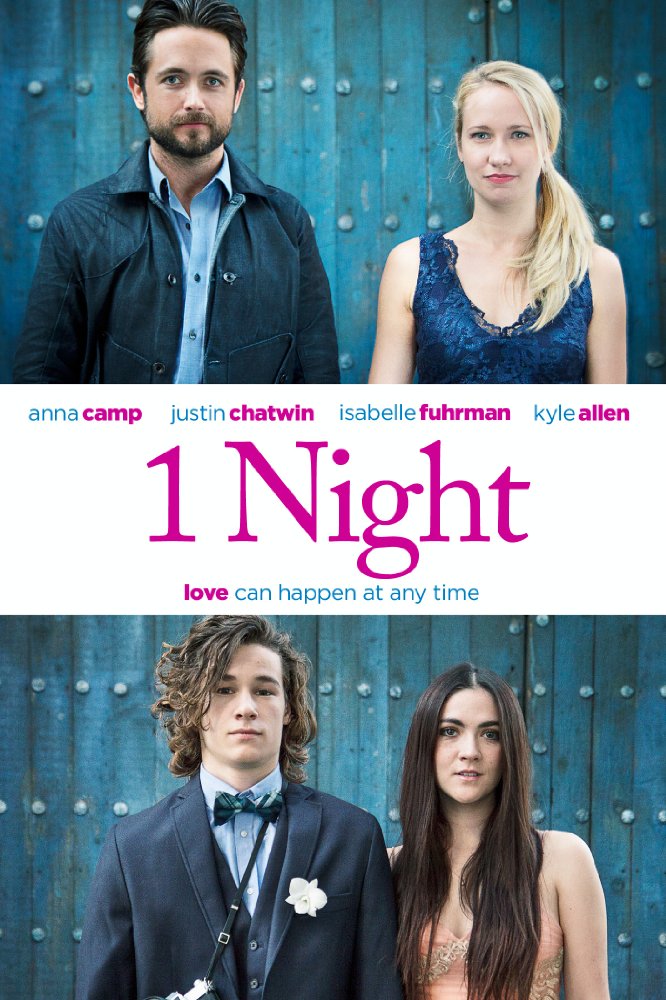 Bea, a worrisome teenager, reconnects with her introverted childhood friend, Andy. The two overcome their differences in social status one night after their high school prom. Thirty-something Elizabeth must decide whether to salvage her relationship with Drew after much personal disappointment. Past and present collide as two couples explore love over the course of one night at a hotel. – via IMDB

I admit freely that I am a sucker for a good romance movie. 1 Night, while a romance at heart, takes you on two separate rides that many people are all too familiar with. Do we work at this relationship or do we give up? How can I show the person I have feelings for what they mean to me?

Elizabeth (Anna Camp) is a married woman in her 30’s who is working to figure out if she should try and salvage her marriage to Drew (Justin Chatwin), a photojournalist who travels the world more than he stays with his wife. In a last ditch effort, the couple books a night at a hotel in an effort to rekindle their lost spark. We watch the two navigate the murky waters through past betrayal, loneliness and trust issues, all while giving relationship advice to two teenagers at their senior prom at the hotel.

Bea (Isabelle Fuhrman), is your typical anxiety-filled angsty teen stressing about what she is going to do after she is dumped at prom by her boyfriend and has no college prospects. Andy (Kyle Allen) is a quiet, Stanford-bound photographer on the yearbook committee and also a childhood friend of Bea. As is with all these stories, Bea and Kyle grew apart over school and Kyle harbors a crush on his former friend. With summer break and college looming, he needs to make a move fast or lose this girl forever. You watch them re-establish their friendship and begin their budding relationship, remembering how innocent high school love can be.

Having been in their place before, both Elizabeth and Drew tell Bea and Andy what they have to look forward to in life, most times being cynical yet envious, as they were once as innocent as the teens.

While charming and predictable, 1 Night is a sweet movie to curl up with your significant other and watch. Camp and Chatwin do a good job of making you feel emotionally invested in their ending as a couple. You root for them, you cry with them. Fuhrman and Allen are equally as good in their roles, although I feel the meat of the movie was essentially the other couple. They simply provided the common ground needed to revisit a failing relationship. This is further pushed with the thought provoking ending where you definitely feel that Bea and Andy are essentially dramatizing Elizabeth and Drew’s backstory and that they are the same people years prior, but it isn’t confirmed. 1 Night surely makes you think about being with someone throughout the years and how to keep the same level of love and attention start to finish.

If you are looking for a romance movie that makes you think a little, 1 Night is a good pick. While I feel the interactions between the two couples were a bit weird at times (at a first glace they seem to not know each other, in others they do), it moves the story along. 1 Night will make viewers in need of a relationship evaluation take heed of the film’s core ideas and maybe think a little in terms of what they want in affairs of the heart.