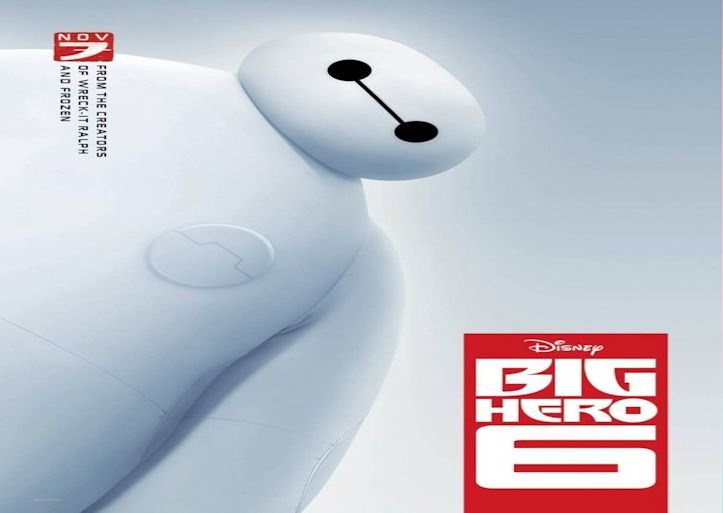 The special bond that develops between plus-sized inflatable robot Baymax and prodigy Hiro Hamada, who team up with a group of friends to form a band of high-tech heroes.-via IMDB

I had followed the development of Big Hero 6 for some time due to its Marvel Comics origins and the more I trailers I watched, the more I felt inclined to see this in the theater. Big Hero 6 is actually the first animated feature I've seen in a theater in some time and I am glad I got to see it there first. Big Hero 6, in a addition to being a superhero film, is a film about relationships between both friends and family and how they help shape who we are as people. The first relationship that serves as the foundation to the film is that of the main protagonist Hiro and his older brother Tadashi who just happens to also be Baymax's creator. The relationship between the brothers carries over to the later relationship between Hiro and Baymax. Baymax starts off as a huggable medical robot who seeks to make Hiro feel better after a personal tragedy that happens in the film. Baymax's desire to help Hiro cope leads to Baymax evolving into a hero and creating a stronger bond between Hiro and his friends who become heroes as well. The underlying tones of different relationships is great for kids and while the film had a lot action, it also had a lot of sad and heartwarming moments. You never truly know how a film touches a child until you see them shift from sadness and tears to joy and jubilation which happens often ti kids watching this film. The Marvel influence in Big Hero 6 is subtle in a good way and there are a few easter eggs in the film worth looking for as well.

Disney delivered a true showcase of animation with Big Hero 6. The films' vibrant colors and fluid computer animation show that Disney is at the top of their game when it comes to animated features both with and without Pixar's involvement. While many fans hold The Incredibles as the gold standard in animated superhero films, I definitely feel that Big Hero 6 has earned the “gold standard” moniker as well and has created heroes for a new generation of kids.

The voice talent in this film truly made these characters iconic and Scott Adsit truly stole the show as Baymax. You know an actor delivers with their character when you end up quoting lines from the film hours after you see it. The fist bump exchange alone brought a smile to many faces. Damon Wayans Jr. and Jamie Chung were also solid in their roles as Wasabi and Go Go and really brought their personalities to the screen effectively.

Big Hero 6 is not only an amazingly well done animated feature, but also a Marvel film underneath the soft huggable surface so expect a lot of action and great dialogue. This film is great for kids but also for adults given some of the subjects addressed including personal loss, anger and revenge. I am sure a few parents will have to explain a couple of things to their kids after the film which is good. As a Marvel fan, I recommend you give this film a shot and just sit back and enjoy some lighthearted filmmaking at work. The quasi-parent in me recommends you take your kids to see this film as well . Lastly, I will remind you that this is a Marvel film so I recommend you stay after the credits.