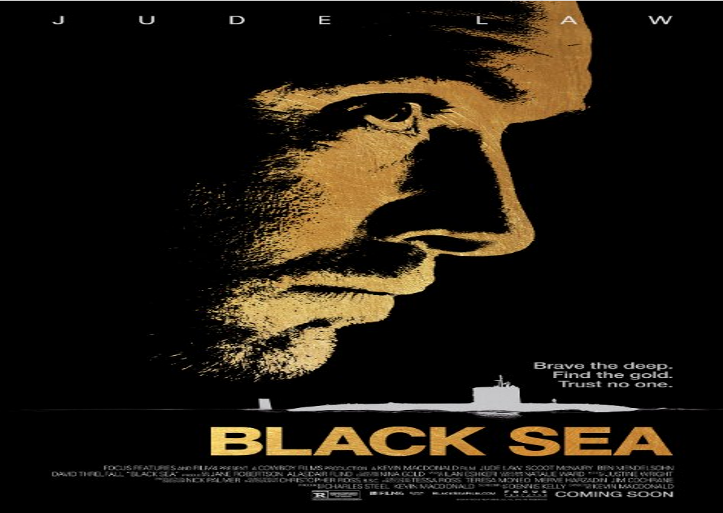 A submarine captain fired by his salvage company gets a chance at glory and redemption when he is presented with an opportunity to salvage a German U-boat loaded with Nazi gold alongside a crew of misfits. What happens when the mission goes awry and tensions and language barriers turn a crew against each other while their lives are on the line? Will they pull it together and survive or will the crew fall victim to the Black Sea?

When presented with films taking place underwater or in space it is always a must that the acting be strong enough to detract from the emptiness on screen and Jude Law and his crew do a solid job in that regard. Director Kevin MacDonald succeeded in making the threat of death front and center at times and did a great job utilizing the strengths of the setting to truly drive the severity of certain key scenes home.The bulk of Black Sea was filmed on a sound stage and on an actual submarine moored in the River Medway which made for a lot of intense and dialog-heavy scenes. It forced the cast to constantly be acting even when they were not the focal point of a scene which to me was a great way to exhibit realism. While the setting and performance by Jude Law are high notes I do feel that Scoot McNairy, Ben Mendelsohn, and Bobby Schofield had equally strong performances. Scoot McNairy channeled a bit of Bill Paxton from Aliens sprinkled with the douchey antics of Paul Reiser from the same. This made him not only an interesting character but truly showed the depths that a man would go to in order to save his own skin. McNairy is actor who we'll be seeing a lot of in the coming months as he is slated to be in a variety of film and TV projects including Batman vs. Superman: Dawn of Justice. Ben Mendelsohn much like McNairy has been in a litany of films including The Dark Knight Rises where he played Daggett. Mendelsohn's portrayal of unhinged Fraser was intense and it really gave fans a villain at the start of the film, even though, the true villain was greed. Bobby Schofield's Tobin was one of the high points since he embodied hope and innocence for Jude Law's Captain Robinson who was blinded by the need to succeed and the desire to reconnect with his family. Tobin's character also was one character who was truly easier to connect with.

I'll be honest though and say that this review will not be all sunshine and rainbows since I did have some issues with the film. The proverbial elephant in the room was the lack of character development. When the film begins you meet Robinson (Jude Law), Blackie (Konstantin Khabenskiy) and Kurston (Daniel Ryan) who were recently fired from their jobs. While we get a bit of backstory for Robinson I felt more could have been done to flesh out the character of his two “close” friends. This same issue was prevalent with the introduction of Tobin as we really don't get much backstory aside from his relationship with Kurston and how it tied into him getting on the sub.

The “dirty dozen” crew of the submarine, much like the principal cast had practically no backstory either. Considering they were a mix of nationalities, I feel that  more time should have been devoted to character development. Tobia Menzies who played Lewis had practically no backstory till the third act. I would have liked for the film to be a bit longer just so that you could learn a bit more about the cast but alas we were not that fortunate. A lot of of reviewers had issue with the accents, but I felt that Law went to great lengths to deliver an authentic Scottish accent. The Russian half of the cast was talented and had great screen presence albeit fodder for the events that unfolded throughout the film.

The film was not a spectacle of special effects and I was fine with that because the story was gripping and the ending was actually a bit surprising considering the chain of events.

It is easy to measure this film against other submarine films like Das Boot, K-19: The Widowmaker and even Hunt for Red October, but this film is definitely not like those films. Black Sea is a solid thriller that truly pushed the envelope with it's confined filming style. Kevin McDonald did a great job with the casting for this film and truly showed a new dimension of Law's acting prowess. It is unfortunate that as well rounded as the cast was we learned hardly anything about their characters other than the small bits tossed among the plot. The film is worth a watch even with the issues regarding character development. Is it worth seeing in the theater? I think this film falls into a home viewing versus a trip to the theater.