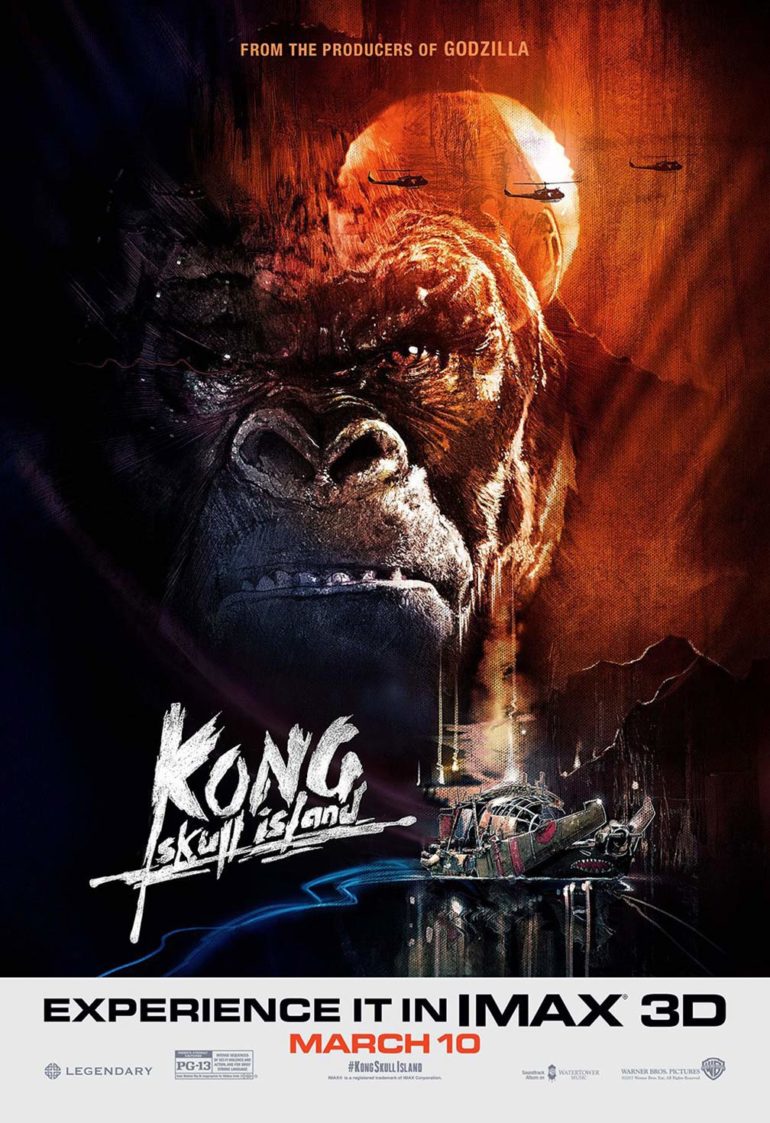 A team of scientists explore an uncharted island in the Pacific, venturing into the domain of the mighty Kong, and must fight to escape a primal Eden.-via IMDB

I walked into Kong: Skull Island with the mindset of just kicking back and enjoying what was being billed as an action-packed ride from start to finish. I am pleased to report that the film definitely did deliver in that capacity, all while establishing a deeper mythos when it comes to King Kong. It also crafted some promising stories for future films in the “Godzilla Cinematic Universe”. The film starts off establishing the film's key players which at the start are John Goodman and Corey Hawkins who represent Monarch and want to explore Skull Island for “research” purposes. We also have Brie Larson, who plays an anti-war photographer who wants to document the trip for additional fame, Tom Hiddleston as the tracker brought on the expedition and a former SAS officer Samuel L. Jackson, whose character is a soldier looking for one last fight with his platoon after the abrupt end to the Vietnam War. While the characters each have their own agendas, their approaches and motivations change as the film progresses with villainous transitions developing over the course of the film.

Kong was introduced quickly and his origins got further explanation once John C. Reilly met the group. While Kong was a big part of the film, we also saw a variety of other creatures that inhabit Skull Island (and most of those inhabitants are out to kill you for the most part). Kong didn't only have human antagonists for this film, though. Much like Godzilla's recent film, the “King of Skull Island” had to face some monstrous opposition as well and the with them came the dangers those monsters would present if Kong no long protected the island. Kong: Skull Island succeeded in balancing the human element while keeping the film's monsters front and center which is something the recent Godzilla film stumbled on for the most part.

This film also showed us what a competent leading man Tom Hiddleston can be and did not crutch on the “damsel in distress” trope that is common in most Kong films with Brie Larson's character. The mocap for Kong was stellar and Toby Kebbel did a fantastic job giving Kong personality, which is important for fans to get invested in the driving force of the film.

Special effects for Kong: Skull Island did not disappoint and leveraged 3D perfectly. The IMAX presentation of the film is a must to properly showcase the larger than life monsters on display. If you can see the film in 3D please do so, but if it is a matter of 3D or IMAX I would recommend the IMAX viewing first and foremost.

Kong: Skull Island is a fun film with heavy doses of action, great monster fights and humans who don't detract from the film and actually add to it. This film moves fans closer to an inevitable King Kong / Godzilla film at various points and I am looking forward to seeing how it all comes together. Fans of both creatures will definitely want to stay after the credits to see what comes next.