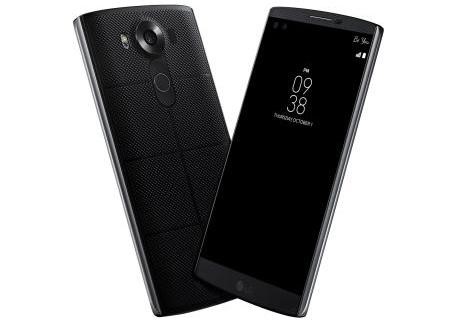 As a longtime Samsung Note user, when our pals at RF Mag asked us to take the LG V10 for a spin, I immediately felt that the dual screens and cameras were just tossed in gimmicks to compete in a the crowded 5+ inch phone market. However, I was pleasantly surprised not only with how LG flawlessly executed these “gimmicks” but how seamless they were in the overall usage of the device. With that said, you're here for a review so let's get to it!

LG stepped it up in the materials department with the V10. Gone is the plastic/cheap feel and instead, you get a great textured back with some steel accents. The volume and power buttons are on the back of the device and the placement takes a bit of getting used to. I was good with the button placement within two days of consistent use. Results will definitely vary, though.

The power button not only turns the device on and off but is also a fingerprint reader. I'd rate fingerprint detection on this device as well executed but at times not effective due to button placement (you have to get your finger just right).  The star of the show though is the 16mp camera that has a 1.8 lens and image stabilization.

LG did a great job by allowing the V10 to have expandable storage and a removable battery as those are things that are becoming less and less prevalent from most manufacturers.

The 5.7-inch display is incredibly sharp and bright with some solid black levels. The display has a 2,560 x 1,440-pixel resolution and is super responsive. While the main screen was stellar, the real item that needs to be addressed is the second screen. The 2.7 “second screen, while decent for notifications, may be seen as being “too small”  by most and not as informative as we would like. Emails, missed calls and other notifications were good to access on the fly but you could get the same info from the pull-down shade most times. I felt this addition was done as a direct shot at Samsung and their Edge series of phones. I am sure the second screen will be more versatile in future incarnations of the device. It was not terrible don't misunderstand, just not a feature as rich as you would think.

The V10 runs an LG-skinned version of Android 5.1 Lollipop. While many people are not fans of the LG-skinned OS, I really had no issue with it and quite honestly if it was an issue it would be remedied by a third party OS skin. The OS leverages the fingerprint scan effectively and can store up to four fingerprints which not only will allow access to the phone but also quick memos and pictures. Android Pay users will enjoy an extra layer of security with the fingerprint scanner.

Overall, the LG software ran smoothly and had very few hiccups when pushed to the limit.

When it comes to music, one of the biggest things that impressed me with the V10 was how it handled audio and the reason I say this is because this handset comes equipped with a 32 bit Hi-Fi DAC which is capable of playing lossless formats such as FLAC, WAV, ALAC, etc. The DAC also provides auto gain control and audio fine tuning which will make both onboard music and streaming music sound amazing.

Night photography not only looks stellar but maintains a large percentage of its details. I am inclined to say that the V10 camera is actually better than the one on my Note 5. The software interface for the camera is intuitive and easy to use for a quick point-and-shoot situation but is also deep enough to hold its own against other well-established cameras and mobile devices. The manual mode for the camera really impressed me and made shooting with this phone a blast.

The front-facing camera was solid and while it was good for a wide-angle selfie, I felt the handset really did not need a dual camera. I felt that addition was a bit on the excessive side but given the increased selfie and Snapchat usage nowadays it does have its place. Users can opt for the standard 80-degree lens or they can show more background or more people via the 120-degree lens.

The camera also allows for multiview recording which utilizes all three cameras (two front and one rear) on the V10. This unique feature allows you to capture the people around you and the scene in front of you at the same time.

Another unique camera feature was the gesture shot and view which allows you to shoot and review photos using only gestures. If you are a hardcore selfie taker this feature will see a lot of use. I would have liked some voice commands as well just for those instances when you don't want to  use the gesture controls.

While we know that LG knocked it out of the park when it comes to photos, we have to ask ourselves if the video is just as good. I am pleased to state that it most certainly is. The video capabilities will certainly give  point-and-shoot cameras a run for their money. Image stabilization not only leads to clearer photos (in most situations) but again outperformed the Note 5. Manual controls add an additional layer of customization to an already feature-packed camera. Here are the items that can be tweaked via manual video mode:

The manual video modes and on-camera editing suite truly give you a mobile studio on the go and make it easy to take video clips and create something special. I was very impressed with these features and loved taking them through their paces.

Call quality via the T-Mobile LTE network was crisp and the HD calling was rock solid. We experienced no call drops and parties on the other end said we sounded super clear both via speaker and via the handset. Signal strength stayed strong in areas where my signal is usually weak.

The removable 3,000mAh battery is capable of providing up to 21 hours of talk time and can last up to 6 days via standby. Battery life is very important to me and my constant emails piled with app use and games usually wreak havoc on most of my devices, but the battery held up for most of the day albeit with minimal usage. Battery life did take a hit when camera usage increased over the course of this review but as always your mileage may vary. The removable battery definitely pays off if you are taking a lot of photo and video as you can swap out and keep shooting which is becoming less and less normal as more smartphone manufacturers opt for non-removable batteries.

As a hardcore Note 5 user who spends more time with LG monitors and TV's I was truly impressed with all of the solid technological enhancements LG is incorporating into their handsets. The V10 is not only a workhorse for photo and video but also excels when it comes to listening to music. While the small notification screen was a nice touch, it definitely needed to be a bit bigger. While many will take issue with the LG-skinned Android OS, I personally found it easy to navigate and at times less cumbersome than what Samsung offers. LG makes a strong case in the 5.7-inch phone/phablet category and I can honestly say that the V1o is strongly worth considering if you are in the market for a new phone.