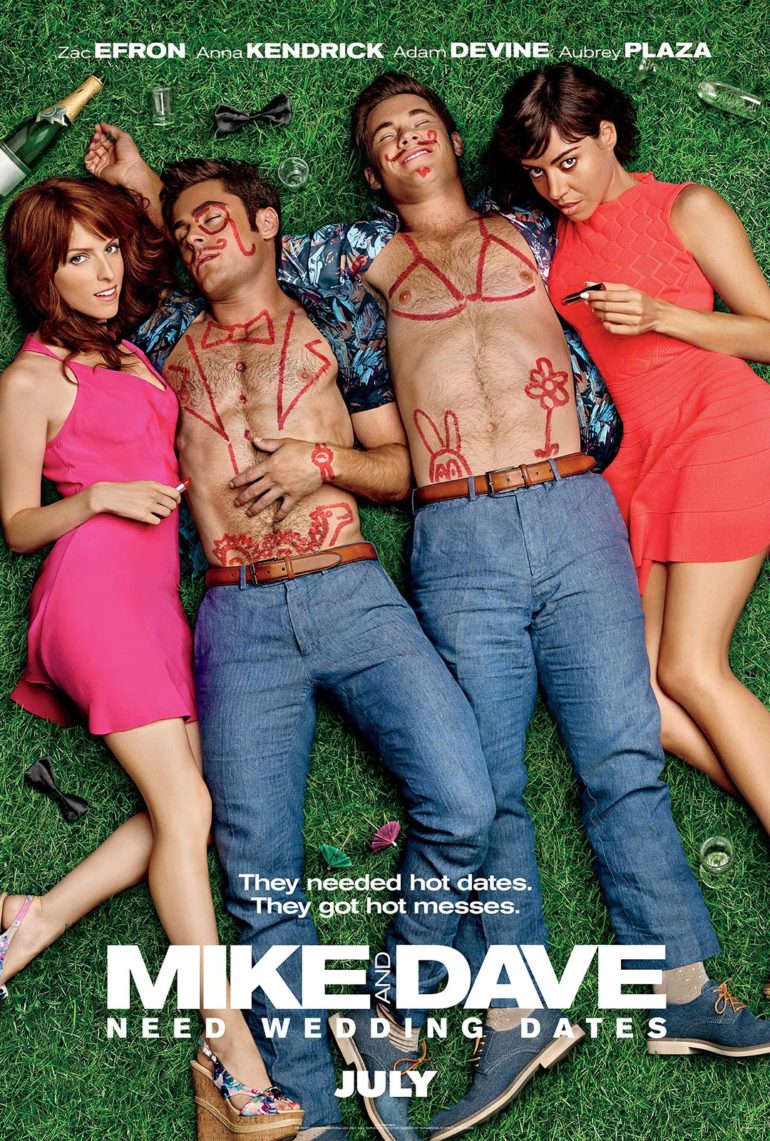 Spoiler Free Plot Synopsis: Two party animal brothers named Mike and Dave Stangle (Devine and Efron) place an ad on Craig’s List to find the perfect dates for their sister’s upcoming wedding in Hawaii. What they get are two out of control ladies with issues looking for a free vacation.

Loosely based on a true story, Mike and Dave Need Wedding Dates was pretty much exactly what I thought it would be – and I am fine with that. Full disclosure – I am usually sucked in by trailers for comedies and then walk out disappointed after that one thing I thought was hilarious in the trailer is the only funny thing in the whole movie. This has happened more times than I’d care to admit – but not this time.

I never used to have much to say about the comedic capabilities of Zac Efron. I think we all can agree that High School Musical pretty much followed him around until around 2014. But lately, he has really come into his own with movies like Neighbors, Neighbors 2 and That Awkward Moment. In my opinion, he is funny, entertaining and only getting better. I have had a love/hate relationship with Adam Devine in his Pitch Perfect and Modern Family roles, but I think he was a perfect casting choice as Mike Stangle. His yelling, carrying on and mannerisms made okay comedic writing much more enjoyable. This is a guy you want to laugh at having a spazzy, out of control breakdown. Putting Efron together with Devine gives you have a duo that provides more laughter than I would have thought.

Now on to the girls. I feel that the writers tried to make the ladies almost equal to the guys in terms of their partying ways, and then throw in some psycho to add to the story. While it was funny in moments, it was a bit annoying in regards to Alice’s (Kendrick) dumped-at-the-altar back story. Aubrey Plaza was decently funny as Tatiana. But I would have liked more out of her character. I feel that the ladies could have been played by anyone – but this may be because of the story itself. Their comedy was a bit dry. The rest of the supporting cast were good with what they were given. A highlight was Stangle sister Jeanie (Sugar Lyn Beard), who had one of the most memorable scenes in the movie, getting an extra special massage courtesy of Alice.

Recommendation: Mike and Dave Need Wedding Dates is a mindless 98 minutes of comedy fluff to make you laugh and enjoy yourself. I honestly did. Don't expect Oscar-worthy comedy and you will be fine. Several scenes stick out in my head as hilarious, like the massage scene and the ATV-tour. So, if you want raunch and d-jokes and drinking and laugh out loud fun, head out to the theater and check it out.