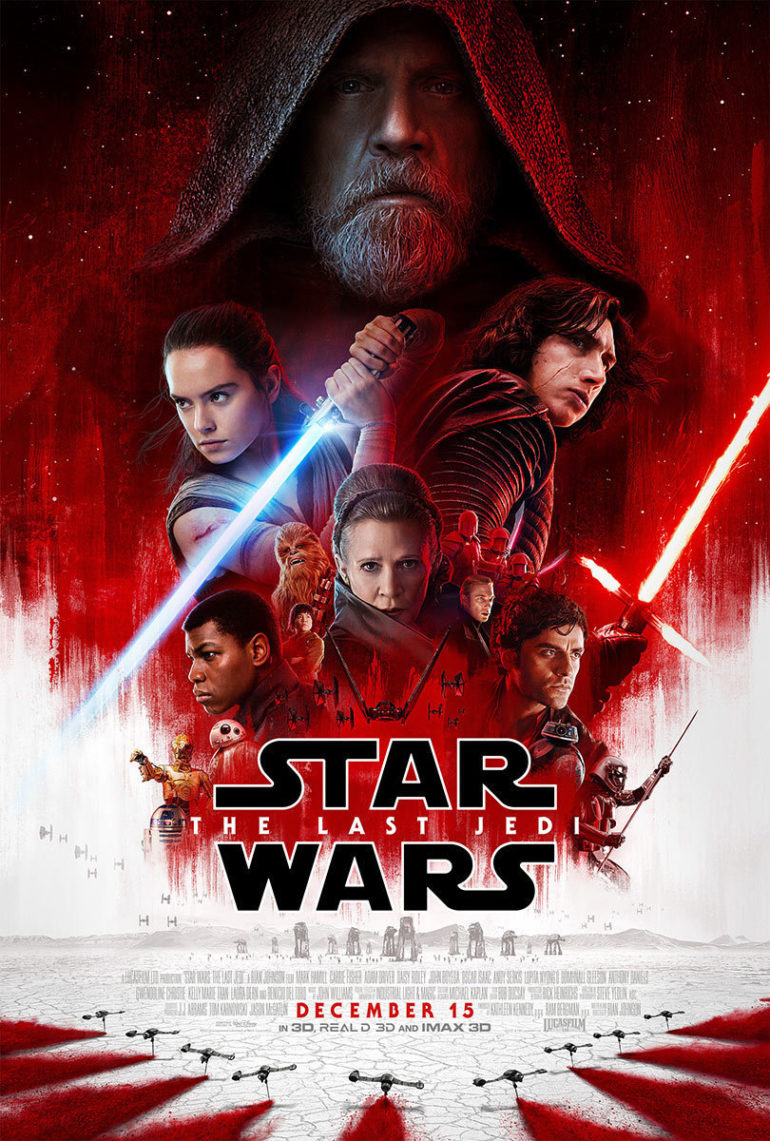 Rey develops her newly discovered abilities with the guidance of Luke Skywalker, who is unsettled by the strength of her powers. Meanwhile, the Resistance prepares to do battle with the First Order. -via IMDB

The wait is over! Episode VIII of Star Wars is here! A lot of people (including myself) had mixed feelings about The Force Awakens, and while that film created some compelling characters and raised some great questions, a part of me felt underwhelmed at points and I was looking forward to seeing some of those questions answered in this new installment.

So, were those questions answered? Without spoiling anything, I will say some were but in their place, new ones were created, which I guess is good to a degree. I will add that while I appreciated some of the risks taken from a story perspective, it did drag a bit at times but kicked itself into high gear when the film's third act kicked off.

All the usual suspects were back for this sequel (minus Han Solo of course). We got to see some decent character development for Kylo Ren, who while still a petulant whiny baby in the early goings evolved throughout the film into a complex protagonist. The same could be said for General Hux, who is more than just a guy Snoke yells at or Kylo threatens. Hux is interesting because he seems to have his own agenda and doesn't think too highly of Kylo Ren. Hux is the Starscream to Ren's Megatron, and that dynamic is definitely something I look forward to seeing explored more in the next film.

Rey's story continued to unfold in this movie and while we got some more context on her origins, I feel there remains much more to learn about her past as the “revelation” presented in this film seems like an easy out for the sake of the plot. I certainly hope that is not the case and is just some good misdirection. Daisy Ridley has tremendous chemistry with her co-stars and Rey's time with Luke showcased that well. Luke, of course, is not the Jedi we remember and Mark Hamill's work to showcase the character's regret and internal conflict were stellar and leads to an amazing cameo that truly brings his feelings full circle. Kudos to Rian Johnson on that cameo which will surely bring a smile to many old-school fans faces.

Poe Dameron saw a lot of growth as a character in this film and truly became more than just a Han Solo substitute. The brash, cocky pilot we saw in the first film and in the first half of this film truly came full circle by the time the credits rolled. While there were some out-of-place comedic moments with Dameron at the start of the movie, his growth into a leader for the Resistance is too prominent to ignore. Now, for all the good going on there were some missteps as well, particularly with Finn, who still seems to be bumbling his way through the story. His story arc with new character Rose, while crucial to various parts of the story felt a bit forced especially in the film's third act. I will say that Finn's moment with Captain Phasma was definitely awesome though.

Carrie Fisher's General Leia had her own badass moment in the film and while I questioned the effects involved it was a cool moment to see nonetheless. I am curious about how they plan on addressing her absence in the next film or if they will use CGI. I've heard conflicting reports on the character's future and while the CGI recreation of Tarkin in Rogue One was well done, I feel we are still a long way from recreating deceased actors flawlessly.

Star Wars: The Last Jedi is the continuation of the saga started in The Force Awakens and while the story and plot advancements opened up a litany of new questions, the film succeeded in giving old and new fans things they could appreciate. The underlying tone of letting go of the past and looking towards the future is a message the film drives home and it's with good reason as there is so much more we have to learn about the film's new protagonists and antagonists. It would be easy to compare this film to past films in the franchise and nitpick at the rights and wrongs but I recommend viewing these movies outside of the shadow of past films and appreciate their contributions to the overall Star Wars mythos.

While I did see the film in 3D, I once again felt it was not needed. If I had to recommend the best way to view the film it would be in 2D IMAX or RPX which will give you the amazing sound as well as a more immersive viewing experience. Seeing a Star Destroyer on a large IMAX or RPX screen never gets old.

It is truly an exciting time for Star Wars fans and Star Wars: The Last Jedi definitely succeeded in getting me excited for future films. What did you think of the film? What did you love or hate? I'd love to hear your thoughts so feel free to share in our comments section or via social media.