Ladies and gentlemen, if you are not familiar with the man above, his name is Cyril Figgis. His official title at ISIS is comptroller but he has worn many hats; sadly, none of them were named Jimmy. Since Lana dumped Archer, Cyril has gotten way more tail than Sterling; he’s boned most of the women at ISIS and unbeknownst to him he is the father of Trinette’s wee baby Shamus. Despite the large amount of poon tang this man gets, he gets less respect than Rodney Dangerfield. Cyril is tired of getting the shit end of the stick and he’s finally ready to do something about it. 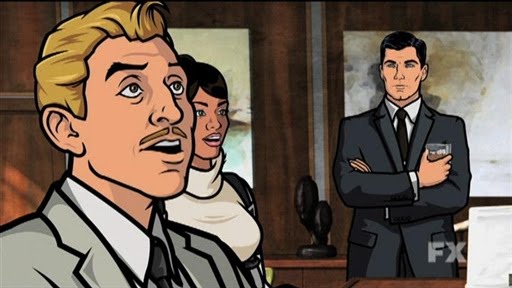 We open to the ISIS gang unwinding at a bar and Archer showing that despite being a colossal moron, he does have the talent to be a spy. Even while being so drunk he can hardly stand, he can still hit a dart board bull’s eye three times in a row. Cyril, on the other hand, cannot hit the broad side of a barn, much less a dart board – and he’s completely sober. We catch a flashback to the start of Cyril’s low self esteem and lack of confidence and we see it links to the daddy issues mentioned in season 1. As the party breaks up, Cyril is picked up by an Englishman and a pair of hot Asian twins. The next day, ISIS has a virus that makes a pirate walk on screen to some music while his parrot keeps squawking “WHAT WHAAAAAAAT?” Krieger doesn’t know what to do to remove the virus but Cyril claims that he does. Cyril to the rescue, right? Wrong. None of his coworkers have any faith in his ability to do anything right so they won’t let him near the mainframe. It seems the company he kept last night had him install the virus and then gave him the antivirus but now he cannot use it. Womp-womp.

The man Cyril met with the night before was George Spelvin, and he explains to Cyril that he has developed security systems for most of the world’s top intelligence agencies. The problem is that he is too good at his job so no one wants to pay him to upgrade. Enter the virus installed at ISIS. Not only will it prove that these systems can be hacked, it will steal the ISIS field agent roster so that Spelvin can sell it for roughly fifty million dollars. With time being of the essence before ISIS agents are exposed, Cyril confides in Archer and Sterling gets pissed. He gets a lot less pissed when he meets the two hot twins pictured above. He even manages to stay less pissed when they try to kill him. Spelvin and the twins corner Archer and the only one left to save the day is Cyril. Cyril has a gun and he threatens to shoot Spelvin but Spelvin feels it is a bluff. Knowing Cyril’s insecurities, he starts playing on them. Cyril manages to grow a pair and puts a good six in the computer that is downloading the ISIS database. So way to go, Cyril, you’re a hero. Too bad you can never tell anyone because it was all to clean up your own traitorous mess.

This episode was gold. Not only did we get a proper explanation of Cyril’s daddy issues originally mentioned in season 1, we got a classic Archer ep filled with the office ineptitude and madness that makes you wonder how any of these people are alive. No one is freaked out by the damn virus on the computers because they are too busy going “WHAT WHAAAAAAAT?” with the damned parrot. Archer comments on how the metal door they need to get through “reminds him of Wolverine’s bones,” but he is still stupid enough to shoot at it. We see the culmination of Krieger's depravity as well – last season, he had a robot arm he used for sex that he named “Fister Roboto.” This season, he’s created a hologram of an anime character so real that he’s been allowed to legally marry it. As a fan and a reviewer, I am glad to say that Season 2 of Archer is in full swing and it is definitely superior to the first season.