False identities in the spy world are commonplace. From codenames to phony IDs to double identities, the spy game is all about secrets and lies. These are things that you generally don’t expect in your everyday office pool however. Sure, there might be the couple that sneak off to the broom closet for a quickie or the up and coming executive who got her position on her back, but certain things you figure you can trust to be the truth at your place of business.The name on your coworker’s check for instance. This does not seem to be the case at ISIS and the further we get in the story, the more secrets seem to come to light.

We start this episode with Malory being pissed about Cheryl and Pam being late to work. She even goes as far as saying that Cheryl is fired and she wants a new secretary by lunch but since Pam is HR and she isn’t in either, she grills Cheryl about the lateness when she shows up. Cheryl explains how masked kidnappers grabbed Pam and tried to grab her. When asked why anyone would want to grab Pam, she explains that they probably thought they were grabbing her instead. We also finally find out Cheryl’s last name, the fake one and the real one. Turns out Cheryl Tunt is the daughter of the original railroad tycoon family and she is worth half a billion dollars since the death of her parents one week prior. So of course, Malory offers the protection of ISIS for a very “reasonable” fee. 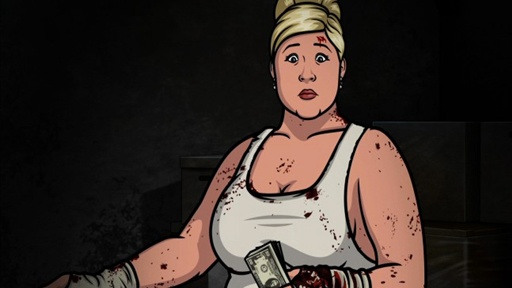 Meanwhile, the kidnappers are just beating the teeth out of Pam, who can’t help but laugh at how weak the guy is hitting her. Seems Pam paid her way through college by dominating an underground fight club. Deals progressively go south as Malory offers a measly $5000 for Pam’s return, Cyril kidnaps Cheryl since she owes him $3700 and Pam tells the kidnappers she will get them into ISIS since Malory left her ass to die. The kidnappers make their way up to the main ISIS offices at the same time that Archer & Ray have “rescued” Cheryl and she & Cyril start arguing. A shootout leaves all but one of the kidnappers dead. Pam remedies that by snapping his neck and verbally letting loose on the whole ISIS staff for not giving half a shit about her welfare. The episode ends with Pam about to beat the crappy $5000 ransom offer out of Malory’s ass and asking “Anybody want a piece of this?” Lana responds with her trademark “Nooooooooooooope.” Can’t imagine why.

This episode is a great example of why Archer is one of the best comedies on TV. It has ridiculous humor, creates its own inside jokes and like any good show, it fleshes out its characters. A lot of shows give you details on the main character and maybe one or two others and everyone else is just there to fill the screen. You have a cartoon here and you feel like you might actually see these people on the street. When this DVD hits stores, you are doing yourself a disservice if you don’t buy it.