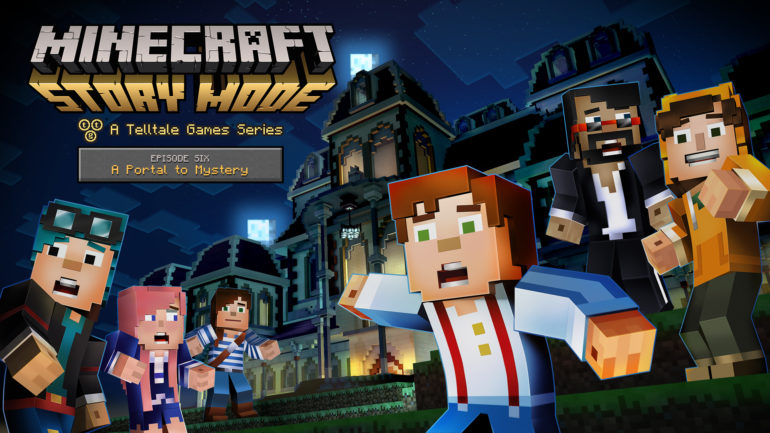 Minecraft: Story Mode might just turn out to be the most successful of Telltale Games‘ stories. Originally slated of only five episodes, the fans just could not get enough of Jessie and his (or her) crew. The loss of Reuben at the conclusion of the Wither Storm storyline was tough and unexpected, but his sacrifice opened doors for The Order of the Stone. Compared to most Telltale Games, Minecraft: Story Mode is extremely lighthearted. The fact that Telltale was unafraid to take risks with their main characters must have instilled faith in the story. Now the Order are on a whole new adventure and fans cannot wait to see where they end up next. On deck we have “A Portal to Mystery,” Episode Six of our story.

A quick note to Season Pass owners. Minecraft: Story Mode was really only meant to have five episodes and thus the Season Pass will only allow you to download episodes one through five. There is a new “Adventure pass” which includes the final three. You can also opt to buy the episodes individually as they release.

This is a complete play through of episode six and it contains spoilers.

THE (NOT-SO) GREAT PUMPKIN When we last left The Order of the Stone they had saved the people of Sky City and thought that they were headed home. Unfortunately, they failed to realize that the portal that brought them to the new land is not the same one they used as an exit. Now Jesse, Ivor, Lukas and Petra are in a dark world with two moons. . . surrounded by hundreds of zombies! A strange book invites them to a mansion on a hill. While the mansion offers safety from the undead, a new threat emerges. The Order meet seven people who seem vaguely familiar with one another. Fans of the original Minecraft game may be familiar with a few of them as well. Five famous Minecraft YouTubers special guest star in this episode and they are:

Much like our heroes, they are all trapped in this world and are now trapped in this house with a mysterious killer named The White Pumpkin. Surrounded on all sides by zombies, there is no way out of the mansion. The Order and their new allies must find out the identity of the killer before they all fall victim.

I liked the overall first story arc of the game but this episode is easily the best yet. I will not say too much because I do not want ot spoi it for those that want to experience it themselves. Just know that if you have been playing the game faithfully you are in for a real treat whether you are familiar with the guest stars or not.

PUMPKIN'S GONNA CARVE YOU! Episode six really stands out in the series. It might be because this episode has guest stars or it might be the fact that they want to entice customers to buy a second season pass. Whatever the reason, The action was turned up in “A Portal to Mystery,” even by comparison to episode five. Fighting the zombie horde was very awesome, as were the duels later on. The pacing was about as close to perfect as you can get in this story. Despite this being one of if not the longest episode, it never felt like it was dragging. The conversational sections were brief and the action keeps you on your toes, wanting more. I know I am not the only one that loves when there is crafting in the game, especially real Minecraft players who can use their recipe knowledge. I can only hope that the final two episodes use a similar formula to make the gameplay even more enjoyable.

THE BEAUTIFUL PEOPLE When it comes to graphics, we have to remember that this is Minecraft. Terminology like “mind-numbing” or “breathtaking” are not going to be used to describe the visuals. Regardless, it looks a lot better than the original Minecraft. Telltale has definitely improved the animation since the story began as well. I think the action scenes of this episode may have been slightly clunky were they using the Telltale engine as it was back then. Previous episode used a lot of slow motion for action scenes and here things just progressed naturally with a solid framerate. The music was also a big selling point for me on this installment. Antimo and Welles did a fantastic job of giving the episode a bit of a “Scooby-Doo mystery” feel with the music they composed. Whatever lies ahead for our heroes, A Portal to Mystery has set the bar pretty high on all levels.

I have a lot of fun playing Minecraft: Story Mode. Not only do I get to share the experience with viewers of the SlickStream live, the characters know how to not take things too seriously. This keeps fun in the story, even when things are looking grim for the Order. Episode six shows a distinct improvement in the storytelling. It is not that the Wither Storm story was bad by any means, just that now there are stories within stories. The Order are experiencing individual adventures in each episode while trying to make it back home. This helps broaden the appeal of the story to adult gamers. One of the guests of this episode said that this is not a Minecraft story; it is a tale that uses the Minecraft universe as a backdrop. I could not agree more. As Telltale continues to evolve the personalities of the order, the appeal of Minecraft: Story Mode widens exponentially. This is an adventure not to be missed.