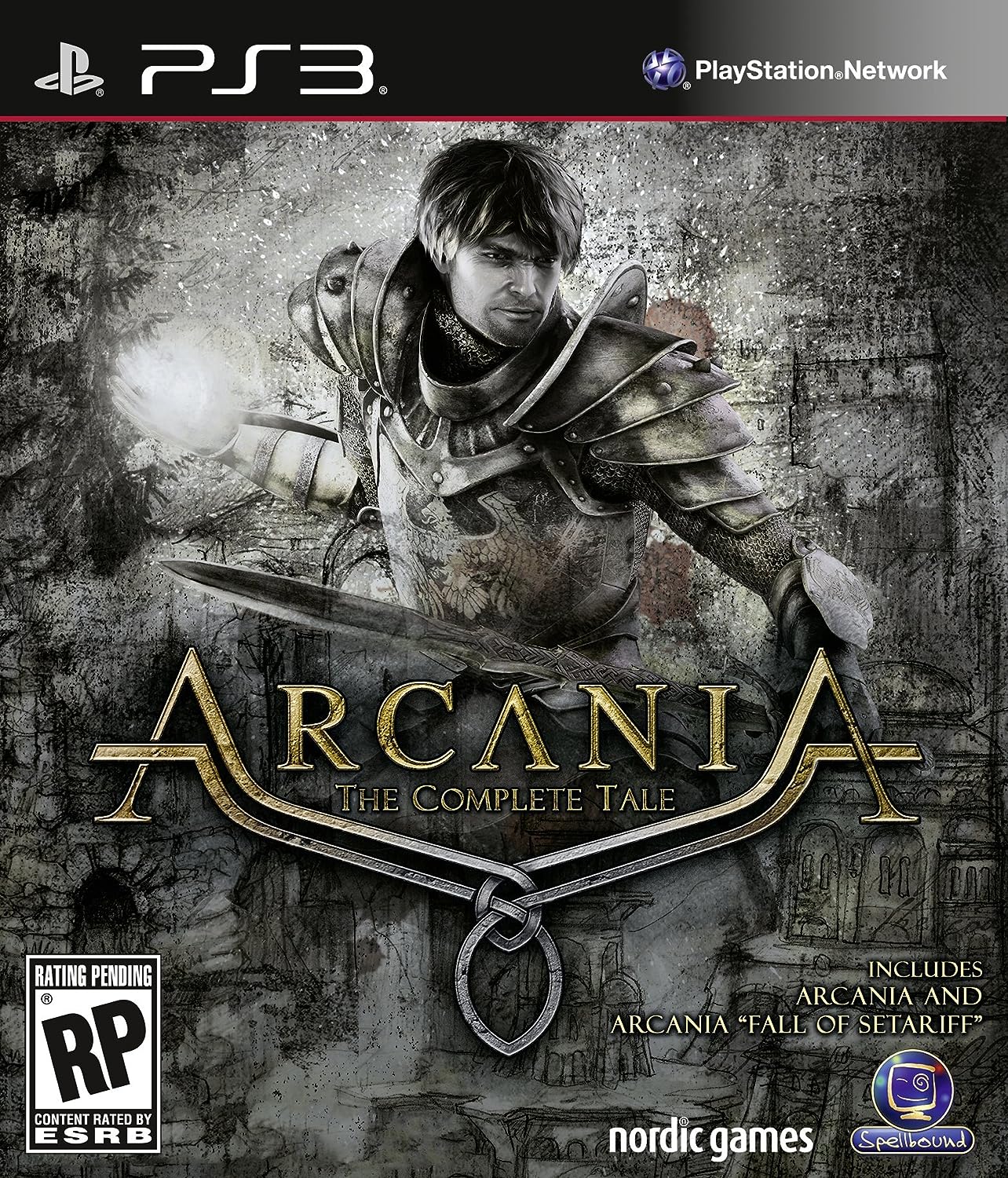 The Gothic series has been a favorite of PC gamers for over ten years. While not receiving the very highest of reviews, the trilogy of games and their additional quests have been enjoyed worldwide. One would have thought that the fourth installment would have received the same love from fans. However, due to changes in the gameplay that made the Gothic IV more accessible to new players, long time fans did not like it as much. Many did not even consider it to be a true Gothic sequel and were happy when “Gothic” was eventually dropped from the game’s title. Now known as simply ArcaniA, the game faced an uphill battle on the PC. Several delays along with mixed reviews made many of the series’ fans pass over the game. Porting the game to the Xbox 360 did little to draw in any new fans. Now Nordic Games has brought the title along with the standalone expansion “The Fall of Setariff” to the PlayStation 3. Almost three years after the initial release, some might wonder why the effort was even made. I hope to provide an answer in this review.

HI! MY NAME IS…WHO? MY NAME IS…WHAT? Once upon a time, quite long ago, the people of Feshyr wore pajamas and lived life slow. On the island, you play the role of a nameless shepherd who is deeply in love with a huntress named Ivy. You obtain her father’s blessing and she agrees to marry you – convenient, since you have recently knocked her up. Just when you think your story would be over, you return home from an errand to find everything you know and love dead and burned to the ground. Of course you swear revenge because shepherds are notorious badasses. In all honesty, this is about as deep as the story gets. There are cut scenes that tell of a war between demons and angels, cults following three different gods (about the only link to previous titles) and this huge war that you seem completely unable to catch up to. I get why the game is called ArcaniA; the world the main character lives in is full of magic and goes from one extreme to the next. There is more to the story than what I have detailed here, but even if you lay out the entire tale, it still just adds up to a quest for revenge that immediately becomes one random fetch quest after another.

YIKES, AND AWAY! ArcaniA has a mildly complex battle system that allows the player a lot of customization. You really can play the way that you want to. You can be a battle hardened knight, a skilled archer or a powerful mage. You can also interchange these abilities by powering up the attributes that you choose to use most. On paper, that sounds great and I give credit to the game for giving players freedom of choice. The problem is that none of this matters; if you beef up your attack and defense and find a good weapon with an added effect like setting enemies on fire, you can pretty much run through the whole game shouting “LEROYYYYYYYYYYYYYYYYYYYYYY JENKINS!” with little resistance. The only time you need any “strategy” is when you come up against large groups of enemies or a single enemy with ridiculously high hit points. This is where the gameplay just gets stupid, and I mean that literally. I came up against a giant troll at one point in the game. Literally, it took up most of the screen. I found myself running for my life because the troll hit really hard and I had nowhere near enough restoratives to keep up with it. So I am getting in my hits while retreating and all of the sudden, the troll just gives up and returns to the area where I first encountered it. So I run after it and absolutely cannot get its attention until it is back at its starting location. Then it chases me again until it feels it has gone too far and again returns once more. You figure something that is catching arrows in its face is not going to just turn tail like its mommy called it home for dinner. There are instances like that all throughout the game. I thought I was done one time because I walked into a room in a dungeon where like 12 undead soldiers woke up at once. Just kept running away and picked them off as they went back to the room. It is sad too, because playing the game you can see the potential that it has. Up your archery skill enough and you can become an expert sniper pretty much. Or up your sneaking skill and you can pretty much stealth kill at least one enemy. I wish I could say that brain dead AI is the worst part, but it get worse.

SCISSORS READY? TIME TO CLIP! Where to start when talking about this game’s graphics; I honestly have to think about that for a moment. Let’s take one of the most poorly rated PlayStation 3 games ever, Lair. Go look at a YouTube video of that 2007 suck fest. Even that game, made over three years before ArcaniA originally was, looks and runs better than the PS3 version of this game. This is what pissed me off the most playing this game. I watched videos of this game being run on PC. It was fraught with glitches, but it was decent looking. The PlayStation 3 is more than capable of reproducing the graphical quality seen in the PC version of the game. The problem is that the developers made zero effort to optimize the game during the port. As a result of sheer laziness, we get a game with more technical problems than a bad PS2 game. There is no excuse for the game struggling to render clothing, armor and even faces during a conversation. And it happens every single time that you start a conversation. You can be walking along the countryside and all of the sudden the game gives you a load screen – and I don’t mean because you entered a cave or dungeon or even a town. You get a load screen for passing a tree in the middle of nowhere. Combat is an extra special moment for the game to release its bowels on you. There’s a beast in the game called a minecrawler; it is sort of a mix between a giant crab and a giant ant and to makes things worse, it has a slightly humanoid face. It is a horrendous thing to run into and it can take a decent amount of damage regardless of your level. Not something you wanna run into in the best of conditions. So I am in a narrow tunnel and run into three of them, all warrior class (roughly twice as tough as the worker class). My weapon has a stun effect, so I can keep them at bay as long as I dodge away after hitting them. That works very well until one of them suddenly teleports behind me, blocking my escape. Did I mention that these creature do not have teleport capabilities? Combine that with occasionally falling into the solid floor and this game is super happy fun time. The music in the game is nothing to write home about, but it is fitting for the tone of the game. However, if you don’t like it, don’t worry about turning your sound down because the music frequently cuts out mysteriously, sometimes for hours at a time. If there was any quality assurance team on this version of the game, they should be ashamed of themselves.

Let me be blunt and say that ArcaniA: The Complete Tale for the PlayStation 3 is like the average guest on the Jerry Springer Show; that is to say, a hot mess. I enjoyed playing the game for what it was – a repetitive fetch quest full of hack and slash and bad dialogue. Had the technical issues been corrected before releasing it, I would tell people to buy it. The main character is an idiot, but it is funny watching him go through the motions. You can see that as the game wears on that even he gets tired of being sent on errand after errand, and I found that to be amusing. Watching people challenge him as if they remotely stood a chance was also a high point for me because it was like watching minion A challenge Son Goku. Unfortunately, the fun is frequently interrupted by the constant technical issues. My confusion is high regarding the production of this port. The PC version looks infinitely better and there is no reason that the PS3 version could not have looked that good. Even the Xbox 360 version suffers from these drawbacks and that has been out for a while now. You can tell something was amiss at Nordic Games with regard to ArcaniA because at first this version was supposed to come out in May and then July. It finally releases at the end of August and the game that was originally priced on Amazon and Best Buy for $60 is now only $29.99. It seems that someone realized that gamers are not complete idiots and that half-assed effort is not rewarded with full retail price sales. Seeing that it is half price now, I am honestly still iffy about telling people to buy it, but I feel that fans of the action RPG genre should definitely play it. With all the heat I have given it, ArcaniA is enjoyable for what it is. The problem is that anyone can see the game could have been so much more.