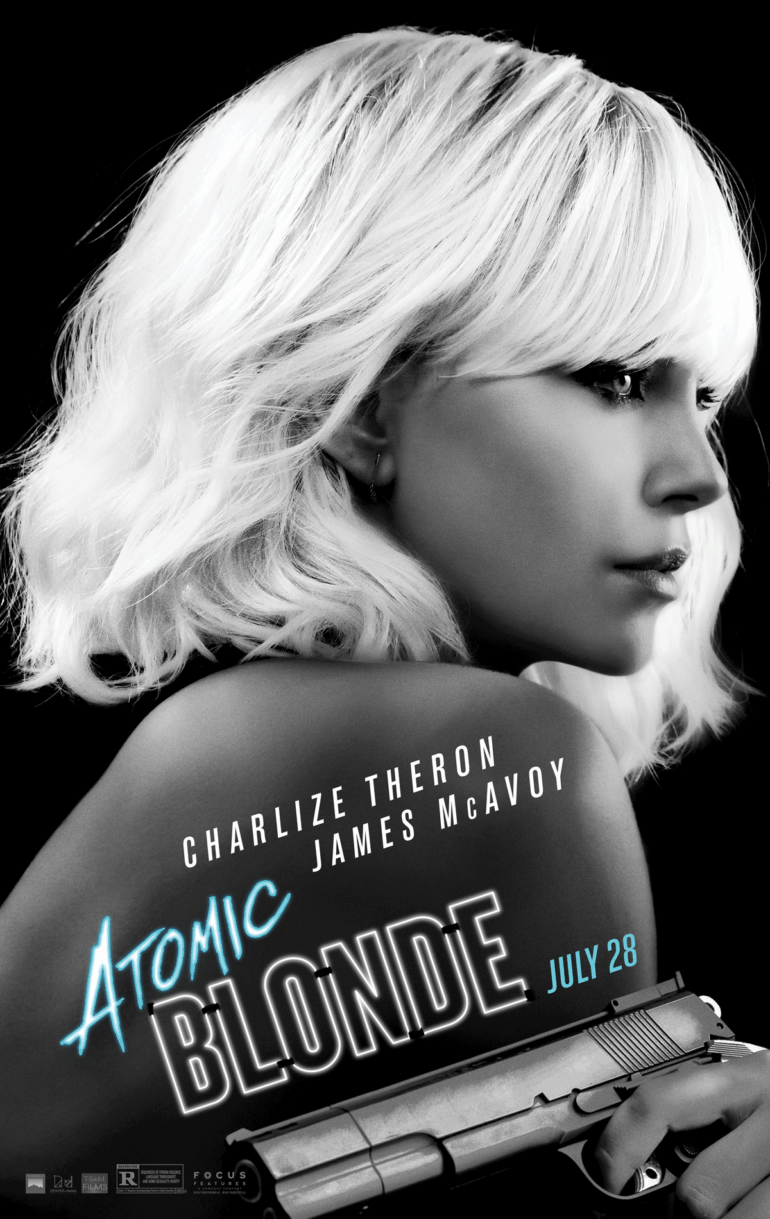 1989! A number, another summer (get down!). . . and that is all the Public Enemy I am going to insert into this piece. During the year 1989, while we the U.S strove to Do the Right Thing, the (then) divided city of Berlin was fed up with all that was wrong. In the midst of it all, the Berlin Wall came down and the Cold War was coming to an end. Atomic Blonde takes place in the midst of this history yet stresses that it is a separate story.

It is not just because of the time period of the story, Atomic Blonde screams of the 1980s. When a movie starts with neon, spray paint and Cat People by David Bowie, the audience is about to take a huge nostalgia trip. To put things in perspective, this movie is more eighties than Grand Theft Auto: Vice City.

In Atomic Blonde, Charlize Theron is Lorraine Broughton, an MI6 agent sent to Berlin to recover a list of secret agent identities. Her former partner, James Gasciogne (Sam Hargrave) was murdered for the list. She travels to Berlin with the cover that she is retrieving the body for his grieving father. This is a standard-faire story about espionage; expect no surprises in terms of story.

What makes the story work is the presentation. Like many movies before it, Atomic Blonde is mostly told past-tense. This leads to a lot of cuts between Berlin and a debriefing room in London. A relatively dark movie blends moments of humor, action and um. . . intense passion. Despite having a rather basic, predictable plot, it is one that needs to be experienced. 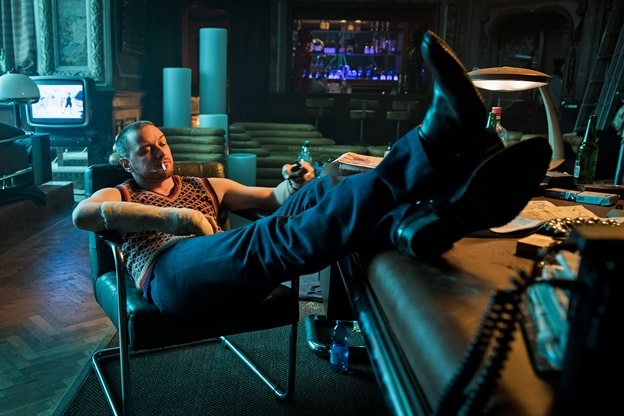 Charlize Theron owned this movie. I have mentioned that the story as presented was nothing to write home about. The reason why Atomic Blonde works is because Theron had outstanding chemistry with everyone. Whether it be dialogue or physical interaction, director David Leitch made sure things meshed properly.

James McAvoy‘s first interaction with Theron looked like something out of the movie Snatch. She tries to shoot him when he was simply trying to return her red heel. Throughout the film, the two continue to be a straight man/comedian pairing. The sprinkling in of these comedic moments gave balance to Atomic Blonde.

If you look at the film history of bar scenes, they can lead to a lot of different situations. Sofia Boutella plays Delphine Lasalle, a French spy tailing Broughton. Their two meetings at a bar lead to an intense (non-work) relationship that still pushes the story forward. These two show Reynolds and Baccarin (Deadpool) how it's done. It is not often that you see any pairing go at it like that and sell it so well.

Atomic Blonde does not have a large cast and it makes sure to utilize the actors well. John Goodman has had some impressive parts recently. Despite only being in a fraction of the scenes here, he makes the most of it and once again, Theron works well with him. There are a lot of factors that tie in to make movies today enjoyable. I truly appreciate that in Atomic Blonde, the acting was actually one of them.

The Atomic in the Blonde

This movie is a spy thriller set thirty-two years in the past. As such, there are little in the way of the special effects you come to expect from a summer movie. Instead, what this film gives you are insane fights, gratuitous gunplay and punishing car chases. There are two unnamed stars in Atomic Blonde and the first is the fight choreography.

Before I go any further, I just want to say “OH MY GOD, THE ‘FATHER FIGURE' SCENE! there, I just really needed to get that off of my chest.

Let's face it, the vast majority of us are not spies, probably never met or know one and we have no clue what that life is really like. Even so, you can imagine that a spy is a master of improvisation. Charlize Theron is about 5'10” and 120lbs. In Atomic Blonde she beats the living excrement out of at least a dozen men that all outweigh and outmuscle her. Improvisation is taken to a whole new level and it is highly entertaining. She probably would have hit someone with a kitchen sink were it not attached to the wall.

Atomic Blonde is rated R and very much earns it. I am neither for nor against blood and gore, but (personally) I tire of movies that ignore the fact that blood comes out of people when cut, stabbed or shot. This movie intends to teach cleaning staff what it takes to get brain stains, arterial blood and teeth out of upholstery. It is far from a gorefest, but definitely not for the squeamish. If however, you appreciate hardcore action, you will definitely not be disappointed.

I have discussed several factors that make Atomic Blonde enjoyable. The one that stands above all is what I like to call the Flash Gordon factor. Using music to the point where the film is almost a musical made good scenes great. I am not exaggerating when I say that George Michael (R.I.P.) made a good fight scene into an amazing one. I watched a man get beaten to 99 Luftballoons and saw mean car chase paired with I Ran (So Far Away). Queen have two tracks on this movie's soundtrack which is ironic – they were the very band that made Flash Gordon a cult classic.

It is one thing to watch a good movie with the latest Dolby Atmos system and hear all the explosions and punches. It is something entirely different when you get to experience a film that treats your eyes and ears by matching scenes to good music. Those are the films that stay with you. Don't get me wrong, I am not making Atomic Blonde out to be the end all be all, but I definitely feel that you will enjoy this experience.

Verdict: Do the Curtains Match the Drapes?

As of the publishing of this review, Atomic Blonde is my favorite movie of 2017. That is not to say that it was the best movie of 2017. I am a very cynical individual who will enjoy things and say “it could have been better.” When I mentioned movies that forget that people bleed, I was thinking of Wonder Woman. I highly enjoyed that film but it was lacking when you consider how brutal the titular character is in combat. Atomic Blonde gave me the kind of violence I wanted from the Amazon princess and then some.

Charlize Theron chemistry with her co-stars was another factor in me feeling this was a complete movie. Take Valerian, which I saw last week. Another film I enjoyed, but it felt very dry in terms of chemistry. DeHaan and Delevingne had good chemistry with other members of the cast but together they were like high grit sandpaper. The character interactions in Atomic Blonde were all smooth, like the Stoli vodka Theron was drinking the entire movie.

The bottom line is I walked out of the theater feeling this is how movies should be made. Not only was the film set in 1989, it resembled how films were made in the past. Today, a lot of directors lean on crutches like explosions and insane visual effects. While there is nothing wrong with those things, by themselves they do not make a good film. Atomic Blonde fills in all of these blanks. While it does not get everything right, it scores high enough where anyone (18 and over) can enjoy this movie. 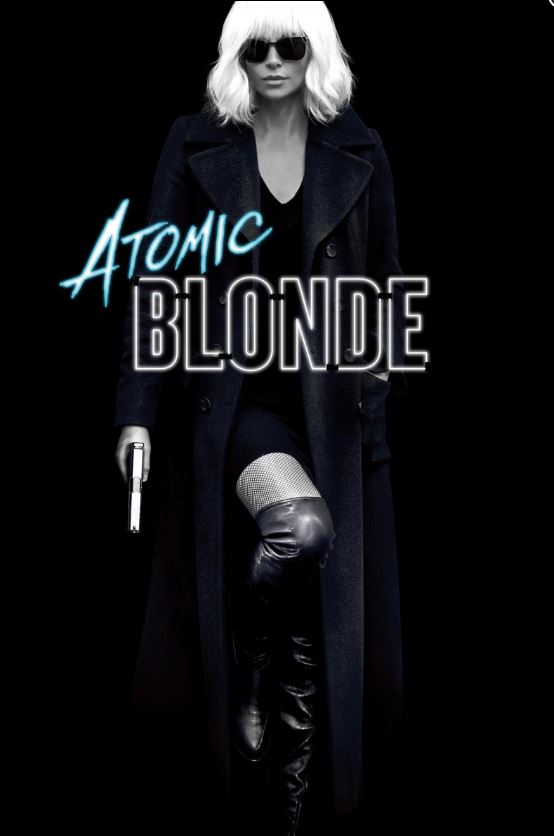