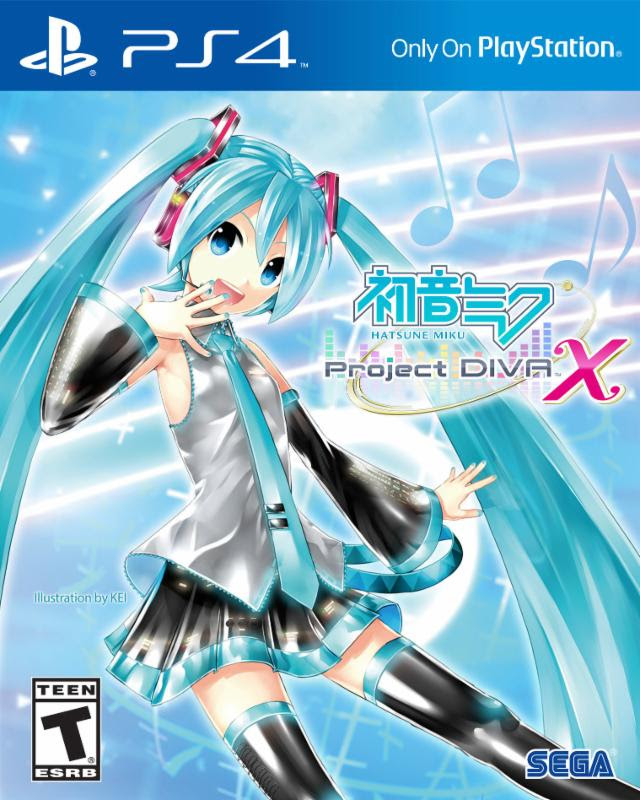 The Japanese idol phenomena has seen differing periods of prosperity over the past forty years. One thing has always been prevalent: the image of young, pretty individuals that could be inserted into nearly every aspect of commercial society. For this reason, the individual idol generally only enjoys a few years of fame. Once they hit a certain age, the crowd is looking for the next big (younger) thing. The answer to this became the vocaloid; a computer generated idol that never aged. One of the most famous came from Crypton Future Media. Hatsune Miku (Miku Hatsune) would sing whatever you programmed her to and she just hit her ninth year of fame. To celebrate, a new game came out from Sega titled Hatsune Miku: Project Diva X. The digital idol is about to literally put the power of music in your hands!

TASUKETE! Hatsune Miku: Project Diva X is a rhythm game, but our titular character is somewhat of a damsel in distress. From the game's start, Miku breaks the fourth wall and tells you that she exists with her friends inside the game. She asks for your help because their songs are what power the world they live in and they are powerless to sing without your help. When you accept her request for help she thanks you as her hero and explains your task. There are five clouds that make up her world. They are cute, cool, elegant, quirky and classic. The world of the vocaloid is that of the Japanese idol which means that appearance is as, if not more important than performance. You must combine a certain look with her song in order to restore the clouds to their full power.

WHERE'S MY DANCE PAD? I highly recommend that you do not skip the tutorial. The controls to the game are relatively simple, but learning how they flow and mesh together is not easy without a demonstration. Besides that, newcomers will pretty much instantly be sold on Hatsune Miku after hearing her sing Levan Polkka. Your entry point into Miku's world is the Classic cloud. The classic cloud will introduce you to the other vocaloids that Hatsune Miku will perform with: sibling duo Kagamine Rin and Len, Megurine Luka, KAITO V3 and MEIKO V3. After clearing the classic cloud, you will gain the ability to change the main performer and set backup singers. Not every song has backup, but the final song in a cloud will always have multiple performers. To complete a song you must match the button icons that float all over the screen. Hand-eye coordination is important from the start and this is where the tutorial becomes important. The first song, appropriately titled “The First Sound” is not easy. It is also not the most difficult song in the cloud. Here is a sample of what the first cloud has in store:

This is one of the “easy” songs in the game. It is also a personal favorite. The controls get increasingly difficult as you proceed. There are even multiple levels of difficulty on each song. Easy means you just have to worry about the circle button and either using the left analog or touchpad. anything else means all four buttons may come into play along with combining them with the D-pad. The left analog or touchpad are there as well. As you increase difficulty within the same song, you have to hit more notes and beats in time with the on screen icons. Songs have anywhere from one to several hundred beats per minute; please take breaks as necessary to avoid repetitive stress injury (not kidding).

Your reward for matching the button presses and finger swipes properly are new modules (costumes) and new songs to sing. You also receive items that enhance your costumes and can be given as gifts to the other vocaloids. Fortunately, the controls are super responsive and it is only your hand eye coordination (or lack thereof) that will cause you to miss. Without the benefit of a dance pad, Hatsune Miku: Project DIVA X is like playing a bullet hell shooter with slightly less stress. I mainly recommend this to the “experts” who have been “Through the Fire and Flames.”

TENSHI!! Hatsune Miku: Project DIVA X is not pushing the graphical capability of the PS4 by any means. Despite that, it will stand out as one of the more beautiful games on the system due to its presentation. The same way I mentioned that presentation is almost more important than talent for real life idols, Sega put a lot of thought and work into making this game “look” good. On each stage, Miku and friends will dance their digital hearts out. They only depend upon you for their voices, so their choreography is flawless. Each stage has its own theme; some will stand out to you more than others. It is a shame that you are not able to replay your performance. When you are watching the button presses fly across the screen, it is hard to enjoy things like this:

You do not need to understand Japanese to play this game, you just need an appreciation of music. Some o the songs will make your heads spin, but that is only because your hands and eyes are trying to keep up with everything. If you are recording your gameplay either for YouTube or just to review your own progress, you will find yourself laughing and just staring in wonderment. I am a big anime fan that sees idols dance and sing all the time yet I was still blown away by how attached I became to the music and some of the characters. Don't be afraid to get sucked in by this game.

We cannot all be as fabulous as Kaito, but Miku is grateful for our help regardless. Hatsune Miku: Project DIVA X will provide hours upon hours of entertainment as you strive to unlock all modules and max the friendship of all the vocaloids. Even when you have accomplished that, it is a great party game alternative to karaoke. Friends can see who can get the highest score on a song. There is a lot to do and even more to love in this game. Despite the teen rating, I would say it is a great family game because it can provide fun for a full room and even has mild educational value. Smaller children can learn coordination from this game that will not only help them with video games as they grow but also with real life. Parents can lose their minds as they fail miserably because their children dance in front of the screen, making them miss notes. This type of game has the most value in households with multiple residents, but even single residence units can have fun here. I was reluctant to review the game at first because of foolish man pride and the fact that I stink at rhythm games. I am glad that I gave it a shot because this is a game that anyone who doesn't have carpal tunnel syndrome or arthritic hands can enjoy. By the way, I still stink at rhythm games, but I still love listening to the music and improving over time. I also realized that I own the following games:

All of these are good games as well, but considering their gameplay and content, you realize that I am way past caring what people think of my choice in gaming. If you are looking for a fun (and for once wholesome) title, then you will not care either.