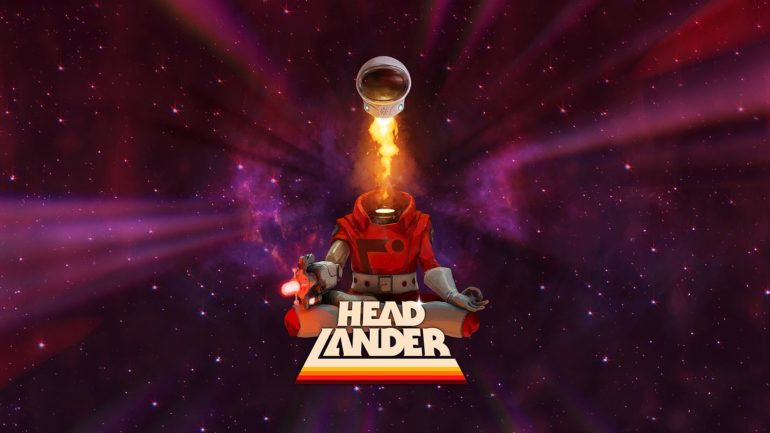 Headlander is being published by Adult Swim Games. The moment that you see “Adult Swim” stamped on anything, you know that it is going to be out of the ordinary. As a long time gamer, I have a arcade-style itch that needs to be scratched once in a while. As a fan of Adult Swim, I gotta check out weird stuff; especially if they are going to put their brand on it. Headlander satisfies both of these categories so I figured what the hell. Let's break this game down and see if it is worth a Robot Chicken sketch.

GETTING A(HEAD) IN LIFE It is one of those days where you wake up from a deep sleep and cannot remember whether it's Thursday or November. You know, those days where you wake up and have to wipe crust from both your eyes and your mouth. There is just one problem here: Where are my hands? Where is my body!? The opening of Headlander comes as a shock to your nameless character. You no longer have lungs, so you cannot talk and your head is confined to a space mask so no one would hear you if you could. If that were the worst of things, you could live with it. After all, you are already a miracle of science. Unfortunately, there is an AI called Methuselah that is bent on subjugating the minds of humanity in completely robot bodies. Your organic head is a bump in that plan.

Thankfully, Earl leads a rebellion against Methuselah. He is a voice in your helmet and says that he leads a group of flesh and blood humans that want to stop Methuselah once and for all. he needs you to act from within Yourtopia to make that happen. Inside, you thankfully have the assistance of Crystal-9 and her commando squad of rebel robots or you would be completely on your own. Your goal is to stop Methuselah so that humanity can return to its flesh and blood roots. Good luck, Headlander.

HEAD FOR THE HILLS The road to freedom is never an easy path. In Headlander, the lack of having a body makes that path much harder to travel. However, as the hero, you are not without your devices. Earl gets you started with a body and guides you to your first few upgrades. he also gives you objectives which will ultimately bring about Methuselah's end. It is up to you to find your power-ups and helmet upgrades like rocket boost, shields and suction power. Suction Power might be your greatest offensive weapon because you will often find yourself in unfair firefights. Your body will get destroyed leaving your head vulnerable. You can suck the head (yikes) off another robot body and take up residence. This leads you to stronger frames that have stronger weapons, access to certain doors and the ability to go where other bodies cannot. There is also the fact that each body has its own funky dance moves.

If you are asking what about Headlander's gameplay is so special, it will depend upon how versed your gaming history is. Outside of titles like Mario and Metroid, one of the greatest arcade-style platformers ever was an NES game called Goonies II. If you are ever on an emulator or actually have that classic box, get your hands on that game if you can. Headlander reminds me of what Goonies II would potentially be in 2016. Having to deal with scores of enemies on the main screens and then searching corridors for special items are styles these games share. The head mechanic of the game really makes it stand out from other indie titles as you suddenly add puzzle elements. Sometimes you have to figure out just how to get to a head section and then work your way through mazes of lasers and other traps. Keeping track of hidden areas is easy with the map as it color codes areas to show you where you have not yet been. The overall gameplay of Headlander is simple, but there are some degrees of complexity for those who need a bit more from the game.

NICE HEAD! Headlander has an intentionally retro look. Robots rolling around on shag carpets and getting freaky with what looks like lava lamp oil are just a few of the sights you will experience. The game is set in the type of future you would see in a bad, late-night 70s B-movie and the dialogue of the NPCs matches. Double Fine Productions creates a game world that mixes The Black Hole with Austin Powers and makes it work. The colors are vibrant without being overpowering and both the graphics and animation are solid. There is no slowdown when a lot of characters are on screen. The music is everything that you would expect from a Flash Gordon movie that could not afford legends like Queen. As much as that translates to cheesy music, it still equals awesome. Give the high school A/V department a budget raise cuz they knocked this one out the park!

Headlander is a trippy adventure that takes players back to a simpler age of both gaming and movies. The age where lasers solved everything and no one had silly super powers. No one was psychic or teleporting all over the place! Ain't nobody got time for that! I was drawn in by the initial trailer for headlander, but I was ill prepared for what the actual game entailed. A solid story of pure nonsense about a struggle against an all-controlling AI. A society of mind controlled people that have given up their physical humanity. Shag carpets, the moonwalk and breakdancing. All of this envelops a well-designed platformer that both standard players and speed runners can enjoy. Considering its connection to 70s and 80s movie culture, I would not be surprised if a Headlander II popped up next year (hint hint). This is another situation where you can spend one-third the price of a gmae and get full enjoyment out of it. I recommend that everyone with a PS4 or Steam account get this game. You will not be disappointed.