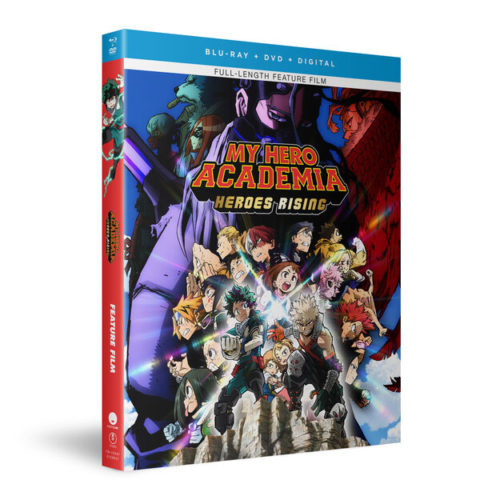 My Hero Academia is one of the best shōnen anime of this decade and arguably of all time. If this is your first foray into the series, just know the entire series is a flashback. Deku (Izuku Midoriya) tells of how he became the number one hero. Born “quirkless” (without powers), he was gifted the All for One ability by All Might, the previous top hero. The story tells how he learned to properly utilize this power and become a hero who saves everyone with a smile. Heroes Rising is the second feature film of the franchise. Don't worry; the story is not canon and does not require you to be up to date to enjoy it.

Shades of the Past

After Endeavor destroys an armored truck stolen by the League of Villains, an unknown figure emerges. Reports begin to surface of heroes having their quirks stolen, and there are zero clues. Meanwhile, Class 1-A of Ultra Academy gets their biggest assignment to date. The class takes up residency on the peaceful and hero-deficient Nabu Island. With a population of one thousand, they are tasked with maintaining peace. All goes well as the students perform daily tasks and respond to citizen reports. A bond is quickly formed as the young heroes endear themselves to the island residents.

While helping the town, Deku meets siblings Mahoro and Katsuma Shimano. Mahoro feels Class 1-A is useless, but Katsuma looks up to Deku. Mahoro wants to prove to her little brother that heroes are not all that. She sets up fake emergencies that Deku (and later Bakuo) respond to. The “wolf” becomes real when four powerful villains come to Nabu Island. They immediately cut communication lines and proceed to decimate our heroes. With no real hope of help, Deku and friends must protect the citizens. Find out why Katsuma is the villains' target and how far both sides will go to achieve their goals.

My Hero Academia has managed to maintain a standard in animation through its (current) four seasons. This is due to the work of production company Bones. They are known for anime like Fullmetal Alchemist, Bungou Stray Dogs, and Carole & Tuesday. Known for faithful recreations of the original (manga) art, they also are known for high-quality action scenes. This shines in Heroes Rising from start to finish. In particular, the Todoroki vs. Chimera and Tokoyami vs. Slice fights stand out. I did not mention the “big fight” because that should obviously pop the most. Take a peek at it here courtesy of FUNimation.

A lot of people know that when it comes to anime, I am a “sub.” I prefer to hear the original dialogue and read subtitles for reasons we will save for another discussion. The review stream provided by FUNimation (thank you) is the dub. I have to say that Justin Briner (Deku) and Clifford Chapin (Bakugo) worked well together. They properly captured the tension between the two students. Greg Dulcie, as Chimera, was probably the standout for me. His gruff voice fits the character perfectly. In fact, the only voice I personally dislike is Brina Palencia's portrayal of Mineta. Pop-Off is one of my favorites, and I keep asking why he has to have a speech impediment in English. In all, this is one of the better dubs in anime today. You did not even have to twist my arm (much) for me to remain objective.

VERDICT: My Hero Academia – Did the Heroes Rise?

This will sound odd, but I feel like this movie is best enjoyed by those who are not fans of My Hero Academia. It is by no means a bad anime feature. The problem lies in the story. For one, at 104 minutes, it is a bit long for what it is trying to tell. There was a lot of time spent on the Shimano siblings. They are integral to the plot, but the story does not really make you care about them. Katsuma has a moment in the end, but there was no real lead up to it.

U.A. Class 1-A, for the most part, does not shine either. In terms of fighting, the stars were Dark Shadow and Shoto. Deku and Bakugo got their butts kicked the whole time, and the resolution to that made no real sense. I cannot expand on that without spoiling. While this movie is considered outside of the main canon, Deku breaking his arm is contradictory to his character development. They manage to explain away his battle choices, but it really feels like a cop-out.

Finally, there are the villains. Slice and her hair-based powers made for a great “mid-card” fight with Dark Shadow. Chimera was really the stand-out villain, in my opinion. The little bit of backstory we got let us know why he fights, and he really sold the fight with Shoto and company. Mummy was mummy, a throwaway villain that went down fairly easy. I could not really get into Nine, however. All for One will remain a constant in the story, but Nine felt recycled. He was also too overpowered for this story. There is much suspension of disbelief in anime, but Deku and Bakugo beating him go way past that.

As a fan of the series, I found myself scratching my head at the end. This is why I say that non-fans may enjoy this more. If you can sit down and enjoy the action of an anime film, My Hero Academia: Heroes Rising will go over better for you. Everyone else should look forward to the new season next year.