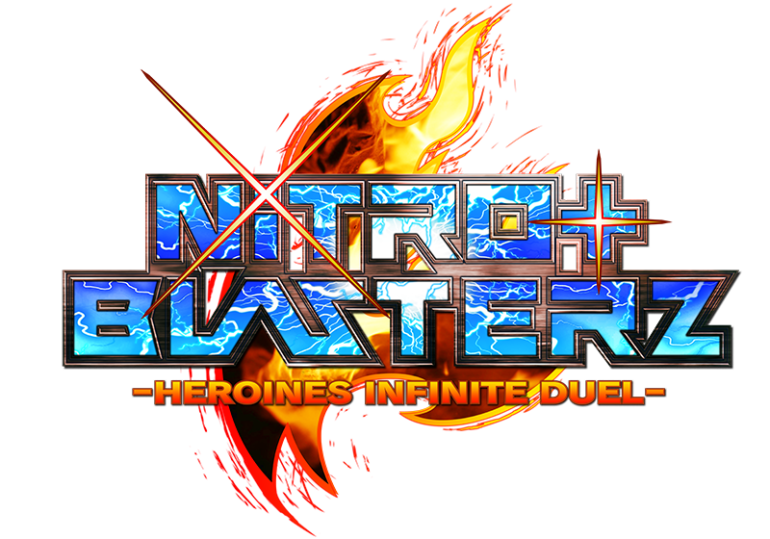 Nitroplus Blasterz -Heroines Infinite Duel- is the latest in the line of character compilation brawlers from Examu. If that name does not ring a bell, they are the company that created the Arcana Heart series and the more recent Aquapazza: Aquaplus Dream Match. If you spend any amount of time online you have probably seen posts asking which character from comics, anime, etc. would beat the other in a fight. Games like Nitroplus Blasterz give you the chance to answer that firsthand. The difference is that Examu tends to take mostly if not all female characters. Also, the rosters they compile for games are not necessarily full of those that actually fight. Characters like Nitroplus mascot Super Sonico and Yuki Takeya from “Gakkō Gurashi!” (School Live!) are not known for their fisticuffs in their respective media. That is part of the charm of these titles. If you're sitting there scratching your head wondering what a girl who talks to her dead teacher all day and a gravure model with five cats is going to do in battle, just stop. It's best to not even try comprehending such things. Sit back, relax and rest assured that in making Nitroplus Blasterz -Heroines Infinite Duel- no cats were harmed.

Yes, she attacks with her cats.

TELL ME ‘ANOTHER STORY' I thought about how to explain this story. For comparison, I thought about every story I could remember that involved combining characters of different worlds, universes, etc. The common factor is always some form of dimensional breakdown for whatever reason. Guess what happens in Nitroplus Blasterz -Heroines Infinite Duel-? The official story says that an ancient entity wakes up and she basically is bored. She breaks down dimensional barriers and intertwines realities in the hopes that a warrior can be found. She is looking for someone strong enough to entertain her and convince her that destroying the multiverse is a bad idea. You say that sounds utterly ridiculous? Wait until you see the conversations between characters. Something is definitely lost in translation. I get the feeling that Examu said to themselves “people are gonna skip the story bits” and  just played it by ear. Once you beat Miss “bored little lady boss,” you unlock “Another Story” mode. If you can make sense of these explanations of the story modes then I might just hire a flash mob to give you a standing ovation. Fortunately, while the story aspect of story mode is *ahem* there, story mode itself is engaging. To clear the complete story with even one character will take you a good hour or so; learning everyone will definitely take some time. You have twelve main characters to choose from and PSN currently allows you to download the bonus characters “Aino Heart” and “Homura” for free. If you are an anime fan, here is the full playable and support roster for the game. If you notice that Super Sonico overlaps it is because the game was originally an arcade release and she was not playable until the console version. Bottom line is that if you ignore the plot and focus on the amount of variety, you will make it through and probably have a good time.

Something looks obscene about this. . . but it's great!

I MISS SFA3 BISON The aforementioned story mode is broken up into two parts: main and another story mode. Together they offer up a total of seventeen best of three round fights. The difficulty goes from super easy to “oh my goodness I wanna strangle the people that made this game” hard. Depending upon how competitive you are you can set the difficulty accordingly. The final boss is a semi-original character based upon Al Azif from the Demonbane series. A little on “Al Azif Ex Mortis.” She just might be the cheesiest fighting game boss I have ever experienced. Fight aficionados will get my Alpha 3 reference because that version of M. Bison is horrifically cheesy. The difference is that what he does seems humanly possible. This is not the case with Al Azif Ex Mortis. Disappearing behind you before you even get next to her; projectiles so large you have to be at the peak of your jump to dodge and a spike attack that touches the top of the screen. These are her normal abilities. When her super meter fills, she creates distortions that fill up most of the screen and explode in your face. Not to mention she pulls a blade from nowhere and hits you so hard you bounce off the ground and that sometimes negates fall recovery. This brings us to her Lethal Blaze attack, which makes the Ultimate Psycho Crusher look like a jab. She creates a black hole that sucks you in (even if you are blocking) at which point you may put your controller down. Multiple curses start to hit you and the screen whites out. When it comes back, you have been hit with an eighty-five hit combo and you are guaranteed dead. I have seen some people dodge this but she has always hit me when I am too close to avoid it. You know you sound mad when you just wrote a whole section of a review on one character. Al Azif Ex Mortis is not impossible to beat, she will just make you go insane during the process. You might do better playing vs mode against your friends. Score Attack is similar to story mode except that your final score is uploaded to an online leaderboard for ranking. You still have to face that dreaded boss. The day they make her playable will make online play a nightmare.

Switching over to online modes, you will be happy to hear that Nitroplus Blasterz -Heroines Infinite Duel- offers plenty of online battle options and has a stable network. You can play ranked or unranked friendly matches and you can set up rooms for your friends. There is also the previously mentioned Score Attack mode which should be called Arcade mode since you are posting a score to rank against others online. You can watch and save replays of matches as well as edit your title. The options are pretty standard fare for a fighting game but it is more than the other fighting game that came out this month.

NOT MY F.A.V. Graphics and sound would be the area where this game needs most work. I know I ran the story through the ringer, but I also said that story in a fighting game is something that is generally ignored. The graphics in this game are not bad at all, they are just extremely dated. If you go to YouTube and look up gameplay from the original Arcana Heart, you will not see much difference. Think about that; Arcana Heart came out as an arcade game in 2006 and was on PS2 in 2008. Yes, you have higher resolution graphics but the overall art style, animation and level design are essentially the same. I get that Examu wants to maintain the anime look of the characters from their respective series, but that does not mean you have to use the same game engine from when some of these stories debuted. The one part of the game that looks up to today's standard is the music video by First Astronomical Velocity (Sonico's group) that plays at the beginning. If the whole game looked like that, there would be no complaints. The same issue lies with the music. This is a brand new game but the music sounds like it was lifted from older titles from the previous decade. When even mobile apps are using real instrumental music the synth loops of this title seem, for lack of a nicer term, lazy. I seriously doubt anyone is searching for the soundtrack to this game.

Thor wants his hammer back.

After reading all of that you might be surprised to hear me say that I really like Nitroplus Blasterz -Heroines Infinite Duel-. First of all, I am a lover of good fighting games and the battle system for this game is highly enjoyable. Even though it is lacking any form of tutorial system that would teach you the ins and outs of the game, NB is easy to pick up and play. The button setup is closer to an SNK-style fighter than Capcom so it might take a short adjustment but you find yourself learning the controls without trying as you play. The characters range from awesome to ridiculous and that is part of what will draw you to this game. Examples like Homura, who holds three katana in between the fingers of each hand and can wield them like claws and Sonico, who uses the actual claws of her five cats as weapons. Add in support characters who do everything from carpet bomb your opponent from orbit to call out her band to buff up your health and special meter. The game is pure madness and that is something from older brawlers that should never be lost. The recently released Street Fighter V takes itself so seriously that it almost completely forgets that fighting games should be fun before anything else. Therein lies the answer to why you would buy this game when you could get Street Fighter V right now and soon get Mortal Kombat XL or King of Fighters XIV. Sure there are times when you want to sit and break down frame data to be the best in the world or rip someone's spine out as you play as your favorite movie monster. Those games should be in your collection as well. However if you just want to sit down and have some fun with friends and maybe drive yourself insane against the new Queen of fighting game cheese then you cannot do better than Nitroplus Blasterz -Heroines Infinite Duel-.