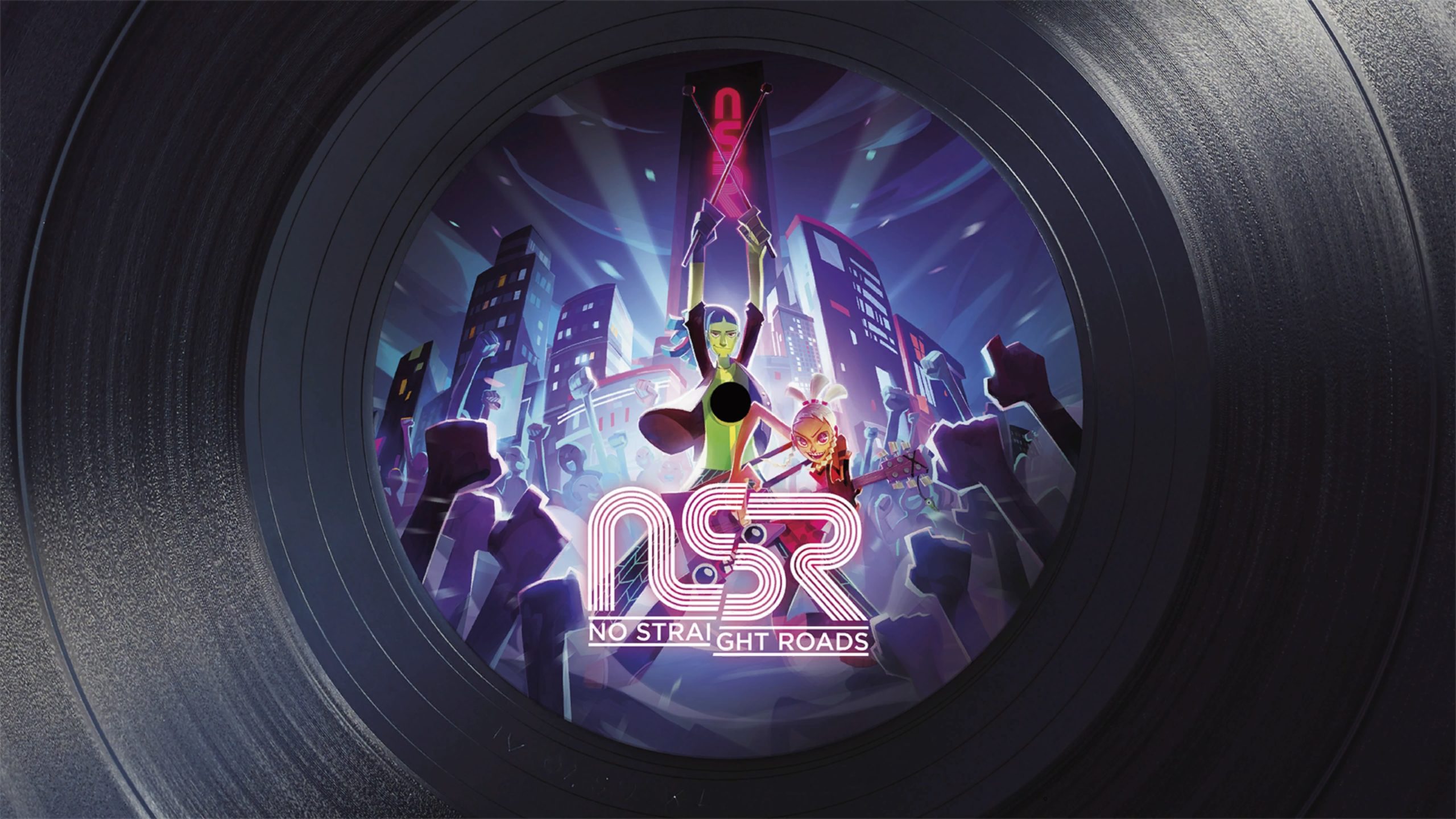 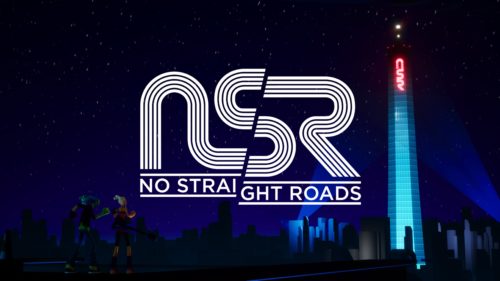 No Straight Roads is the passion project of Malaysian indie developer, Metronomik. This is what happens when you mix the creative minds of Final Fantasy XV and Street Fighter V together. This team's mission statement is to “bring the harmony of music and video games to the masses.” Their aim is to accomplish this without making you play a rhythm game, this being their first attempt. Is the battle to save Vinyl City one you need to support? I will find out before the needle hits the sticker.

The Rise of Rock

No Straight Roads begins with the realization of a dream. Mayday and Zuke have formed Bunk Bed Junction and they just got their chance to break out. ‘Lights Up' Auditions are the game's equivalent of America's Got Talent. After an amazing performance, they are shocked to get Xs from all of the judges. Tatiana, leader of the Musical Megastars, proceeds to berate their musical prowess. Mayday and Zuke argue on their way home over why they got rejected.

During the argument, the duo learns that NSR is an evil EDM empire keeping the common folk oppressed. The only thing to do (according to Mayday) is to bring them down with the power of rock! Their battle begins to take down the Musical Megastars and return Vinyl City to its former glory. Bunk Bed Junction will not rest until the city is free of its EDM tyranny. The story is incredibly cheesy, but it feels really good to play through. If Scott Pilgrim meets Jet Set Radio Future sounds like a good time, this game is likely for you.

Metronomik did a great job of making sure nothing is what you would expect in No Straight Roads. At the same time, nothing is beyond the realm of manageability. You basically are fighting over the top, giant bosses, so there is a Shadow of the Colossus feel. The smaller enemies all attack to the beat of the music and it feels somewhat like Space Channel 5. The overall world is full of vibrant colors, humor and an art style give you Psychonauts vibes. NSR overall is somewhat difficult to describe; you just have to experience it. Follow BBJ's motto and just “bunka, junka and BAM! in their faces.”

Rhythm is a Dancer

This is not a rhythm game, but you can (and often should) combine rhythm into your combat. Enemy attacks have patterns that may not always be easy to see on a first try. The combination of music and action somewhat overwhelms the senses but then you start to hear it and feel it. At that point, beating a boss is just a matter of timing. I get the feeling that I am not the only person that finds themselves “dancing” while beating bosses into submission.

Drummers Get All the Chicks

Bunk Bed Junction is a fighting duo (or trio on Switch) you can tag in and out during fights. The opening is a tutorial teaching you that Mayday has power attacks while Zuke masters speed combos. You swap between them with L1 if you play solo, allowing you to choose between power (May) and speed (Zuke). Beating bosses and claiming their charters gives you mods to improve your combat capability. Replay bosses you did not get S ratings on to maximize your fans. Your fanbase is the “currency” needed to upgrade your abilities. The game is designed to be replayed and you can customize the soundtrack when you return to a boss.

The graphics of No Straight Roads are not going to claim this year's top spot, but they are undeniably pretty. You have a game engine looks like something out of Pixar or Dreamworks. The color palette changes from one zone to the next with a style unlike anything I have seen this year. Daim Dziauddin designed much of the art and his work on SFV shows with exaggerated hands and feet. What continues to look weird in the fighter (to me) looks perfect here. Every time you complete an area you will be excited to see what style comes next.

The unique look of No Straight Roads is punctuated by the dynamic nature of the art. It does not rely entirely on the Unreal Engine to display visuals. During a conversation, characters explode onto the screen in an anime style, letting you know just who they are. Mayday strikes a pose during these conversations just to keep things goofy. Then you have the news reports that take place after a boss battle. These are fully animated ink and paint cartoons used to move the story to its next chapter. Larger titles have used static imagery for cutscenes and you will appreciate how NSR keeps things moving.

There is no exaggeration in saying this game rocks from start to finish. Before you even start to play, you get a taste of how great the music is. The main theme performed by Andy Tunstall is Rock n Roll at its finest. No Straight Roads' soundtrack is an artist collaboration that increases game enjoyment tenfold. You can check it out or download it from Boss Battle Records. Just make sure to stop snapping your fingers long enough to actually beat the Musical Megastars.

A fully-voiced game is something we do not see enough of, regardless of whether a game is indie or mainstream. No Straight Roads' talented voice cast put their hearts into the performance. Su Ling Chan and Steven Bones (Mayday & Zuke) really managed to capture the essence of BBJ's members. Su Ling is volatile, to say the least. I don't know if she was born to be Mayday or vice-versa. Steven nails the laid back persona of Zuke. Priscilla Patrick (Tatiana) is so good at being bad that she reminds me of Kill la Kill's Ragyo Kiryuin. A good performance by voice actors helps the player connect with their character. The talent behind Bunk Bed Junction make them feel like your friends.

VERDICT: Does No Strait Roads Stay on Track?

I usually try to keep everything objective until this point but I think it is obvious how I feel about this game. Truth be told, Metronomik does not reinvent the wheel here, but it does not matter. Way back in 2009, I praised a game for shamelessly stealing ideas and putting a masterpiece together. That game was Batman: Arkham Asylum by the way. NSR takes concepts from games, anime, movies and you name it to make something any gamer can enjoy.

The game by itself is good, but the music and voice acting are what make everything shine. I do not care if it dates me, this game is like playing Flash Gordon – the music is that good. The voice talent make the game feel like more of a cinematic experience. Combine these with the art and animation and Metronomik just created a winner out of nowhere. No Straight Roads unfortunately will not grab game of the year, but everyone should play it. This is by far my number one “must play” game of 2020. I need a sequel yesterday.

No Straight Roads
No Straight Roads is a truly fantastic creation. Music art, color and voice combined to form something special. Do not miss it.
ROCK!
I mean, have you HEARD the music?
Goofy main characters you will love
Solid voice talent and the game is fully-voiced
Exaggerated character models that just fit this story
DID I MENTION THE MUSIC?
EDM
Minor glitches (Devs are actively working on them)
Short
5
Rock & Roll. . . FOREVER!