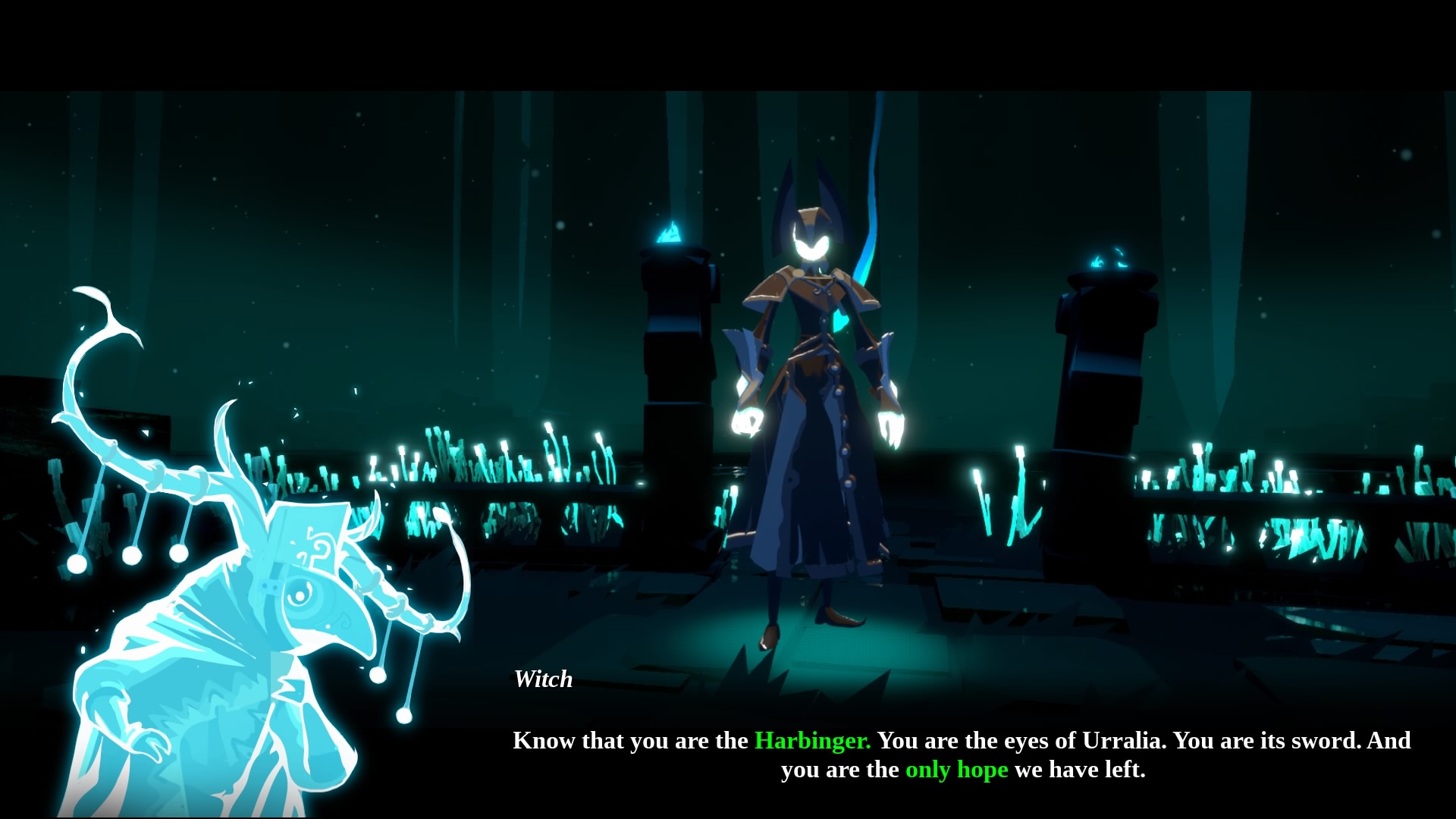 This Path Leads to More Stories…

In 2016, Spearhead Games endeared themselves to me with Stories: The Path of Destinies. This game was an action-RPG reminiscent of Zelda titles. It played like the movie Groundhog Day, such that you had to repeat your mission until you succeeded. The only real gripe I had was that full completion required you to finish the game roughly twenty-seven times. Spearhead now brings us the spiritual successor to Stories. A tale of triumph over evil. Well, it is more like wrestling victory from evil after evil already won. Reynardo now makes way for the Harbinger in the new mystery title, Omensight.

The intro tells the tale of Urralia, a world you have already failed to save. As the Harbinger, your role is to intervene and prevent the end of the world. Minutes into the game you realize you are too late and the horror known as Voden appears.

Fortunately, failure is not the end, for the harbinger exists outside of time. Your connection with the souls of key individuals and a mysterious witch allow you to relive their final day. Prepare to play the most exciting game of Clue in history. The return of Voden was always prevented by the godless priestess. Current priestess Vera is dead and her soul missing; no one capable of keeping Voden in check remains. Piece the clues together, find a way to stop Voden and introduce the wyrm to “No One,” Odyssey-style.

The Liar, the Witch, and the World Tree

If you have played Stories, you will instantly feel comfortable with the controls in Omensight. Regular battles consist of you being surrounded by enemies and using dodge and hit combinations. Most of the game can be beaten with just light attacks and dodges, in addition to jumping when necessary. Should you want to unleash your inner badass, every primary button and trigger on the controller has an offensive function. The fluid combat system of titles such as Jade Empire, Spider-Man, and Batman games feels right at home here. Spearhead wants the gamer to find their own comfort level in this game; the variable combat definitely makes that happen.

Five difficulty settings add to the freedom of choice in the game. I played on the balanced difficulty to review the game. Even on that setting, the game occasionally ramps up the challenge. Definitely familiarize yourself with the levels and enemies before going to ‘True Harbinger.' The one con in the combat is confusion. Fighting with one character makes certain NPCs friendly; those same allies become enemies with a different companion. Enemies sometimes surrender, yet I had often bisected them before realizing they were begging for mercy. Moves required by the trophy list will lead some to just pressing square and triangle again. If you accept those challenges, however, the learning curve will balance out before you solve the mystery.

When you have finished doing your best Jubei impression on your enemies, often you will be presented with a choice. Either filet your partner's enemy (usually a boss fight) or use your Omensight power. As you unravel the mystery, three major visions hit you; these are the Omensight. Showing them to others can cause them to aid your search. Choose wisely because in these situations, violence may not be the answer, but it certainly is one of them. What I found interesting is that conscience is not a gameplay element in this game. The Harbinger's one and only goal is to rewrite history such that Voden does not triumph. Accomplishing said task by any and all means necessary is the order of the day.

The Currency of Deception

Spearhead Games seriously needs to get into television. The presentation of their games has everything needed for animated series or at least specials. The graphics of Omensight (and Stories), while not mind-blowing, overflow with emotion. The Harbinger is without a voice but your four companions are brimming with personality.

The art style is complemented by the use of distinct colors. Omensight is anything but monochromatic; you should definitely look around between battles and enjoy the scenery. Fans of Reynardo's adventures should pay attention to the seals. The colors definitely resemble those used in his tale. I have questioned Spearhead regarding the connection, but so far they will neither confirm nor deny my theories.

A Mousey Master of Musical Magic!

I will admit to being a Ratika mark. Spearhead fully grasps that a tale of fantasy needs the proper music to help make it fantastical. Ratika's song is but a moment in the game, yet a perfect example of what you can expect while playing. The overall sound design is a full course consisting of great voice acting, sound effects, and music. Believe it or not, these elements also provide you clues to the mystery if you pay attention.

Verdict: Should Your Prescription Include Omensight?

Spearhead Games has improved upon Stories in almost every way. The story seems straightforward and simple until you get into the meat of it. All of the sudden you are fielding curve balls from every direction. The narrative is written so that almost everyone will at least initially blame the wrong person. That is the type of storytelling that makes you want to push forward and see more. There is some predictability, but again, you will only see it if you pay attention.

Gameplay is as adjustable as the difficulty settings; some will just procedurally defeat foes with regular attacks. Those looking to maximize gameplay will pull out the stops and make use of all the attacks. I look forward to seeing some of the combat videos that will pop up on YouTube.

On the technical side of things, Omensight starts to falter. The framerate is choppy; usually, animation is smooth but there are intermittent stops even out of battle. I also came across an instance where the Harbinger just stopped moving and I had to restart. Considering the bugs that Spearhead has removed from the game, these are minor gripes. The blend of color, voice, and music are well worth the price of admission.

Bottom line, Omensight is $20 and well worth it. Add this to your PS4 or Steam collection today!