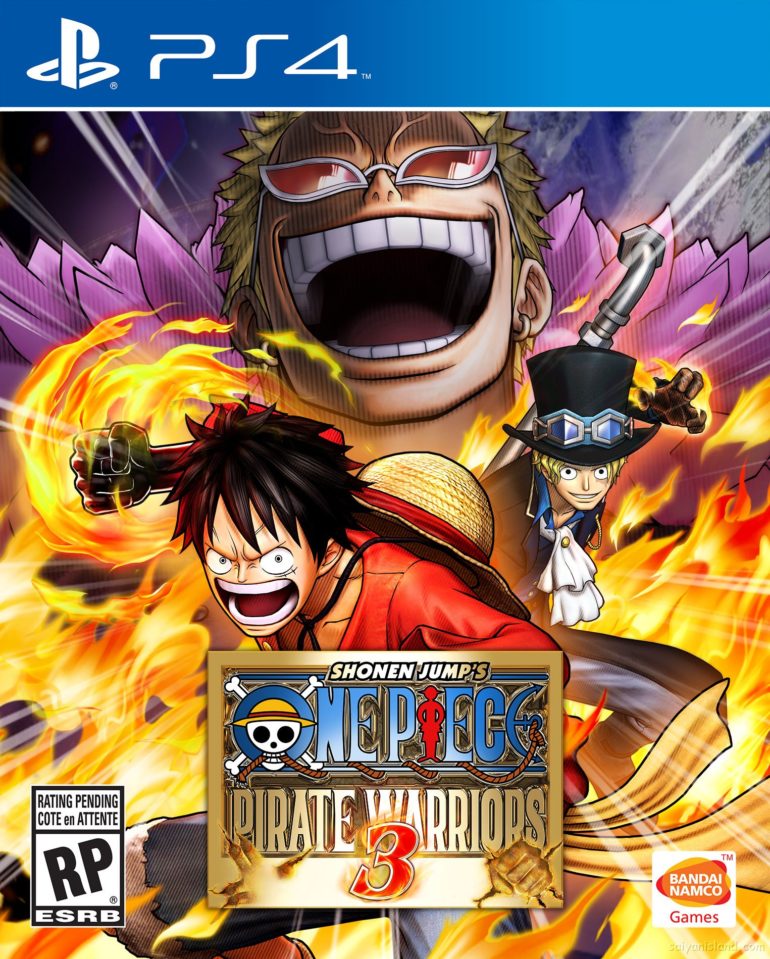 One Piece: Pirate Warriors 3 touched down (in North America) on August 25 of this year. Since it was part of the “summer slump,” I felt that it might have fallen under the radar. I myself would not have even noticed it had I not been on a huge One Piece binge that started in September, having watched over seven hundred episodes and over ten movies and specials. The odd thing is that this is the kind of game I would normally never touch because it is really Dynasty Warriors with an anime slapped on top of it. I am not trying to say anything bad about that series, it just was never my cup of tea. I am sure that many of you have binge watched something before. You consume a mass amount of content in a short period of time. What happens is we get greedy and it isn't enough. That is what made me pick up this game. I needed more from One Piece. Now we are going to find out if One Piece: Pirate Warriors 3 was able to satisfy that hunger.

I'M GONNA BE KING OF THE PIRATES! If you have never seen an episode of One Piece, here is a quick synopsis. A boy named Monkey D. Luffy grew up in a town called Foosha (Windmill) Village. One day, the Red Hair Pirates came to town. Luffy was instantly enamored with their captain, Shanks. The reason is that they were not your normal pirates: Yes, they are outlaws but they simply lived for adventure. They never intentionally harmed anyone unless one of their own was threatened. Shanks also saved Luffy from a sea king and sacrificed his left arm in the process. When the pirates decided to leave town, Luffy told Shanks that when he grew up, he would become a pirate greater than him. Shanks laughed, took off his trademark straw hat and put it on Luffy. He told him that he had to take care of the hat and return it to him one day when he was a great pirate. The legend of the “Straw Hat Crew” was born right then and there.

If you just want to enjoy the game itself, by all means do so. If you are however a One Piece fan and you are not up to date with the anime or manga, I warn you that this game contains major spoilers. To give fans a frame of reference, the game covers pretty much everything from the Romance Dawn through Dressrosa story arcs. If that was Latin for you, it means the game goes from the beginning past where the anime currently is. That alone would be enough to make fans want to play this game. For the uninitiated, trust that it means the game has a lot for you to play through and enjoy.

STRONG WORLD This is where I never thought I would play a game like this. I remember watching Dynasty Warriors review after review on Extended Play (which became X-Play). I wondered who bought these games. I saw the appeal but it was like Call of Duty and Madden to me – the same thing over and over. That is what I find truly ironic about One Piece: Pirate Warriors 3. The gameplay is exactly the same as every other title in the Musou (Warriors) franchise. That also includes the first two One Piece games in the series. Why I own this goes right back to the anime. Luffy is a maniac. Even before he gained the power of the Gomu Gomu no Mi (Gum-Gum Fruit) he was always raring for a fight. He doesn't care if it is one or one hundred enemies he faces (or even one thousand). His attitude is if he dies then he just wasn't strong enough to move forward. This makes the Musou battle system perfect for One Piece. Every member of the Straw Hat Crew and plenty of other characters in the series have faced off against ridiculous odds. Even Tony Tony Chopper, who stands at under three feet tall, has decimated squads of enemies. Button mashing is the order of the day for this game and it works extremely well. There are plenty of combos to learn and you will need them to get S rankings. However, if you just want to casually play through the game modes, pressing square ad infinitum will carry you through. Every character has their signature attacks from the anime. The special attacks can be combined with up to three additional support characters for clearing huge crowds of enemies and/or defeating bosses.

There are two primary game modes: Legend Log and Dream Log. The former is the game's main story mode and the latter an extra mode to unlock characters and complete the game's collectible sets. With sixty-four total characters (thirty-seven playable), there is quite a lot to work for in these modes. There is also Free Mode which lets you play the legend levels with any characters you have unlocked, not just those set for a specific stage. For the hardcore players, there is Nightmare Mode. To access it, you must have beaten all of the dream islands with an S ranking. Every island in nightmare mode has a level 100 difficulty rating. When you consider that Omega Force has accurately represented the abilities of the enemies in this game, this is an aptly named game mode. If you attempt to collect everything, this game easily offers over fifty hours of gameplay. Depending how many tries you need to complete an objective, that number could double.

“SUPER!” Fans of the show know that this game series captures both the look of the characters and their mannerisms perfectly. I do personally feel that more detail could have been given, especially to the main characters, but that is literally a nit-pick. Two specific characters come to mind, those being Nami and Franky. One Piece has a two year time skip after the Battle at Marineford. During this time, let's just say that Nami “peaked.” The character model in the game really only shows her age difference in the fact that she has longer hair at 20 than at 18. The younger version is a bit more “blessed” than she should be. Franky is a cyborg and had to physically upgrade himself during the time skip to get stronger. The improved version looks more like he is wearing accessories than having actually replaced his arms. Like I said, nit-picks that I just feel could have been better presented. One Piece: Unlimited World R did a better job of representing the characters, but to be fair, it only had to show the post-time skip versions. The graphics may not be on par with what the PlayStation 4 is capable of, but you have to remember this game was also released at the same time for the PS3 and the Vita. It makes up for it in the fact that literally hundreds of enemies can appear on screen. There is a trophy for defeating three hundred enemies within about a twenty second span. I have also pulled off moves that have defeated well over two hundred in one shot. You know because the screen fills with a big message telling you how many you just KO'd. While I can only pick away at the graphics, the music was a huge disappointment. I simply cannot understand how a game that is fully licensed by Toei Animation and FUNimation (hell, even Eiichoro Oda gives his blessing) does not have the real music from the anime in it. If you don't get why that matters, go on YouTube and listen to pieces like “Overtaken,” “Let's Battle” and “Luffy Moukou,” to name just a few. For audiophiles, playing this game is like trying to watch Star Wars without a John Williams score. If a fourth installment comes out, I know I am not the only one that would want this corrected.

“WOULD YOU SHOW ME YOUR PANTIES?” Hey, before you point out what an obvious pervert I am, that is how Brook would ask Nami or Robin to team up with him. Fortunately, in One Piece: Pirate Warriors 3, you only have to press a button. The entire game can be completed on your own, but in order to gain an online pirate ranking, you must team with others. Doing so actually facilitates obtaining collectibles and a more experienced player can help you unlock legends more easily than you might alone. I have to say that I wish you could team up with three others instead of just one since there are plenty of stages that have multiple companions and there seems to be no limit to the amount of enemies the game can throw at you. also, receiving a “rescue” request from a random player is only annoying if that person has a crappy connection and drops out during the game. At that point you have one of the characters simply standing there while you have to progress alone. This can get messy in later stages when there are veritable seas of enemies on screen. Regardless, the online and rescue modes are a breath of fresh air in today's multiplayer market because they do not feel forced. You don't need to play it if you do not want to and it is there whenever you do.

One Piece: Pirate Warriors 3 is a dream game for fans of the story. Every major character from the series is represented here and the game's robust roster will keep you smiling for some time. Whether or not you are a fan of Musou games, the play style is one you will take to right away. Of the available versions, you will want to play this either on PS4 or PC via Steam in order to get the best experience. As confusing as it can get at times, the fun factor of this game increases as more and more enemies pour onto the battlefield. How you play exactly is up to you as the game is very simple to play but it takes practice to “look good” as you tear through an enemy force. Level design is uninspired and it can be easy to get lost unless you learn to read your mini-map. The only true complaint I can give about the game is the complete lack of licensed music. That needs to be corrected in the next installment as this is really inexcusable. The bottom line is that everyone should try this game out, but fans of the series need to buy it. The PlayStation Store is still charging full price, but retailers like Best Buy have it for $40 or less. Being a long time non-fan of the Dynasty Warriors series, I feel a bit hypocritical praising this game because I still feel the same about those titles. However, the One Piece license makes this a game I simply could not put down. After my binge earlier this year, the game sated my appetite but left me wondering about the next meal. When all is said and done, instead of “the end,” all I want to see is: