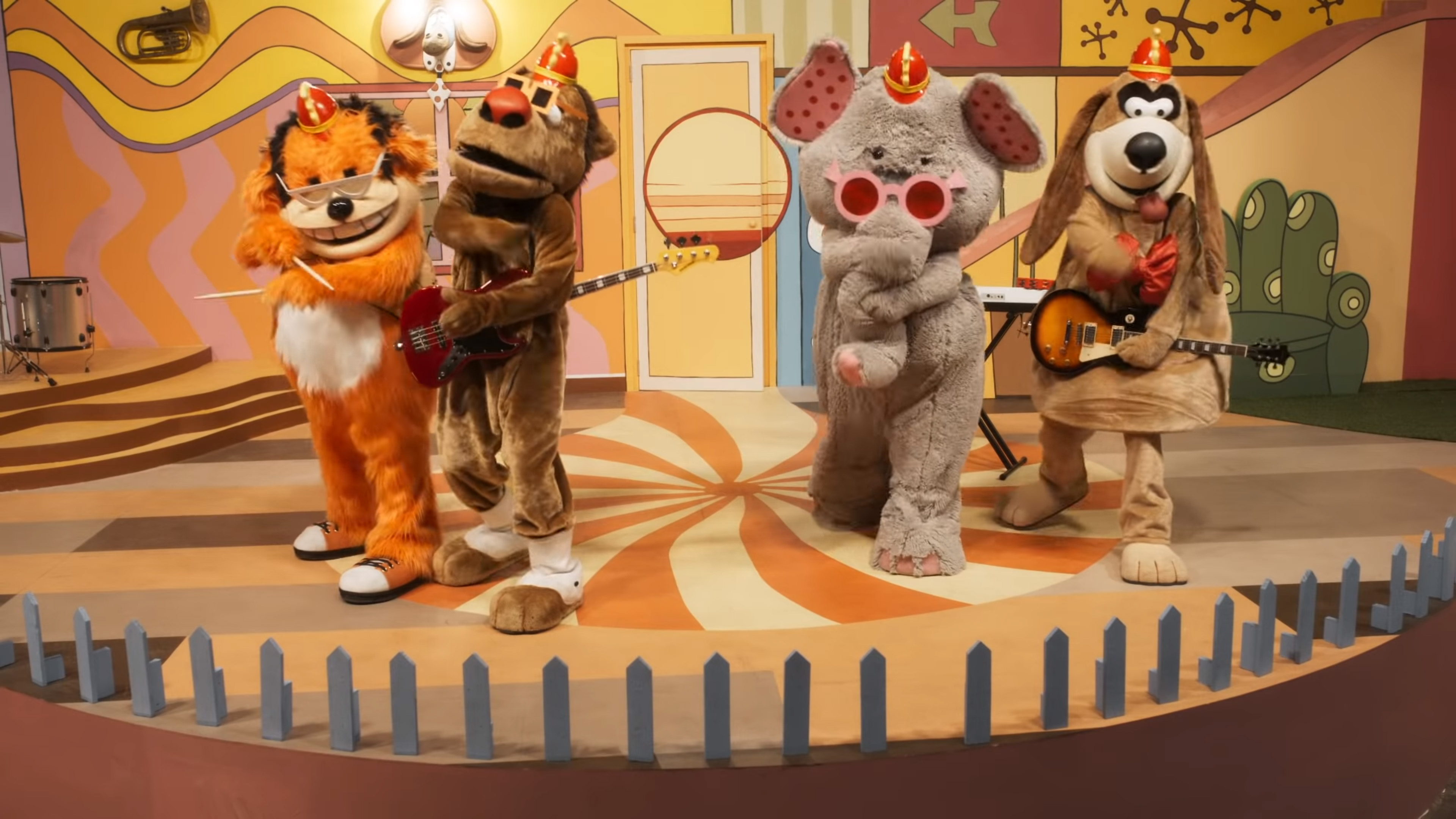 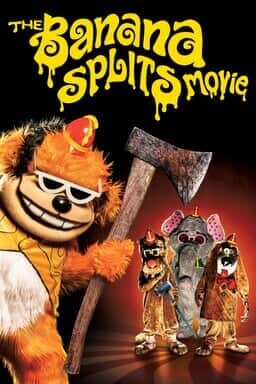 If someone were to mention Hanna-Barbra, you will likely think of cartoons. While this was their staple, the animation giant dabbled in live-action as well. Back in the late 1960s, The Banana Splits entertained children with crazy antics and music. Today, their cult following revives Fleegle, Bingo, Drooper and Snorky the only way possible: a horror flick. Nothing can prepare you for the terror of The Banana Splits Movie. Grab some popcorn and get comfy; this is gonna be a ride.

The Show Must Go On

The Banana Splits Movie begins like any horror worth its salt: with the innocence of a child. Harley is a grade school boy that has held on to his love of The Banana Splits show longer than his classmates. This has alienated him from them but he doesn't care because that is how much he loves them. For his birthday, his mom Beth gets tickets for the whole family to see the show recorded live. Older brother Austin and his distant dad Mitch come along with his classmate Zoe.
SPOILER: Zoe's mom forced her to go.

Everyone has a great time except Mitch who is dubiously preoccupied on his son's birthday. Austin scores a backstage tour for Harley and this is where the fun starts. The Banana Splits are giant, children-loving automatons that have discovered their show is being canceled today. This thoroughly pisses them off as they want to entertain children forever. I think the readers know what happens when you piss off robots. The show “must” go on!

I am not quite sure how to describe the acting in The Banana Splits Movie. The best performances came from a bunch of guys in goofy costumes that barely spoke. Even the children will make you cringe in this one. Once you get past the introduction of Harley's family, the story has some bright spots. The horror is full of camp and practical effects. If you enjoy old school flicks like Killer Clowns, Critters and the like, you can have a good time. The Splits are on their home turf and their violence is merely their show antics turned up to eleven. The scariest part is the ending and you will have to watch to see what I mean.

She Took it Down to Hammer Town!

The majority of the story takes place on a rundown television set, so do not expect special effects or CGI. This movie is literally not that type of show. Practical effects are the order of the day here. Pretty much all the kills are the kind you would see in 80s horror movies. Despite a few brutal deaths, the gore is light as horror movies go. The Banana Splits are robots, but the mechanical effects are laughable at best. Everything about The Banana Splits Movie screams low-budget, but it works in conjunction with their terrible puns.

It is really easy to dump on this movie. The characters are fodder, even by horror standards. You should stick around for the extras, however. A lot of talent went into the project and a lot of care was put into the presentation. The movie is purposely bad and the extras give a lot of insight into the production. We even get a ridiculous post-movie scene that adds to the ending. Overall, there are maybe twenty minutes of bonus material. If you sat through the whole film, you owe it to yourself to check them out.

The Banana Splits Movie is definitely an acquired taste. It is far from the worst film in the world but it is also not very good. The creators put passion into the creation as seen in the extras. That said, they clearly knew it would appeal to a niche audience. While watching I thought to myself, “this looks like something you would see on SyFy on Saturday night.” At the time I did not know that was really true. Aside from the costumes and the faithful recreation of the show, this is material Jon Stewart would watch in Half Baked.

I cannot bash this film completely as I found myself laughing at the horrific antics of the Splits. If you are one of those people terrified by clowns, this movie might be legitimately jarring for you. For everyone else, it is lighthearted horror in the “Freddy” sense of the term. I cannot recommend you go out and buy it, but I do recommend you watch if you enjoy cheesy horror. That said, you can check it out for free on TV next month before you drop $20 on it. Take that test drive and decide for yourself.

The Banana Splits Movie
Worthy of MST3K
This movie is terrible, but it is the kind of terrible you need to see. You know, so you can laugh about it. Check it out on SyFy October 12th at 9PM if you are unsure about paying money.
2
Rotten Bananas