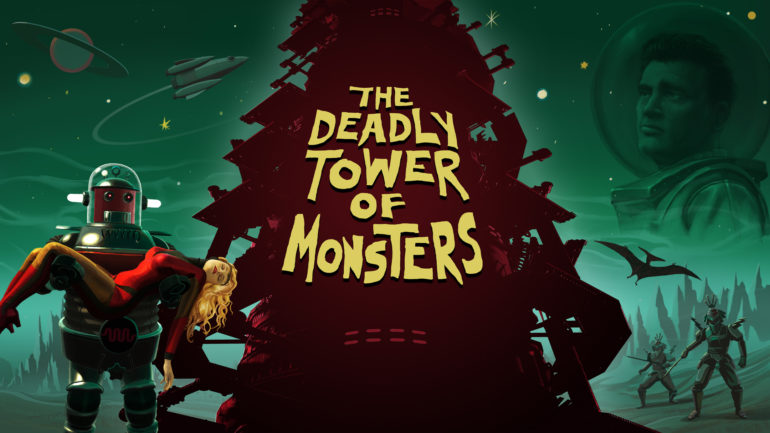 The Deadly Tower of Monsters is the latest action adventure game from ATLUS developer ACE Team. Anyone who has ever heard me on the entertainment segment of My Take Radio knows that I am horribly critical of current-day Hollywood. Maybe I really am just living in the past but with all the remakes and rehashes we see on screen today, I feel like the movie industry has stagnated. Back when I was a little boy, directors seemed to care more about their product and their vision. Maybe the color and imagination of yesterday really is gone. Maybe I am missing something when I see today's films. Or maybe the guys who made older films just did a whole lot of psychoactive drugs. Regardless of what the real issue is, there was a higher standard in the movies of old, even the ones that may not have been so good. This is where a classic director like Dan Smith comes in. Unafraid to throw his actors to the wolves (sometimes literally), he created masterpieces. Or maybe just one masterpiece – The Deadly Tower of Monsters.

LIGHTS! CAMERA! BAD ACTING! You know what was great about B-movies? They barely needed a plot! That is fortunate because The Tower of Deadly Monsters barely has a plot. Intrepid space explorer Dick Starspeed and his faithful companion Robot (wow, a robot named “Robot”) crash land on the dangerous planet of Gravoria. The indigenous population of the planet are monkeys, both good and evil, yet somehow they are ruled by an evil, human emperor.  His daughter, Scarlet Nova, despises her father's evil ways and enlists the help of Dick to free her planet. Only one thing stands in the way of this goal – THE DEADLY TOWER OF MONSTERS! That is literally and laughably the whole story behind the movie. However, that is not the point of this game. The game is about Dan Smith reliving the experience of making this movie. Essentially, you are watching the DVD release with video commentary turned on while also enjoying all of the extras, outtakes, bloopers and blunders that happened along the way during filming. As the gamer, you are a hardcore movie buff, heavy into the “classics” and you finally got your hands on this rare gem of a film. The great part about that is that regardless of age, I think everyone that likes and collects movies can vibe with that feeling. That feeling of picking up an old movie and saying to yourself “Wow, this flick is awful but I just cannot stop watching it!” That is what this game is all about. The commentary woven into the experience makes the story shine like the golden turd that it is. I seriously do not mean that in a bad way either. If you have seen the movie Ted and recall when they met Sam Jones, that is the kind of feeling this game gives you.

NOT “THOSE” REAGANS! Cheesy old movies get cheesy old jokes, so bite me. The Tower of Deadly Monsters has an angled, top-down view of the action which auto adjusts itself depending upon where you are in the game. From ground level, the camera looks down on the action from about a forty-five degree angle, allowing you a wide view of what is around you. Once you start climbing the tower, the camera pulls in depending upon your surroundings. On wider platforms, you still get that full view you had on the ground, but on narrow ledges you get about a sixty to seventy-five degree shot where you can use the right analog to peer over the edge. Even with the tight shot, it is hard to fall off of the tower unless something hits you. The game itself allows you to use an actor's improvisational skills to survive. Considering the array of melee weapons, guns and abilities your characters have, you could play through the game without taking any damage. The problem is that you would need to adjust your skills on the fly for that to happen. As Scarlet, your force shield will temporarily repel all attacks and enemies while the force push will knock enemies away. Dick has land mines that destroy barriers and can be used to destroy groups of monsters. Robot has the ability to slow time and maneuver around foes and dangerous obstacles. Not only are the abilities character specific, they also have a cooldown period. You have to pick the right person for the right situation to minimize damage and maximize offense. The guns also have a cooldown period if you use them too much, making melee weapons the only ones that have unlimited use. Even if you do get beat up by plastic dinosaurs or a guy in a rubber monkey outfit, there are more than enough health pickups to keep you going. The teleportation system also protects you from falls when you miss a jump or get knocked off the tower. This is useful as a reset button or to move from one area of the game to another you have previously played. If you do happen to die, director Dan Smith either makes a comment about the perils of filming or his assistant Patrick asks why there were no safety precautions on set. With multiple boss fights and scores of silly-looking enemies to dispatch, the gameplay is highly enjoyable. It easily could have been an arcade game that would have eaten countless quarters back in the eighties and nineties.

THAT MONKEY IS WEARING A WATCH The production value of The Deadly Tower of Monsters is bottom of the barrel awful. You can see the strings on the spaceships and flying monsters, the squid monsters have (clearly) human feet and you find yourself fighting against some little kid's collection of plastic dinosaurs. Wait a minute, did I . . . Is that monkey wearing a wristwatch? Once again, the production value of the movie is awful but that is what makes the game so good. You notice something is wrong from when the game first loads. The audio is garbled and the video is “dirty.” Younger gamers may or may not appreciate the option to turn on and off “VHS quality,” but making the game's “film” show age like this makes it top notch. The detail of making very good high-definition graphics look really low quality and purposely gimping the animation of some creatures to make them look like stop-motion photography is brilliant. Also, if you cannot stand the “VHS” version of the game, you can turn it to DVD, but that takes the fun out of things in my opinion. The draw distance of the game is impressive as well. You can see the surface of the planet from the very top of the tower and there are no fog effects used to obscure that view. The one thing is that smaller islands may not come into view until you get closer, but that is understandable. Adding to the fun are the collectibles that are like DVD Easter eggs. There really are monkeys with watches on to find and you have to kick them off of the set. Finding things like that and hidden film reels add to both the length and enjoyment of the game. Of course trophy hunters will absolutely want to find them to get that platinum as well. There are so many nods to old sci-fi flicks in this game that you may play it several times just to enjoy them all.

If it is not already obvious, I really enjoyed playing The Deadly Tower of Monsters. The story of a washed up director validating his one achievement while playing through what would have been a feature on Mystery Science Theater 3000 is incredible. The gameplay is fun and silly as some of the moves you pull off make no sense at all. A forward roll deflects rocks, lasers and electricity? OK, I'm game. I can kill a dinosaur that is five times my size with a knife? Sure, sign me up for three of those. This is not to mention that ACE Team created a very pretty game. Even when you have VHS film quality active, the game looks fantastic. For $15, this is one of the first games of 2016 that you must own if you have a PS4. Throughout the game, Dan Smith talks about how the old movie effects are better than the fancy digital effects today. While I only partly agree, there is something in his commentary that applies to games today. ACE Team really kept things simple here from concept to execution and they came up with something great. With so many games at the full $60 price point not being worth our money, it is refreshing as both a gamer and a general consumer that real quality can be found for a fraction of that amount.