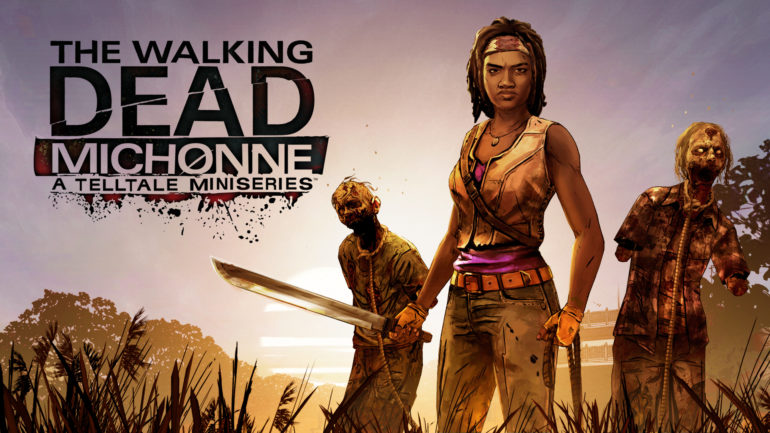 The Walking Dead: Michonne follows the exploits of the comic book version of Michonne; I need everyone to be clear on that. I do not mean any disrespect towards the television show and I love Danai Gurira, but that is not the real Michonne. It's like Batman & Owlman; same but different. If any TV fans still don't get what I mean, go read the comics, specifically the time she spent in Woodbury and you will experience quite a different character. I also want to caution anyone who has yet to experience this game not to expect to see any of Michonne's normal friends or foes (aside from walkers); this story has her separated from her group and falling in with another. None of those people are named Lee, Clementine, Kenny, etc. so do not expect the cast of the video game series to appear either. This miniseries stands on its own and its focus is our blade-wielding, batshit crazy badass named Michonne.

This is an overview of all three episodes. Spoilers are kept to a minimum.

IT'S SO HARD Michonne (Samira Wiley) is separated from Rick's group. The events of this story happen between issues 126 and 139 of The Walking Dead comic book. Michonne finds herself alone in the woods, walkers closing from all sides. As she begins to dispatch them, she starts thinking about her daughters and her mind starts playing tricks on her. Unable to deal with the realization that she was not there for her girls, she contemplates suicide but is stopped by a man named Pete (Malik Yoba). Regardless of your choice, he notices what you were about to do and brings you into his group who live on his boat. This life is peaceful for her but we all know nothing lasts in this world. Pete and Michonne run into a pair of siblings named Greg (Booboo Stewart) and Sam (Devery Jacobs). The brother and sister have stolen from a boat community called Monroe and Michonne and Pete are captured along with them under suspicion of collaboration. Another pair of (older) siblings named Norma (Cissy Jones) and Randall (Derek Phillips). These two run Monroe and although they will maintain throughout the story that they are good and reasonable people, you will find them to be anything but. The story is both tragic and brutal. In terms of what readers have experienced up til now in the comics, the violence is light. Even so, there are a lot of unnecessary deaths and the walkers are probably only responsible for about a tenth of them.

I really liked the characters that Telltale Games created for the story. On one end, you have Pete who symbolically represents good, both in Michonne and society. He continuously puts himself out for others and while the options he presents Michonne with may not always be the best ones, they always lead Michonne down a “better” path. In contrast we have Randall. He not only represents the bad in Michonne and people in general, he is sleazy about it. He always tries to make it seem like it is someone else's fault that he has done wrong. A classic abusive type, he is the kind of person that will not only say that it is your fault he beat the crap out of you, he will try to convince you of it as well. Good character creation like this add strength to the story.

While I praise the characters and the overall story, I felt that things happened too fast in this game. I understand that there were only three episodes, but the episodes themselves should have been longer like the original Walking Dead series. With those I remember saying to myself “Damn! This is the same episode?” Each episode would take a goo couple of hours to complete but nothing felt rushed. Don't get me wrong, I feel like this chapter in Michonne's life was told from start to finish, but I just feel as though it could have been fleshed out more. This especially applies to the flashbacks. I wanted to see more of what she went through to try and find her girls. We can guess what happened to them, but it just would have given more weight to the story to actually see it. This is something that Telltale really needs to think about in scripting season three of The Walking Dead.

DEAD TOO SOON Even the biggest fans of Telltale Games will pretty much agree to the following statement “If you have played one of Telltale's games, you have played them all.” This is not meant to be a negative statement. These games are essentially interactive stories; they are going to follow a certain gameplay formula. In that sense, yes, they all do play the same. Telltale is well aware of this and they try to do something new with each game. I hope the programmers read this. I appreciate the effort to make the gameplay feel fresh, but please, never do a button combination like the one below deck in the ferry ever again. A three button combination out of nowhere with less than a second to respond is a terrible way to “surprise” players. The only other control issues I can recall were in the second episode as Michonne was approaching the house and in the final episode where Michonne was crawling inside the house. In both cases the game has you push the character forward with the analog at a weird angle which causes them to stop if you do not push just right. This led to a couple of frustrating deaths where I was doing what I was told but the character was not responding. The control has come a long way in the four years since I started playing, but it still is not perfect; that is by no means a reason to pass this game up however.

LIGHT YEARS I recently played through seasons one and two of The Walking Dead on the PS4. I played them long ago on the PS3 (and even on the 360) but I wanted a PS4 save file for when season three begins. Having a fresh perspective on the beginning of lee's story all the way through the uncertain status of Clementine, I can tell you that Telltale has come a long way. The Walking Dead: Michonne uses the same art style as the previous games because they want the game to resemble the comics. One can immediately see the improvements in things like the depth of color, animation and detail of the character models. Then there is the music. Telltale has always done an excellent job of using music to evoke emotion. I cannot hear that recurring theme from season one without getting a little sad and picturing Lee's final moments with Clementine. Michonne doesn't have much time for tears in this story and “Gun In My Hand” by Dorothy was the perfect way to illustrate that. I look forward to seeing how Telltale will continue to refine their game engine and push the visuals forward when season three and Batman come out.

I loved playing The Walking Dead: Michonne, but I have mixed feelings about the overall product. The characters created for the story were well crafted; Randall and Pete were almost perfect opposites pulling at Michonne's conscience. Norma and Randall's way of twisting things to make their actions the fault of others mirrors the way a lot of people behave today. it probably mirrors the way a lot more would behave if a world like that really existed. I just felt that the story itself could have been more; things were rushed and even though way more people lived than I expected, many of the deaths that did happen felt like they were just for effect. Sam's Father was not handled well; for someone that survived for so long he made one too many stupid mistakes. Fortunately, the story is the only real speed bump for me in this game. The controls, while having slight issues, were what one would expect from Telltale. I do like that they tried to throw a monkey wrench in every once in a while. This story is part of the comic's canon, so there was no question that Michonne had to live through to the end. The choices presented at the beginning and end made that certainty more of a question and that is good storytelling. Back in my review for Game of Thrones, I came down hard on the animation and audio clipping issues. It is great to see Telltale putting effort in to ensure that those days are behind them. There were still some audio issues, but those were mainly during the ending credits. In all, fans of the comic will love this game I believe. Fans of the television show (that have never read the comics) might be slightly thrown by this portrayal. Make no mistake, this is the original Michonne; her tale is one worth telling.