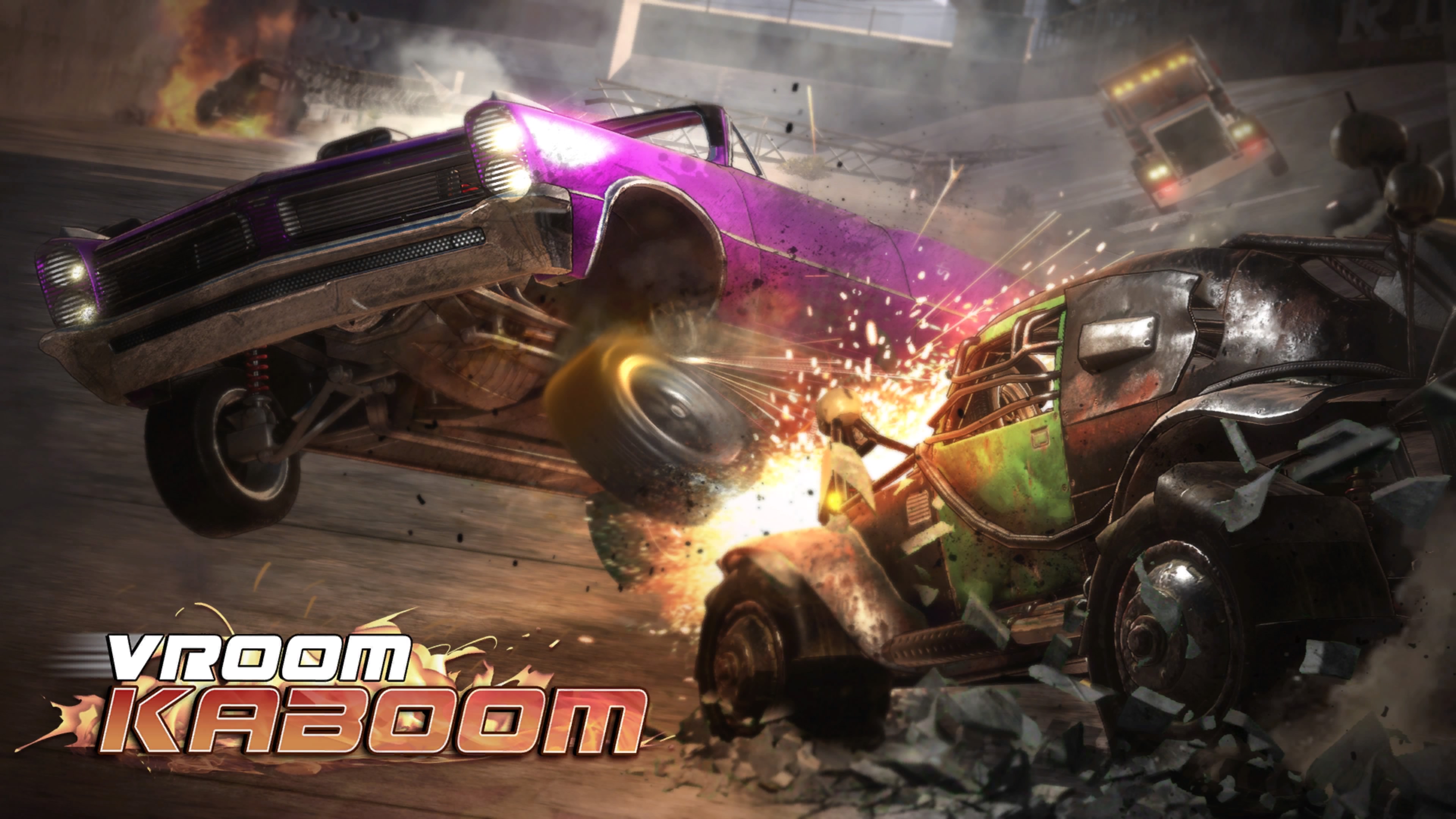 Vroom Kaboom Is Not What it Seems

At some point in your life, you have probably had preconceptions about something only to have the final product be different. Perhaps a movie did not live up to its trailer or someone you thought was cool has no personality. The ever classic mistaking baker's cocoa for a big candy bar. This applies to games as well sometimes. In following the trailers for Vroom Kaboom, I originally thought it was a Twisted Metal vehicular combat game. Of course, there is combat, but this tower defense and deck building game is much different from what I expected. Let's see if that is a good thing. 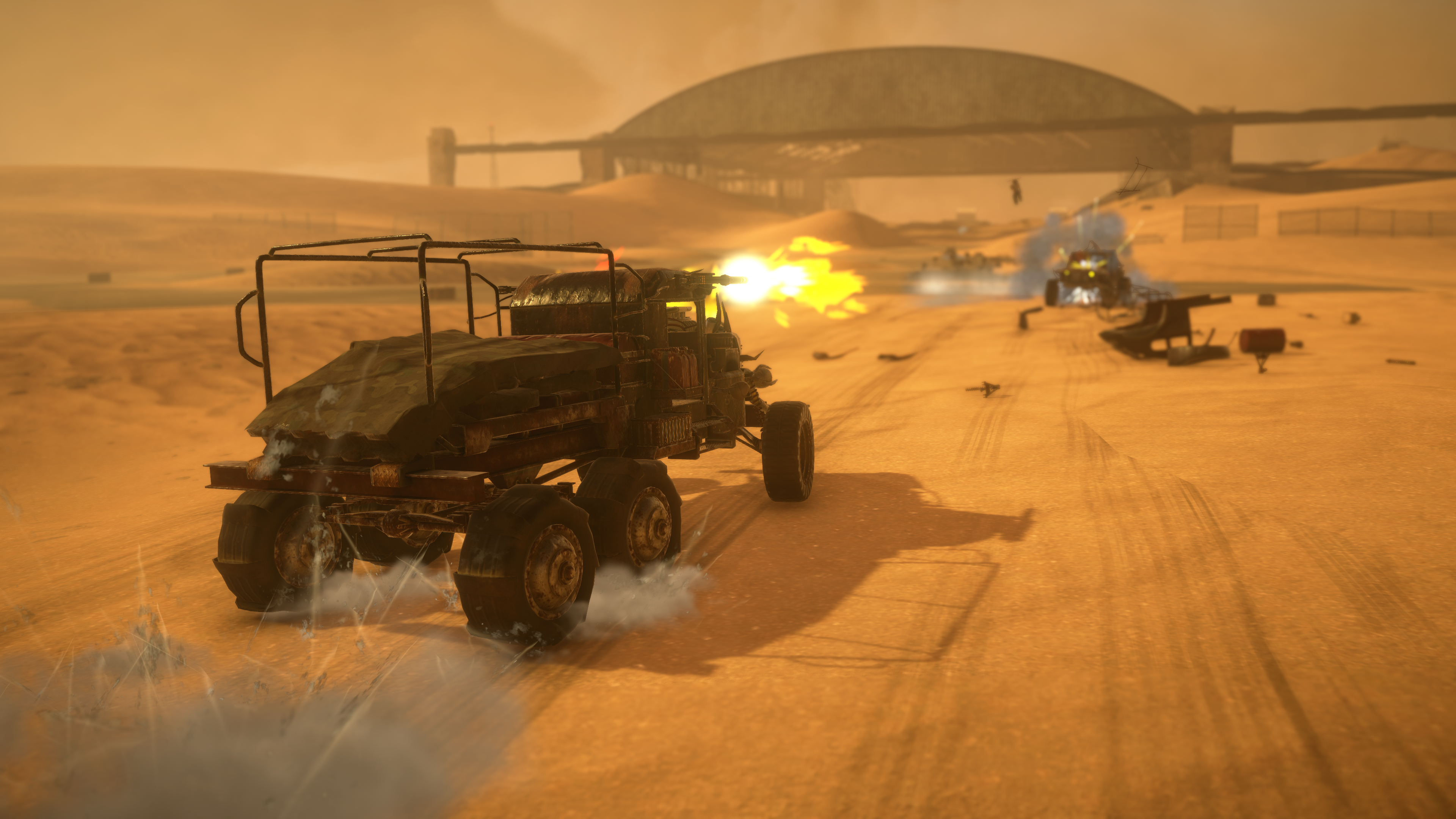 Words Just Get in the Way!

Let it be known that I am not going to hold the story of Vroom Kaboom against its review score. The reason for this is that there really is no story. When you start the game, you are allowed to choose between three factions. Choosing “Drift City,” “Soul Station” or “Skullborough” simply determines the vehicles you will use and collect along with the stages you will play. There is no explanation as to why these people want to destroy one another or what they will gain from it. Just get behind the wheel and smash! 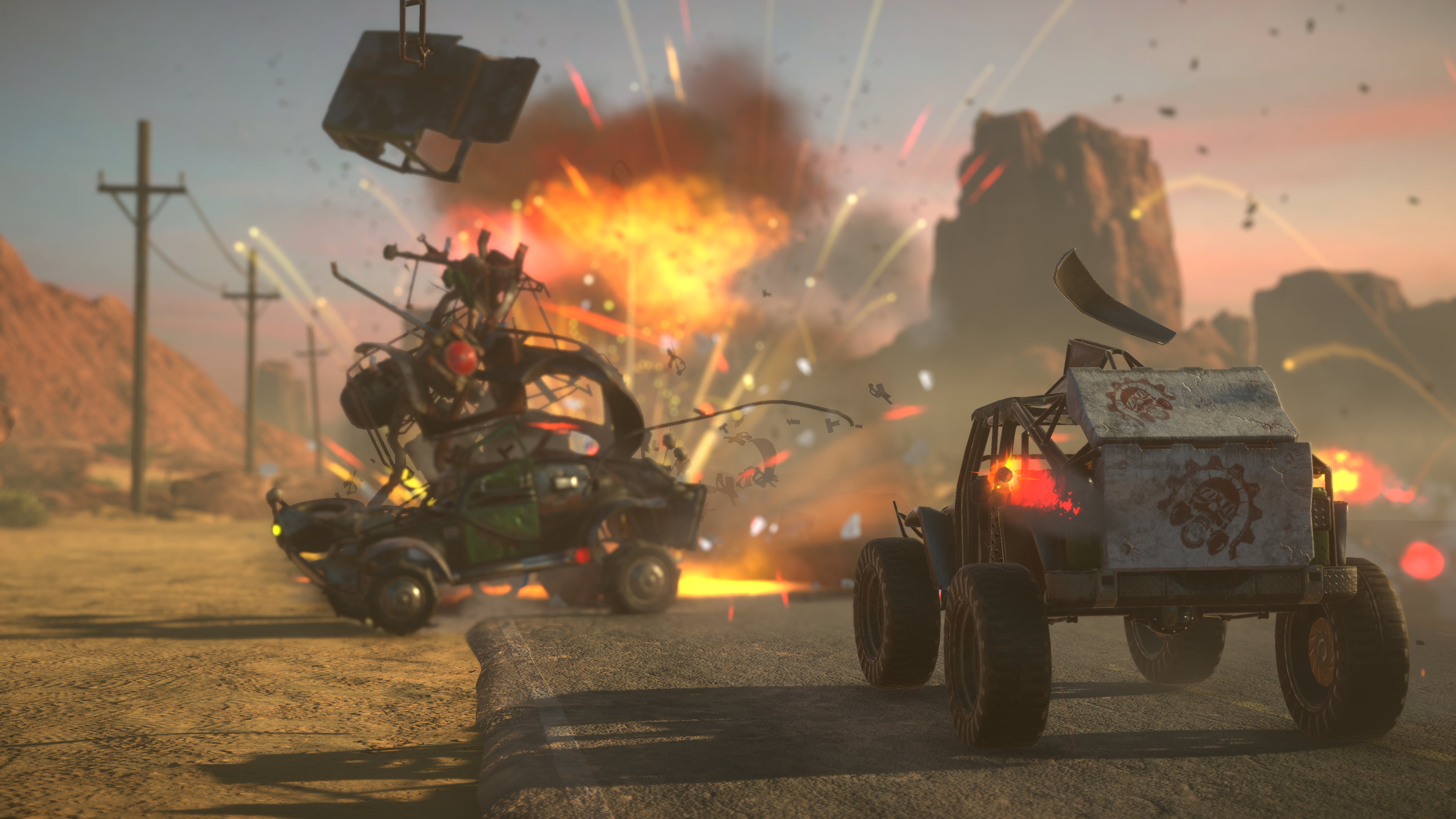 I mentioned that I initially thought Vroom Kaboom to be 2018's version of Twisted Metal. You will use dozens of insanely modified vehicles to destroy everything in sight, but not in the same fashion. Start a match and you will choose an available vehicle from your cards. Said vehicle (or projectile) must be navigated across the field toward an enemy oil tank.

You wash, rinse and repeat until you reach your main objective while also trying to hit secondary objectives. Winning ranks you up and rewards you with new cards. Losing causes you to lose rank and you have to repeat the highest level you have started or lower. There is really zero strategy involved, but the difficulty is enough to make you grind.

What Really Grinds My Gears

The gameplay formula works, but just barely. You will find yourself getting destroyed by projectiles you cannot even see. When you have your own weapons, trying to aim or drive is a mess. Vehicles that ram and/or jump are serviceable and some of the larger beasts are a perverse thrill. The card battle part of the game is absolutely fine; I think it is cool collecting vehicles in that manner. Unfortunately, the tower defense is non-existent. You never actually protect your oil tanks; you just attack those of your opponents. The awful steering makes the game feel like it should have been strictly card-based. 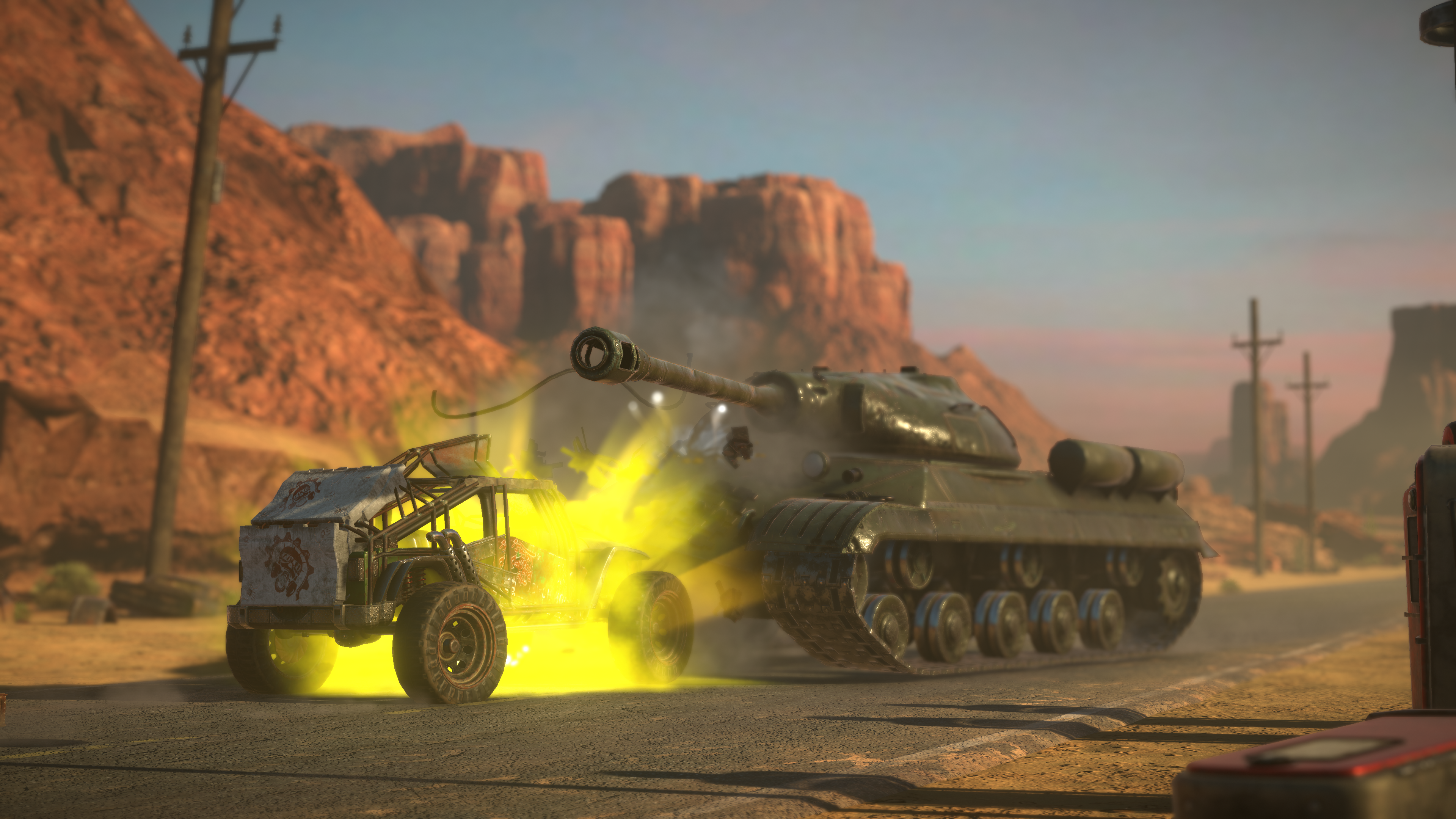 All these hi-res screenshots and the trailers on Ratloop Games Canada's YouTube are stretching the truth a bit. While they are technically accurate representations of the in-game graphics, the game does not look this good. I play on a PS4 PRO connected to a Samsung UN55MU800DF 4K television. Short of playing on an Xbox One X or a super high spec gaming rig, the picture does not get better. The detail you see in these images above is just not there. At best, these are PS3 graphics. The music is generic PS1 butt rock. That would not be so bad if the default volume were not set to movie theater. The framerate is smooth, but that does not matter if you are not excited about what you are looking at. 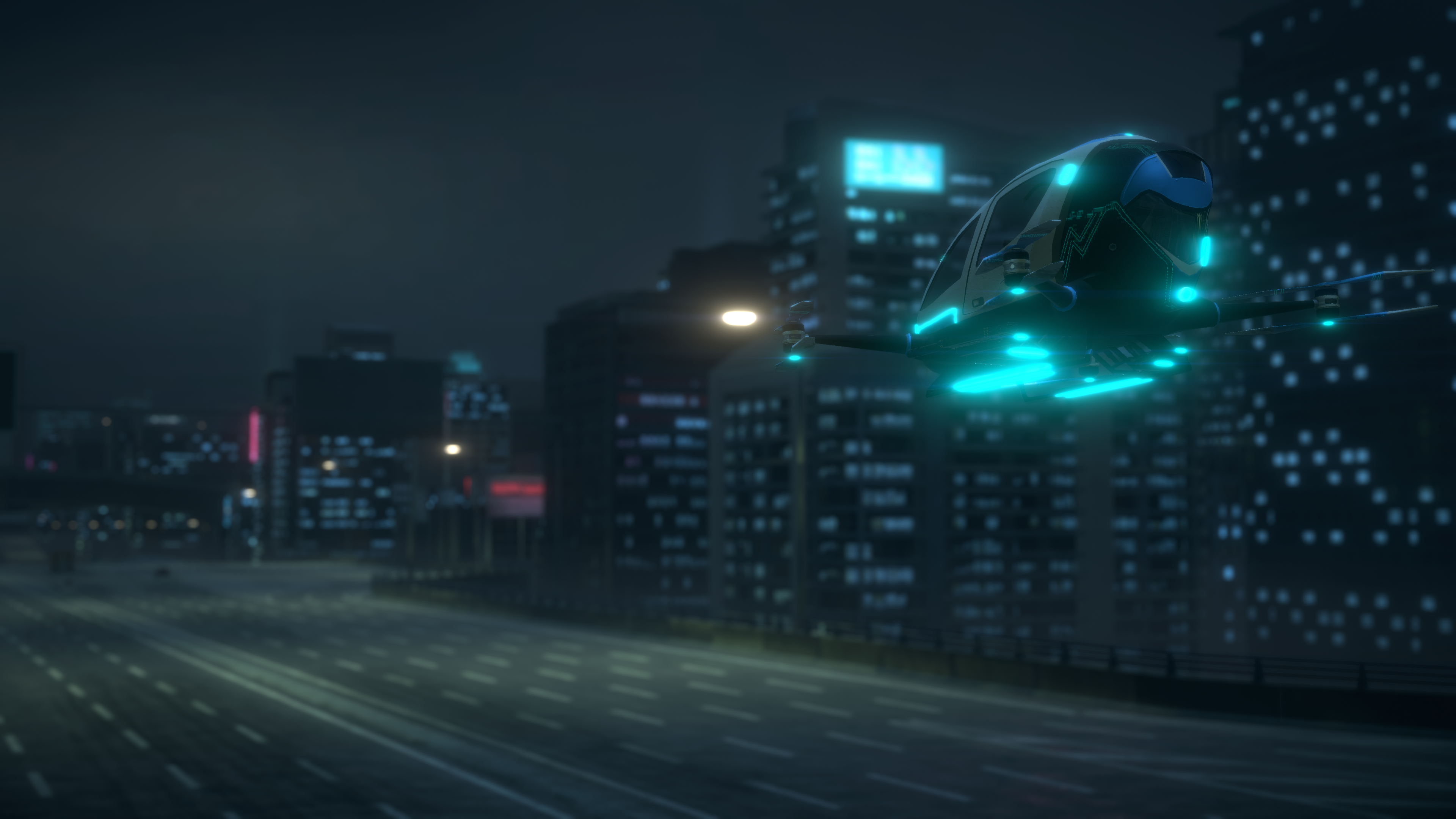 In my experience with Vroom Kaboom, I was never able to start a multiplayer match. I am unsure if it is server issues or just that no one is playing. The menu offers options for 1v1, 2v2 or 3v3 matches which I would like to tell you about. I even checked out PlayStation matchmaking groups I am in but I was the only one who has the game. For now, the (PS4) online community for this game seems to be non-existent.

Verdict: Does the Game Pack Any “Vroom” or “Kaboom?”

I could write this off as saying I was disappointed because Vroom Kaboom was not what I expected. Sadly, that is not the case. I kept an open mind going into this and I often enjoy card battle games. Ratloop Games Canada tried to make something different and I applaud them for that. Unfortunately, this is not a real tower defense game. All you ever focus on is attack and even that is not executed very well.

The Cards Battle You

On the Card Battle front, things run more smoothly, but only slightly. During a match, you steer your vehicles into resources to activate the cards at your disposal. You can recycle unwanted cards to get something better but when it comes to buying new cards, the game fails. There is no explanation of how to purchase new cards and I was unable to figure it out. Adding more cards to my arsenal may have increased my enjoyment.

Vroom Kaboom is a complete game but also completely unworthy of your time and money. It feels like Ideas were (literally) thrown at a whiteboard and this is what stuck. Either that or the person who thought up the concept told the team on Friday and said: “I'm on vacation; see you in six months!” A baffled dev team proceeds to cobble together the video game equivalent of Powerpuff Girl Bunny. Ultimately, this game needs to go back to the drawing board and come back out as a mobile-only release for about $1.99.