Remember the old cliché of seemingly coming home to the same meal every night? “Meatloaf again?” is the phrase that comes to mind. It’s a damn shame when a movie feels like meatloaf, again. The word “sequel” is generally a bad word in moviegoer terminology and I have gone into depth on that on several episodes of the show. At the very least, a sequel should build upon the original (or previous) story and offer new ideas, even if they suck. Me personally, I was hoping Hangover 2 would be a complete departure from the first because I happen to fall into a minority that just did not find the movie very funny. Surprise! They phoned this one in, but the public is still eating it up. Color me baffled. 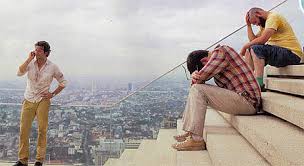 Here’s the part of my review where I generally give you a synopsis of what the movie I am ranting over is about. I try to tell you what to expect without spoiling too much and at least attempt to stick to what has already been revealed in trailers and commercials. In all the reviews I have written, this task has never been easier. See the above photo? Phil (Bradley Cooper), is calling Tracy (Sasha Barrese), the bride in the first movie the only spoiler you need. He says three words that literally tell the movie: “It happened again.” Yeah, three words are an entire movie spoiler because ninety-nine percent of what happens in this movie happened in the first. And that is literally all I am going to say on the story.

Now here is the funny thing about the movie (no pun intended): Hangover 2 is not bad – not at all. Hell, the first movie was good in terms of it being well scripted, having a good cast and said cast working together. The same is true in the sequel. Zach Galifianakis and his “Wolfpack” have the makings of a great comedic team. Someone just needs to tell the writers to stop taking things so seriously. I mean, I know it has been a long time since we have seen true pairings of comedy greats like Pryor and Wilder, but damn, watch some old movies and take some notes!. Word is that Craig Mazin, one of the writers of this movie is already in talks to work on The Hangover Part III. I have come to accept that we live in a world of sequels; I have even come to accept that bullshit sells, but please get this one right. I really would like to love one of these movies.

There is really not much left to say. I feel like Chow here, standing in an elevator with a bunch of smelly assholes waiting for a miracle. The Hangover franchise somehow makes money, I get it. For some reason, people are content with watching the same movie twice and this is why Hollywood shovels this feces down our throats. The second Hangover is a remake of the first with some macaroni art smacked all around it to make it look different. It is not a bad movie but it is not a terribly funny movie. This is the problem. The movie is labeled a comedy and it really isn’t. It’s too bad the movie is doing so well because if it flopped, we might get a better product for the third. Do not pay to see this movie and do not buy the video when it comes out. When it comes to movies, quality control is us, the moviegoers. If we pay for crap, it is all we are going to get.