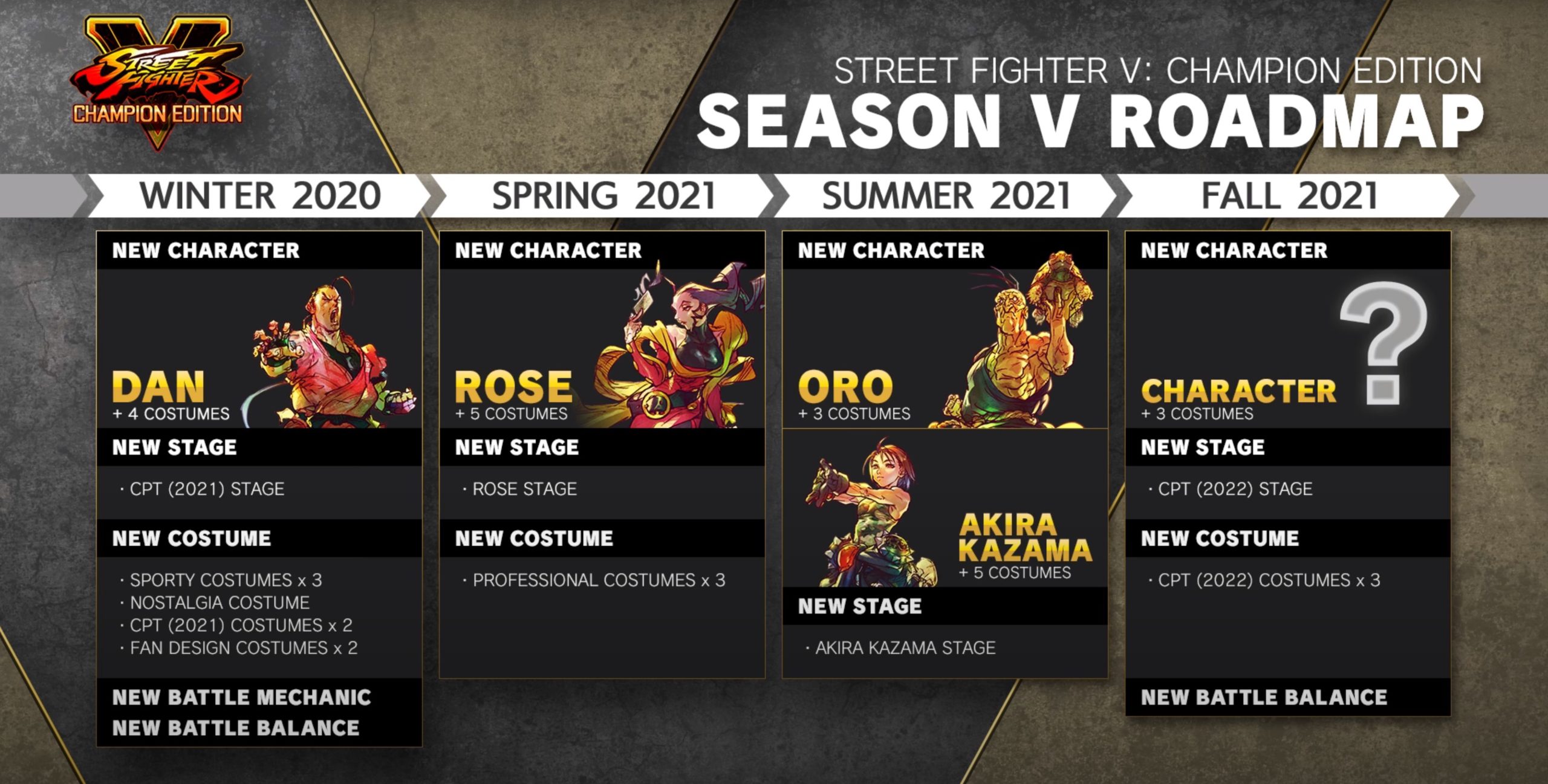 Street Fighter V is in its fifth year, and season five content is coming. Earlier today, Capcom had its summer update web presentation for their premier fighter. Five new characters will be added to the roster between this winter and next fall. Dan Hibiki, Rose, and Oro are returning to the list of World Warriors. Akira Kazama from the classic Rival Schools will make her Street Fighter debut. There is one more, as a yet unnamed character coming as well. This is the first significant update since the Champion Edition launched in February. Expect new stages, outfits, and game balancing as well.

Four of the five characters coming to season V have been announced. Without further ado, here is a description for each. Once the fifth and final character is announced, we will be sure to give you the details. Note that these characters are not included in the Street Fighter V Champion Edition. That package only includes content up to and including season four. Sales on the digital content begin today for both the PS4 and Steam versions and are good through August 20th. Now is a perfect time to upgrade!

A mainstay from the Street Fighter Alpha series. Dan Hibiki last appeared in Street Fighter IV. He returns to the fight with his (over) confidence and iconic “Taunt.” A training partner of Ryu and Ken, Dan “schools” other players with his unique Saikyo-Ryu (“Strongest Style”) fighting style.
Release timing: Winter 2020

Rose is a fortune-telling fan-favorite from the Alpha series and Street Fighter IV. Using her tarot cards, Rose has a variety of unique special moves fueled by her Soul Power energy.
Release timing: Spring 2021

Last appearing in Street Fighter III: 3rd Strike, Oro is an ancient martial arts master existing as an immortal hermit. He restricts one of his arms from use in order to give his opponents an advantage. Regardless, Oro is one of the most well-trained and powerful fighters on the roster.
Release timing: Summer 2021

First introduced in Capcom’s 1997 fighting game Rival Schools: United by Fate, Akira Kazama makes her Street Fighter debut. As an acquaintance of Sakura, Akira has previous ties to the Street Fighter universe. She is gearing up to bring her biker style look and clever gimmicks to Street Fighter V.
Release timing: Summer 2021

In addition to these five new characters, over 30 new costumes and four new stages are also being planned. This includes a Rose stage (Spring 2021), Akira stage (Summer 2021) and two new Capcom Pro Tour stages. The Capcom Pro Tour stages will arrive in Winter 2020 and Fall 2021. A new battle mechanic and new battle balance adjustments will be available in Winter 2020 as free updates to all players. These will add even more gameplay enhancements and depth to the game’s combat system.

Street Fighter V: Champion Edition includes all content (excluding Fighting Chance costumes, brand collaboration costumes, and Capcom Pro Tour DLC) from both the original release and Street Fighter™ V: Arcade Edition. Champion Edition adds each character, stage, and other content that released after Arcade Edition and through the launch of this new version. In total, this robust edition of Street Fighter V features 40 characters, 34 stages, and over 200 costumes.

Both the full version and upgrade kit of Street Fighter V: Champion Edition is currently on sale for 25% off on PS4 (digital only) and on Steam (digital only). The digital upgrade kit offers current owners of any version of the game instant access to all unowned Champion Edition content. For new players, a free trial featuring all 40 characters is underway on PS4 and Steam. All versions of the base game are currently 60% off.