The Johnnys, Timmys, and Spikes of the world have had enjoyed 15 years of peace, but Magic: the Gathering is finally getting another “Un” set in the form of Magic: The Gathering- Unstable. For the UNinitiated, “Un” sets are joke sets, and there have been two sets before Unstable. However, a lot has changed in Magic since Unhinged, and it looks like Unstable is going to be a lot of fUN. So just like we did with Ixalan, let's take a look at the Top 10 cards that are coming out of Unstable. Unlike Ixalan, these aren't legal to play in any game type that isn't draft play or casual play, so these are cards I see making casual games of commander even more fun and chaotic.

It would just be unfair to put the most powerful character in the twenty plus year history of Magic who is finally getting his own card into any higher place. The fact that an Urza Planeswalker exists at all is amazing. Maybe in the next set, Dominaria, we will get a real Urza Planewalker, but for now his head will do. Urza has the power of every Planeswalker ever printed, which makes sense. Practically unplayable, and completely made for novelty sake, Urza is still a fun card and the first five color Planeswalker. 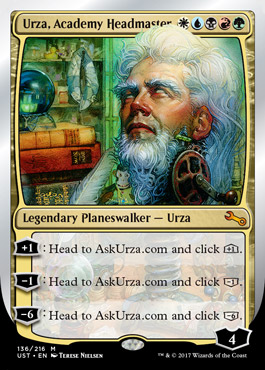 Everything that a white-blue deck personifies, locking down your opponent. Unless your opponent is playing five steps ahead of yours, they're boned. The only reason it is so low on this list because you'll be hard-pressed to find someone who lets you play this in your deck. 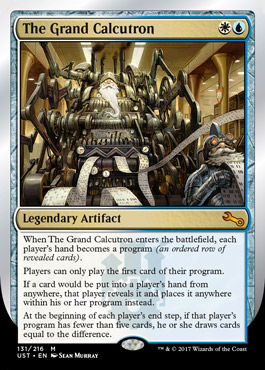 The best Unstable cards don't require other Unstable cards to be effective, and Earl of Squirrel is proof of that. While it would have been great for Earl of Squirrel to be legendary so it can be a commander, he will still go great in any type of deck that is running tokens. While there are certainly quicker ways to build up tokens over time, the idea of pumping up Earl with Ethereal Armor or artifact equipment and littering the field with squirrels will be a powerful strategy. 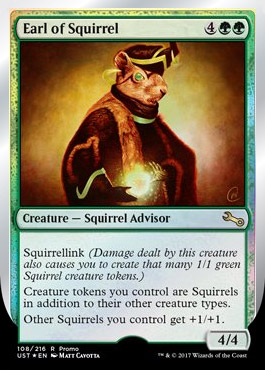 Nothing better than a nice bleed card. What feels like an Unstable successor to one of my favorite Magic cards, Stab Wound. Hazmat Suit can either be used as a form of control or a quick buff. While the 4 drop price tag is a bit steep, Black decks in commander don't usually have an issue generating mana. 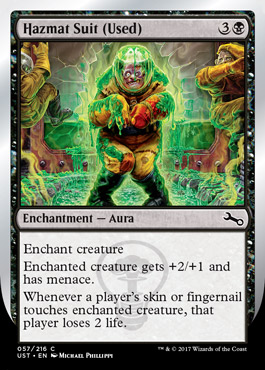 6. Hangman/ The Countdown Is At One

Hangman is the embodiment of what makes Unstable so good. A cheap one drop who can grow to freakish proportions while also creating a new, easy to understand, meta game. Hangman might be my favorite card in this entire set, as I can already picture players whipping out a dictionary to find the most obscure word possible to bring Hangman to mythical proportions. The same can be said for The Countdown Is At One, as it doesn't give any one player an unfair advantage. All it does is bring to light what Magic should be all about – having fun. 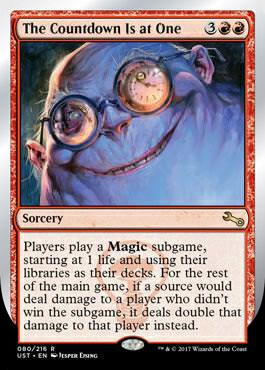 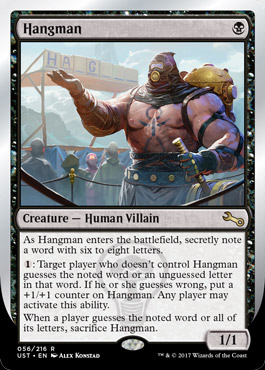 This goblin does something never before explored in Magic, being able to enter combat on someone else's turn. It's almost scary what this means in a multiplayer game. While his power and toughness are pathetic, finding a way to give him vigilance would change the entire mindset of battle. 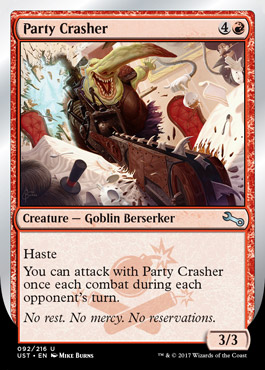 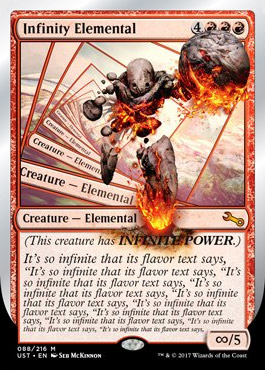 The only way to play cards that have a mana identity different than your commanders. It's text is interesting, as all, it can be any banned card from any format. So, if you wanted, you can pay eight life and put any card from the power 9 into your hand. You can have any card in your deck that you want, as long as your deck runs black. 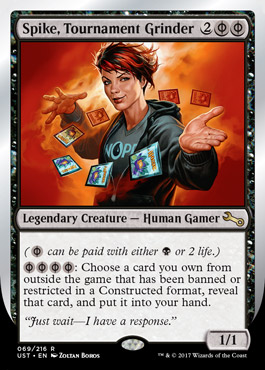 The closest thing you'll get to being able to scry four different cards at one time, Split Screen is a Commander game's godsend. Considering Wizards recently banned several Tutor cards (cards that let you search for a specific card in your deck) Split Screen is the next best option without being completely broken. Being able to look at four cards at the top of four different decks is just mind-blowing. Expect Split Screen to be instantly removed from play when it is cast. 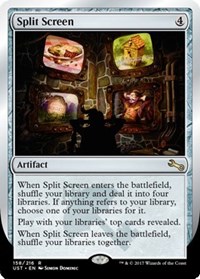 This card was printed in four different versions, with four different abilities on each card, making each one different. Having different options at your disposal makes you a nightmare. Blue is eternally hated for being able to “nope” your opponent at any time and shutting down your enemy. All four versions of Very Cryptic Command allows you to always have an answer for whatever your opponent is packing. 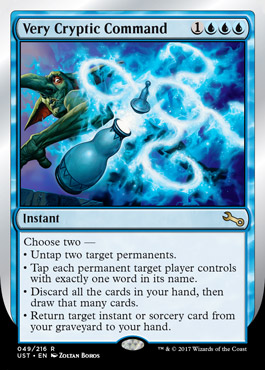