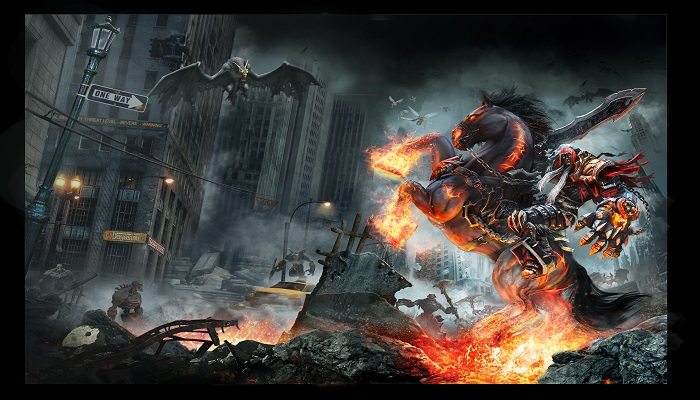 In an era where remasters are a dime a dozen with some of them being nothing more a shoddy port, I'm happy to report that for those who've never played it back upon its original release, Darksiders: Warmastered Edition is the best way to experience War's path to vengeance. However, is there anything new in Darksiders: Warmastered that warrants a return trip for veterans?

If you somehow never heard of Darksiders in the seven years since it's been released, it is essentially an M-Rated Legend of Zelda with more combat. You play as War, one of the Four Horsemen of the Apocalypse, as he is framed for a crime he didn't commit. What starts out as a slog in a post-apocalyptic city where the color palette only includes shades of gray and eventually takes you to castles, deserts and jungles as you collect various items and meet a colorful cast of characters along the way. The most memorable of the bunch includes The Watcher, voiced by Mark Hamill. He serves as your sidekick, so you never feel alone throughout your journey.

Darksiders‘ biggest strength is its focus on exploration and puzzle solving. The first hour of gameplay focuses on combat, which is the weakest part of the game. Even in 2010, the combat felt dated, especially when you compare it to its vastly superior sequels.

When you eventually reach the game's various dungeons is where the game really shines with its focus on puzzles. None of the puzzles ever frustrated me and there is little walking around in circles. While there is some backtracking to use some of your new items to reach previously inaccessible points, it never feels like busy work. At the end of a dungeon, you are greeted with a boss, with the best boss in the game being a giant sand worm that you face on horseback.

Earlier I stated that the marketplace is flooded with low effort remasters, thankfully, Darksiders: Warmastered is not one of them. There's nothing more disappointing than revisiting a game you have fond memories of, and it looking much worse than you remember it. I remember Darksiders looking good, but Darksiders: Warmastered looks great. The colors looked muted in the original, but now, the colors pop. War looks like a character ripped straight out of a 90's comic book, and the new graphics highlight this. This is unsurprising considering the game's creative director. Besides the screen tearing that is a hold over from the original release, Darksiders: Warmastered is one of the best looking remasters for this generation. Below are two comparison shots, but the game looks even better in motion.

At a value price of $20, Darksiders Warmastered Edition is a must buy for anyone who has never played the original. While the combat leaves much to be desired, the dungeons and impressive new graphics make the trip through the apocalypse worth it. But for anyone who's already experienced War's journey, there is no reason to come back for a second helping.

Darksiders: Warmastered Edition for the Xbox One was provided by the publisher for review.